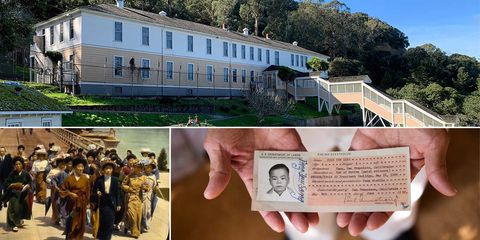 A short ferry ride from San Francisco or Tiburon, Angel Island is a picturesque destination for hikes or bike rides. But later this fall, the rugged little island will also offer a timely (and free) crash course on U.S. immigration. Located in the very place where so many people first landed when coming to America, the new Angel Island Immigration Museum provides a broader perspective on this fundamental American rite of passage, which continues to be fraught with controversy.

Once the main port of entry for immigrants on the West Coast, Angel Island maintains a low-key profile as the “Ellis Island of the West.” An estimated half a million people, a third of whom were from Asian countries, came through here from 1910 to 1940, but unlike Ellis Island, Angel Island’s history is about exclusion.

The station was built to enforce the Chinese Exclusion Act of 1882, the first U.S. law to restrict immigration by nationality, permitting only relatives of American citizens and people of certain professions. Instead of being welcomed to their new home, Chinese immigrants were detained for weeks and interrogated; an estimated 11 to 30 percent of detainees were deported.

Stuck inside rough wooden barracks on the island, would-be immigrants inscribed hundreds of poems on the walls, the carved Chinese characters resisting efforts to paint them over. (In 1970, when the California State Parks system wanted to raze the site and put in a campground, rediscovery of the historic graffiti saved the buildings.) For a modest fee, visitors can tour the original barracks, see the poem-covered walls and cramped conditions experienced by the detainees—and understand that anti-Asian sentiment, fresh as today’s headlines, has a long historical precedent.

Tensions around immigration aren’t limited to the past, which is where the new museum comes in. Following a $15 million, seven-year rehabilitation of the dilapidated building, the station’s 10,630-square-foot former hospital offers a look at U.S. immigration since Angel Island days. Highlighting exclusionary policies and periods of openness and reform, it’s an enlightening experience for all. One startling graph shows how widely the number of documented immigrants has varied over the past 40 years. Visitors learn that the U.S. operates the world’s largest immigration detention system, but also that between 1975 and 1999, the U.S. resettled an estimated 2.3 million refugees, more than the rest of the world combined.

Audio recordings underscore the effects of major geopolitical events on individual people like the journalist Thuy Vu, who left Vietnam after the fall of Saigon in 1975:

Looking at the latest news from Afghanistan, I’m reminded of how much people are willing to lose in pursuit of greater freedom, and what we could have done—and still can do—to help.•

Visiting info: The historic barracks building is currently open; the new museum, a member of the International Coalition of Sites of Conscience, is anticipated to open by the end of October. Check schedules beforehand.

The Blue & Gold Fleet offers ferry service from Pier 41 in San Francisco; the Angel Island Tiburon Ferry operates from Tiburon. To get to the immigration station from the ferry, stop at Ayala Cove. It’s a short but initially steep one-mile hike: look for the North Ridge trailhead just to the left of the buildings after disembarking, climb the steps, and make a left onto the paved Perimeter Road. Shuttle service ($11 round-trip) is also available; tickets are available from the Angel Island Cafe.