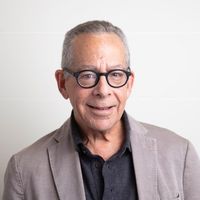 David Ansen was a movie critic for Newsweek from 1977 to 2008. He was the Artistic Director of the Los Angeles Film Festival from 2010 through 2014. He is currently the Lead Programmer of the Palm Springs International Film Festival. He has written documentaries for TNT, HBO, and PBS on Greta Garbo, Groucho Marx, Bette Davis, and Elizabeth Taylor, and has written for the New York Times, the Los Angeles Times, Entertainment Weekly, Vanity Fair, Interview, Cosmopolitan, and other publications. In the 1990s he served for 8 years on the selection committee of the New York Film Festival.

Not Feeling The Force
Longtime movie critic David Ansen has a confession: He’s not wild about the “Star Wars” movies. And that doesn’t sit well with fans of …
By David Ansen
Advertisement - Continue Reading Below