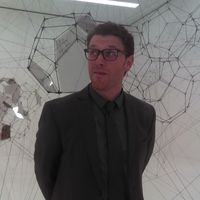 Ian A. Stewart is a writer and editor in San Francisco. He is former articles editor of San Francisco Magazine, winner of the National Magazine Award for General Excellence in 2018. His work has also appeared in the New York Times, Alta, and many other magazines, newspapers, and websites—including, once, Hustler! He has also worked for several companies and nonprofits. He received his master's of journalism from UC Berkeley.