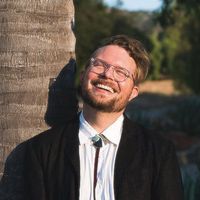 Chris Martins could’ve been a mathlete, but to his high school calculus teacher’s dismay, he chose a path that instead led to road-tripping with Digital Underground, dining on sushi with Dustin Hoffman, and going to church with Justin Bieber. Along the way he racked up bylines in places like Playboy, Los Angeles Magazine, Flaunt, Billboard, Complex, and Rolling Stone, plus did things that at least resemble jobs, including working every editorial position at Filter magazine, and running SPIN’s furiously paced digital newsroom. Despite having once been paid actual money to sample L.A.’s finest cheeses, this Bay Area native knows his place is with the storytellers. (Sorry, Mr. Barrows.) He recently joined the Third Bridge Creative agency.

It’s All in the Details

A new production of Frankenstein brings the audience to life—as well as the misunderstood monster.