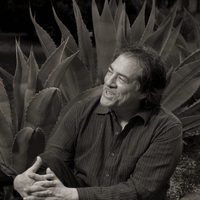 Dagoberto Gilb is the author of nine books, including The Magic of Blood, The Last Known Residence of Mickey Acuña, Woodcuts of Women, Gritos, The Flowers, and Before the End, After the Beginning. Among his own writing’s honors are the PEN/Hemingway Award, a Guggenheim Fellowship, a National Endowment for the Arts Fellowship, and a Whiting Writers Award; his work has been a finalist for the National Book Critics’ Circle and PEN/Faulkner Awards and has been honored several times in Texas as a proud part of its literary tradition. His fiction and nonfiction have appeared in the New Yorker, Harper’s, Best American Essays, O’Henry Prize Stories, and many others, much of it widely reprinted. Gilb spent sixteen years making a living, as a father of two children, in the construction trades, twelve of them as a journeyman high-rise carpenter with the United Brotherhood of Carpenters and Joiners. Born and raised in Los Angeles to an American father and a Mexican mother, he has lived as long in both El Paso and Austin, now Mexico City.

Whether by fortune or doom or absolute devotion, a young man’s mad, burning love for a married woman is requited in this story from Dagoberto Gilb.