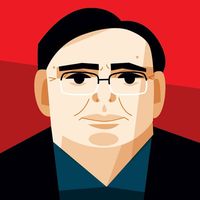 Peter Rainer is film critic for the Christian Science Monitor and NPR. He was a finalist in 1998 for the Pulitzer Prize in Criticism and is editor of the essay collection Love and Hisses and the author of Rainer on Film: Thirty Years of Film Writing in a Turbulent and Transformative Era. He was the writer and co-producer of the A&E Biographies on Sidney Poitier and the Hustons. A former chairman of the National Society of Film Critics, he has served as film critic for the Los Angeles Herald Examiner, Los Angeles Times, Los Angeles magazine, New Times, and New York magazine, and his work has also appeared in such publications as the New York Times Magazine, GQ, and Vogue. He is a three time winner of the National Arts and Entertainment Journalism Award for best online critic. He has taught and lectured on college campuses worldwide and was on the main jury for the Venice and Montreal film festivals.

Four Films That Shaped a Critic

These diverse films, from directors of different nationalities, offer important lessons on the why and how of film and filmmaking.

Connecting with an idol summons the early ecstasy of falling in love with movies.