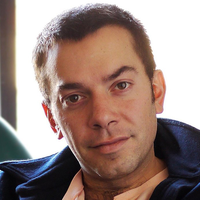 Geoffrey Gray is a New York Times bestselling author, longtime investigative reporter and the current founder and publisher of True Mastery, which specializes in adventure tales and interactive, real-life games. Known for his eclectic range of subjects and gonzo spirit, Gray started his writing career covering boxing for the New York Times and later specialized in unsolved crime, travel, food writing and more as a contributing editor at New York magazine. He has also produced two feature documentary films, Patrolman P., and GORED, which premiered at the Tribeca Film Festival and debuted on Netflix. He is currently working on 9 Arches, a new adventure card game, lives (most of the time) in the colonial highlands outside Mexico City, and once drove an ice cream truck.

Finding the Bones of Ambrose Bierce (or Not)

A high-tech hunt in the Mexican desert for the site where the legendary San Francisco writer was murdered.

By Geoffrey Gray
Advertisement - Continue Reading Below
How Ambrose Bierce Met His Bitter End
The imagined last moments of the Civil War veteran and journalist as a human comedy replete with unrequited love, gunfire, and a twiste…
By Geoffrey Gray
The Fortune-Teller’s Tiles

Wanugee and his Mahjong tiles help his clients find answers in these uncertain times.