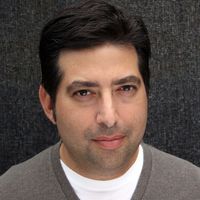 Tod Goldberg is the New York Times bestselling author of over a dozen books, including Gangsterland, a finalist for the Hammett Prize, Gangster Nation, The House of Secrets, which he co-wrote with Brad Meltzer, and Living Dead Girl, a finalist for the Los Angeles Times Book Prize. His essays, journalism, and criticism appear regularly in the Los Angeles Times, USA Today, and, recently, Alta, have won five Nevada Press Association Awards and have been anthologized in Best American Essays. He's the cohost of the popular podcast Literary Disco, named a best literary podcast by the Washington Post, The Guardian, and Good Housekeeping, and is a professor of creative writing at the University of California, Riverside, where he founded and directs the Low Residency MFA in Creative Writing & Writing for the Performing Arts. His next book, The Low Desert: Gangster Stories, will be released in 2021, if we make it there, followed by the novel Death of a Gangster in 2022.

The Salton Sea is one weird place. That may be why so many works of literature keep trying so hard to figure it out.