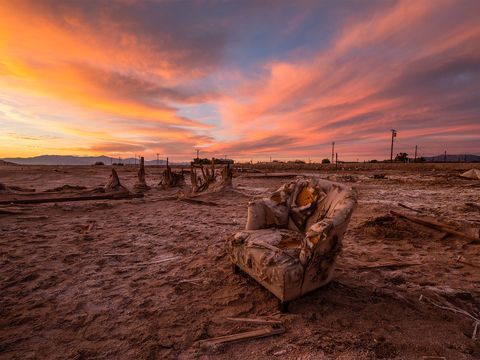 A few months ago, I drove 30 minutes from my home in Indio to the shores of the Salton Sea to see an art installation. Thirty years ago…20 years ago…15 years ago…hell, 7 years ago, that sentence would have seemed absurd. No one went to the Salton Sea for anything, much less art. But as California’s great inland sea—and its most profound environmental mistake—has begun to die more rapidly, it has become ripe for metaphor. Here exists folly, it screams out, come interpret it while it lasts! On this day, here existed, as part of the site-specific exhibition Desert X, an installation called A Point of View, by the Colombian artist Ivan Argote: a circle of stairways to nowhere, reaching into the sky surrounding the north shore of the sea.

From the ground, the stairs seemed benign—16 steps up to a five-foot-wide platform, no railing—but then you climb them, and suddenly you’re thrust into the desert sky, and it’s hard not to feel uneasy. You think: I could die out here. And that’s the truth. You could die out here. Because everything appears to be dying out here. Even the air has a suggestion of death, from the stench of the tilapia (whose bones crunch along the desiccated shoreline) to the remnants of a winter of dead birds (victims of avian cholera) and the hydrogen sulfide gas (often at dangerous levels) wafting off the sea. If you fell, on most days, it might indeed be a long time before someone found you, only the burning sun to keep you company.

At least until the coyotes showed up.

And the biting flies.

“What planet have I landed on?” the narrator of Gayle Brandeis’s novel The Book of Dead Birds wonders after stepping out of her car to encounter the sudden beauty of the sea’s “flat shimmer”—and the redolence of decay mixed with the “environmental” odor of agricultural runoff. It’s a jarring juxtaposition, a desert ocean surrounded by the pockmarked Chocolate Mountains; the question Brandeis raises is not an uncommon one. In Into the Wild, Jon Krakauer calls the Salton Sea an “otherworldly” setting where “snowbirds and drifters and sundry vagabonds congregate.” William T. Vollmann, in Imperial, an epic dissection of the region, lands early on the word ghastly and sticks with it. This place can’t be real. But it is. In truth, the Salton Sea is a uniquely American disaster.

The Salton Sea has existed, in its current form, only since the Colorado River flooded the Salton Basin in 1905. But plans to rewild the basin go back as far as the 1800s, with everyone from the government to development companies to your average grifter wanting to get into the game. Once the sea was here, all 400 square miles, it only made sense to develop it, although this too may have been an idea for another planet, because no earthling would have forgotten to factor in…you know…the salt?

“There will always be people like my mother who love a mistake,” Marisa Silver writes in her 2007 Salton Sea novel The God of War, “who will claim it, coddle it, and grow it until it has a purpose of its own, until they forget its erroneous beginnings and it becomes something necessary, something they can’t live without.” At first, the sea was loved. But then, as the bare fact of its existence became apparent (there was never supposed to be water here), the money people pulled up stakes. (A few left their stakes. You can still see them, jutting from the sand.)

I grew up a few dozen miles away, in Palm Springs, during the 1980s. As teens, we’d drive out from our homes on pristine golf courses, slice east through the fields of dates and other produce, and disturb the abandoned dreams of Desi Arnaz and Jerry Lewis, prowling the old yacht club, drinking warm beer on the veranda. You could imagine the Beach Boys performing, speedboats racing across the fastest water on the continent, Frank Sinatra in a tuxedo.

You could imagine those things. We did not. We came to forage, to escape. This was before we tried to find a narrative. This was when the sea could still be saved, but not preserved.

From Argote’s stairs, I could still glimpse those moments. The 400 square miles were now 343. This sea below sea level was sinking further each day, the state unable to address it, the bill too high—$8.9 billion by one estimate—when compared with the costs of other public concerns.

As a metaphor, it’s a stinking reality.

I come back now to be inspired by what is missing, though most visitors are here for what feels like cataclysm tourism. You can get an Airbnb at Slab City and cosplay Krakauer, spend a week pretending you’re about to decamp to meet your fate. You can park on an unfinished block of Salton City, track a low-flying Cessna, imagine that inside is Harry Bosch from Michael Connelly’s Two Kinds of Truth, trying not to let opioid dealers toss him to a shallow death. If that doesn’t appeal, just wait for the New York Times Style section to show up again. They’ve been around a few times in recent years, capturing hipsters from elsewhere in trendy clothes, celebrating a place that is Burning Man minus the fire.

It occurs to me that fashionable indifference may be the ironic stance of despair, that photographic history will immortalize a vision of this land that is not of any world at all. The stairways will be gone in a few weeks; the sea soon enough. I wonder if any piece of literature could hope to define this place. We let it be, we let it die, it was our fault all along.•

Tod Goldberg Tod Goldberg is a New York Times-bestselling author of over a dozen books, including The Low Desert, named Southwest Book of the Year; Gangsterland, a finalist for the Hammett Prize; Gangster Nation; The House of Secrets, which he coauthored with Brad Meltzer; and Living Dead Girl, a finalist for the Los Angeles Times Book Prize.
Advertisement - Continue Reading Below
More From Premium
A Road Trip Driven by the Drought
Pop Moments: Movies
Advertisement - Continue Reading Below
A Life Cleanse in the Waters of Desert Hot Springs
Reviving Indigenous Pottery
Shh! Secret Testing Grounds
Death Valley Is the New Normal
Pop Moments: Photo Shoots
In Search of the Lost Dutchman Mine
An Experiment in New Cuyama
Pop Moments: Music Videos