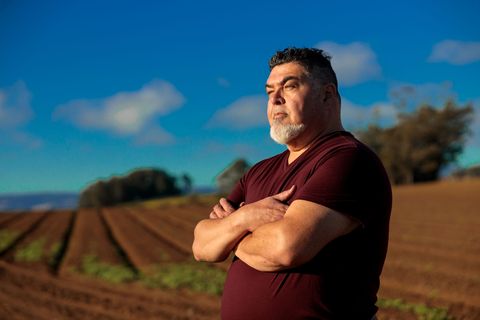 Cortez centers and celebrates the marginalized. He portrays a Mexican American farmworker community that is tight-knit but vulnerable. The largely autobiographical title character, Gordo, struggles to make sense of this world and his emerging masculine self, which he gradually realizes doesn’t fit the traditional mold. While the collection presents trenchant commentary relevant to California farmworker life today, it is also a period narrative, filled with iconic references to 1970s pop Americana that highlight the distinctive cultural world of young Chicanos from the era.

Cortez and I met in September at San Francisco’s Hyatt Regency hotel, where we found a quiet lounge with two high-backed armchairs to spend an hour exploring his craft. This interview has been edited for brevity and clarity.

You create a children’s world where adults are often only on the edges and the kids play with all kinds of roles and power struggles. How did you approach creating this world?
I was interested in the idea of what happens when kids are left to form their own society together. It was about exploring power struggles kids have and the autonomy and independence they can have, which feels striking now because ideas about child-rearing have changed so much and the idea of letting kids go off on their own and fight and make up feels alien to contemporary times. I was interested in hearkening back to that time in the 1970s and what a double-edged sword that was.

So many of your characters seem marginalized within a community that is itself marginalized. Queer characters, characters with disabilities, immigrants vulnerable to deportation, domestic-abuse survivors. Were you consciously focusing on representing marginalized characters?
I grew up surrounded by people experiencing different kinds of marginalization around immigration status, poverty, queerness, domestic violence. I’m always interested in homing in on people on the margins of economy, legality, and social acceptability. Connected to that is, everyone is trying to find home, a place to belong and a place to be safe.

How autobiographical are the stories?
They are very autobiographical. The longest story, “Alex,” is extremely autobiographical as I remember it. And the other stories have a kernel of truth that I built fiction around. Sometimes I stitched together different memories to build a story. We did have moments making fun of the Catholic church, and we did have a truckful of pastries come to the ranch once. That’s burned into my mind. And those two moments got melded into “The Jesus Donut.” The humor of this book is the humor of Catholic culture in many ways.

Can you talk about boyhood, masculinity, and queerness?
Growing up, there was an informational desert about queerness. Queer kids today have oceanic volumes of information. Gordo knows there’s something going on about gender expression and sexuality. He understands that there are gender expectations and he is not meeting them. But because he’s just being himself, he doesn’t know how to perform them. He’s scrambling not to feel marginalized or disliked for being a sissy boy. Masculinity feels elusive. In “El Gordo,” you have a jump rope; for the father, that is a pathway for turning this kid into a boxer, a hypermasculine creature that he wants to see in the world. But Gordo is thinking, I play with the girls, and I know all these jump-rope chants. And therein lies the tragicomedy of Gordo and his father. Gordo’s father cannot see his son for who he is because he’s fixated on what he thinks Gordo should be.

Can you talk about the identity, class, and status tensions in the community? The young girl Cookie says at one point, “We’re Chicanos. We’re real Americans, not beaners. We belong here forever.”
In a community of people that is pretty uniformly lower-income, there are still strata and different levels of privilege. I was interested in the nuances of the difference between a Mexican American kid and an undocumented neighbor who lives next door who is working side by side with their mom. There’s a story where Gordo’s family moves out from the migrant farmworker camp, and he talks about what it means to have a home with a flush toilet and a phone. These are markers of something that starts to look like middle class.

Kids understand hierarchy pretty early on. In the first story, none of the kids have literally even a penny on them, but one has a quarter, and that brings power and status.

Who were your literary influences? Sandra Cisneros? Sherman Alexie? There’s a lineage of those child narrators with a socially discerning eye going back to Huck Finn. And, of course, writing about working-class people in the Salinas Valley, maybe Steinbeck?
Yes, the way Sandra Cisneros builds voices for young people made an impression on me. I really enjoy Sherman Alexie, but that did not affect my writing as much. What really affected me was the writing of Toni Cade Bambara, who in her book Gorilla, My Love has young characters narrating, and those voices were so captivating to me, the combination of how a kid can have such a limited framework to understand the world and yet be so wise in the questions that they ask. Also, I love David Sedaris’s writing. His humor is impeccable.

With Steinbeck, it was such a big deal for me as a kid to read a book with references to places I was familiar with, like Salinas and Monterey. It made me think you can write about any place.•

Join us on Zoom on Thursday, December 15, at 5 p.m. Pacific time, when Cortez will join CBC host John Freeman and special guest Sandra Cisneros to discuss Gordo. Please stop by the Alta Clubhouse to let us and your fellow book club members know your thoughts about the book. Register here for the event.

Related Stories
Excerpt: ‘Gordo’
Why You Should Read This: ‘Gordo’
Why I Write: Jaime Cortez
Erik Gleibermann Erik Gleibermann is a San Francisco journalist and literary critic and has written for the Atlantic, the New York Times, the Guardian, Oprah Daily, NPR, and numerous literary magazines.
Advertisement - Continue Reading Below
More From California Book Club
A Different Kind of Bildungsroman
Don’t Call Him Gay Ulysses
Advertisement - Continue Reading Below
Excerpt: ‘Less’
California Book Club: Jaime Hernandez Transcript
Event Recap: Jaime Hernandez
Announcing the Special Guest for Jaime Hernandez
Five Books and Movies For After You Finish ‘Maggie
The Shock of the New
Literary Adventures in California: Boxwalla
My Friend Maggie