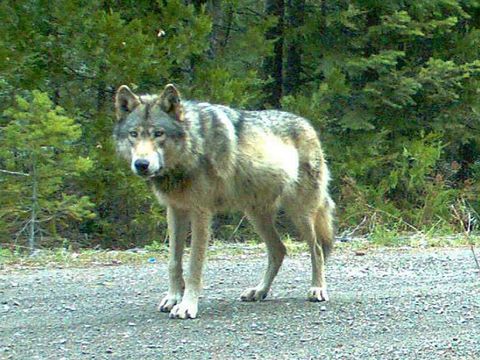 OREGON DEPARTMENT OF FISH AND WILDLIFE

It’s impossible to know what the wolf was feeling as she awakened from a deep slumber on that warm summer day in 2006. Did the silver-gray beast notice the radio tracking collar now adorning her neck, affixed by biologists while she was unconscious? Either way, when the drugs wore off, she simply lumbered away into the distance. Nobody could have known that the animal from then on called B-300 would make lupine history as the matriarch of a family tree that spans Idaho, Oregon, and California.

B-300 hailed from the Timberline Pack, which roamed a territory east of Idaho City. From there, she went west, crossed the Snake River, and sank her paws into Oregon soil, where state wildlife officials, conducting an aerial survey, spotted her in January 2008.

By the next year, B-300 had settled down with an uncollared, unnamed male. Like her, the wolf with jet-black fur had risked death traversing the Snake River from Idaho. After their first litter of cubs was confirmed in the summer of 2009, the Oregon Department of Fish and Wildlife christened the family the Imnaha Pack, the first to call the Beaver State home in 60 years. When biologists later outfitted B-300 with a fresh collar, she was also given a fresh name: OR-2. The male was collared in 2010 and given the name OR-4.

OR-2 and OR-4 would live the rest of their days among the conifers of northeastern Oregon (OR-2’s radio collar signal gave out in 2013; OR-4 was shot to death by the ODFW in 2016 after being associated with livestock depredation), but their offspring would inherit their wanderlust. Most wolves stay within 60 miles of their birthplace, but one of the pair’s pups was born to explore. A few days after Christmas in 2011, the broad-shouldered OR-7 crossed into California near the town of Dorris—more than 300 miles from his parents’ territory. His were the first wolf paw prints to grace the Golden State in nearly a century.

OR-7’s California sojourn took him through the southern Cascades and across the lava-rock-studded Modoc Plateau. His howls echoed among the junipers and ponderosa pines blanketing Lassen and Plumas National Forests. Not a single livestock loss was reported; as wolves go, he was a model citizen.

OR-7 played hopscotch with the Oregon-California border before eventually settling in Oregon’s Jackson and Klamath Counties. When remote cameras revealed that he had become a father in June of 2014, the Rogue Pack became official. Meanwhile, in Sacramento, the California Fish and Game Commission voted 3–1 to protect wolves under the state endangered species act, a radical decision given that wolves had not yet taken up permanent residence.

By the spring of 2020, the 11-year-old OR-7 was presumed dead. Most wolves die of natural or human causes by their eighth birthday, so his surviving past a decade is a feat worth celebrating. And while he spent only about a year altogether in California, this brave wolf blazed a trail for others to follow.

The Lassen Pack of Lassen National Forest is the only wolf family to call California home.
U.S. Forest Service

Today, only one wolf family calls California home: the Lassen Pack. Its original so-called alpha male (more accurately referred to as the breeding male) was OR-7’s son, a grandson of B-300, and a descendant of the wolves first reintroduced into Idaho in the mid-1990s. He was known as CA08M.

“Through [GPS] cluster data and scat, we know that they’re eating deer most of the time. There is cattle in there, but wolves are able scavengers, more than happy to feed on a cattle carcass, so those are in the mix, too,” says Kent Laudon, the only full-time wolf biologist employed by the California Department of Fish and Wildlife—and the first in perhaps a century to hold that job description—of the Lassen Pack. They are living proof that wolves can thrive, mostly peacefully, in California.

There aren’t good estimates for how many wolves made a home in California prior to European colonization, but linguistic evidence suggests they were widespread: most of the 80 Indigenous languages spoken there by the late 1700s had separate words for wolves, coyotes, foxes, and dogs, the four types of canids then found in California. The state’s then-last wild wolf was killed in 1924.

Fast-forward a century. With a new litter of pups confirmed in July, wildlife officials estimated that the Lassen Pack now comprised 14 individuals. Not long after CA08M disappeared sometime last summer, an unfamiliar black-furred male was seen with the Lassen Pack’s breeding female; this year’s pups are his progeny. Other young wolves dispersing from Oregon now routinely visit California, but so far none have taken up permanent residence. The Lassen Pack seems to be resilient, but it is not yet time to celebrate; the wolves’ foothold in California remains tenuous.

Consider the Shasta Pack, which once occupied eastern Siskiyou County. It lasted just a few years, producing only a single litter of pups. Nobody knows exactly what happened, but it’s likely that one or both of the parents died or were illegally killed. According to a 2010 analysis, more than a third of wolf packs that suffer such a loss simply disintegrate.

Most of Oregon’s wolves hold territories in the northeastern area of the state, Laudon explains. The Rogue Pack, found just across the state line from California, reigns some 200 miles away from other Oregonian wolf packs. That distance is too great to maintain any consistent flow of the animals—and their genes—into California. “So we’re not ideally connected to have a lot of dispersers here,” says Laudon, even though some are clearly bitten by the travel bug.

For Laudon, the unhurried migration of new wolves into Northern California is a good thing: it means ranchers can slowly learn how to coexist with the toothy carnivores, a task their own grandparents might never have faced. “The time that’s the hardest is the new period, when people don’t have their own experience with them,” he says. “Of course sometimes wolves mess up, but it’s also important to know how much they don’t depredate. It’s always been interesting to those of us that work with wolves that they don’t [kill livestock] more often.”

Nobody knows what it is that pulls or pushes a young wolf to light out for a new territory. Most rely on their keen noses to sniff out nearby wolves, or they listen for howls in the distance. Like us, wolves thrive on family and teamwork; by their nature, they are not loners but intensely social. And yet some apparently crave the same sort of adventure and mystery that pushes our own species to seek out new lives in strange lands. Indeed, were it not for B-300 and OR-4, California might still be a place where wolves were known only as fairy-tale villains.