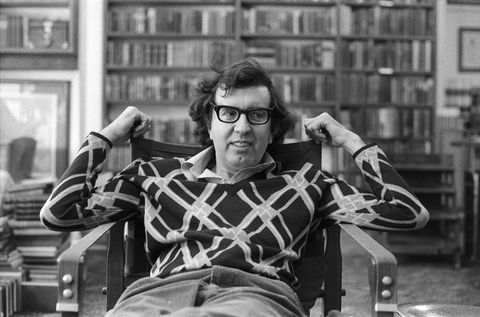 If you had asked the author Larry McMurtry, who died last week at the age of 84, how he’d want to be remembered, he would not have mentioned writing his novels The Last Picture Show, Terms of Endearment, and Lonesome Dove or the screenplay for Brokeback Mountain. He’d have told you he was a man who bought and sold books. And that’s putting it mildly: he was obsessed with the physicality of books; not nearly as much with their authors, as he was with their readers and owners.

In 1971, even as he was theoretically chained to a typewriter in Hollywood, cranking out the script for The Last Picture Show, he boarded a red-eye home to D.C. to purchase a trove of books at an auction. The next month, with these acquisitions and a business partner, Marcia Carter, he opened Booked Up in Georgetown, a used-book emporium that would enjoy a 22-year run in a town that operates on four-year cycles and fundamentally distressed McMurtry because, according to him, too many homes he visited had far too few volumes sitting on shelves. It was almost as if he was saying: Show me your bookshelf (make that plural), and I’ll tell you who you are.

A year or two into the Booked Up odyssey, my then–Washington Post colleague Ken Turan, a great lover of antiquarian bookshops, spent several hours drifting through the three floors of the store. The location had once been an apartment building, with nine separate apartments, and now every room of every apartment was stacked with books, floor to ceiling. Turan would eventually become the chief film critic of the Los Angeles Times, and although he is a great champion of overlooked gems, he is perhaps best known for a negative review of Titanic that resulted in a diatribe from director James Cameron to the newspaper, calling for Turan’s prompt ouster. Which, needless to say, did not happen. Here is the perfect expression of Turan’s knowledge and love of cinema: in one of those stuffed rooms at Booked Up, Turan came across a copy of James M. Cain’s novel The Postman Always Rings Twice, privately printed for the film’s 1946 premiere and personally inscribed from Cain to the film’s star, Lana Turner. Turan was flabbergasted—both by the unique nature of the item and its $900 tag. He took the book down to the front desk and explained to the proprietor why he absolutely had to have this item, and why he absolutely couldn’t afford the nosebleed price. After a certain amount of hemming and hawing. McMurtry told Turan he was extending to him a one-time enthusiasm discount: half price. Turan bought the copy, and still has it. (For my money, the unauthorized Italian version, Ossessione, made in 1943 by Luchino Visconti, is the one to see.)

My own, not nearly as notable, intro to McMurtry came perhaps a decade later. McMurtry seemed to like journalists. He thought we were all readers (not necessarily true), with Post columnist Joe Alsop at the pinnacle of his A-list. At another now sadly departed Georgetown bookstore, the Savile, the shop’s extraordinarily erudite clerk Sasha Stepanovic, who had acted with Ionesco in their Romanian youth and managed its paperback section (where he kept books arranged by publisher, not by author!), had recommended a French novel, Le Grand Meaulnes, which had been published in a translated Doubleday paperback under the title The Wanderer. I loved it. One day I walked into Booked Up and mentioned I was looking for a French copy of the book. “You are in luck,” McMurtry told me. “I have a very rare copy of a first edition from 1913, signed by the author.” I bought it, for $150. McMurtry asked how I had heard about the store. “One of my colleagues from the Washington Post mentioned you to me.” I could see the wheels spinning in his head: The Lana Turner guy? The Lana Turner guy?

A Texan by birth, Larry McMurtry often set his novels in his home state, covering a range of topics from coming of age in the 1950s to family drama to the Old West.
Alta

McMurtry asked what I thought at the time was an odd question: Do you own a lot of books? I mused for a while and replied, “That’s a very relative question. Maybe 4,000?”

“You must have a big apartment,” McMurtry said.

“Actually, I live way out in Loudoun County, in a 200-year-old farmhouse. It’s about 4,000 square feet, and it’s pretty much full of books.”

“I live in Loudoun as well,” McMurtry told me. “You must invite me over to see your books.”

And thus was born a somewhat odd acquaintance, of journalist and novelist, that revolved almost purely around books, physical books, and the people who own them. I do not remember a single discussion of content. We both lived in the country about 10 miles apart, some 50 miles west of Washington, and would occasionally meet at a Greek diner, the White Palace, in the town of Purcellville, roughly equidistant from our respective homes.

What always surprised me about McMurtry was that, unlike most neurotic, narcissistic writers, he rarely, if ever, wanted to talk about his own work: it was always some person who had come into the shop, or a book he had almost acquired. Here is classic McMurtry, from an article he wrote for the Washingtonian magazine in 2008: “We had just bought an excellent library from a crusty retired diplomat with a younger and very beautiful wife. In a room on a lower floor of his house, there were at least a million dollars’ worth of bird books, but these belonged to the diplomat’s former wife. We weren’t allowed to touch them. Still, we bought a carful of very nice books—though I remember with longing the one we didn’t get: a beautiful copy of T. E. Lawrence’s Seven Pillars of Wisdom, worth $50,000 these days.” There are many more tales like this in Books: A Memoir, which McMurtry wrote about all those years of buying and selling. It's hard to say it's a better read than the masterful Lonesome Dove, but it certainly is the purest expression of who the guy really was.

One night McMurtry asked me if I had a favorite volume, one I could never let go. This was perhaps five years after I had purchased from him the first edition of the French novel. “I hope you’re going to tell me it’s the copy of Le Grand Meaulnes I sold you,” he said. How many tens of thousands of books had he sold over the ensuing five years, and he remembers this single one?

Actually, it’s not, I told him.

In 1980, I approached Bill Garrett, editor of National Geographic, with a proposal. The following year would be the 50th anniversary of the first great circle flight ever attempted, a journey north from Long Island to Alaska and ultimately down to Nanking, flown by Charles Lindbergh, accompanied by his wife Anne Morrow Lindbergh. I wanted to re-create the flight and write about it. Although the Geographic allowed me to buy a plane, and have it modified with bigger fuel tanks so it could handle its longest leg, from Nanking to Honolulu, the trip never happened. There was a diplomatic dispute between the then-U.S.S.R. and Japan, both of whom claimed ownership of the Kuril Islands, one of the places the Lindberghs had landed. The Soviets refused to provide flight clearance unless I landed in the Kurils; the Japanese refused entry if I did so. As part of my reporting for the piece, I had lunch with Mrs. Lindbergh at her Connecticut home. Among the topics we discussed was the 1932 kidnapping of her son Charles Jr., whose body had never been found. I knew that a number of men had made claims to be the child and asked if she ever wondered whether one of them might actually be the boy. This was perhaps five years before DNA testing was introduced and 10 years before she died. “Every time I get a letter about that,” she said, “it breaks my heart, wondering whether it might be true or if it’s just some kook. But even meeting with them is too emotionally daunting.” She took a copy of her book North to the Orient, about the great circle flight, from a bookshelf and inscribed it thus:

“For Tom Zito, with best wishes for a successful journey North to the Orient, and with whom I have shared my greatest fear.”

“Don’t ever sell that one,” McMurtry said. But he already knew that wouldn’t happen.

The last time I saw McMurtry was on a visit to D.C. in the early ’90s, when I stopped into Booked Up. His son, James (a singer and songwriter), had left home, and McMurtry had sold his place out in Loudoun and was now living in an apartment over the bookshop. “You’re not going to believe this,” he told me. “But I’ve discovered that I’m having trouble writing. I used to do a lot of thinking in the two hours of driving into D.C. and back out to the country. But that’s gone. So now I’m getting into my car and driving around the Beltway late at night, looking for inspiration.”

In March 2006, McMurtry and Diana Ossana won the Best Adapted Screenplay Academy Award for their work on turning Annie Proulx’s New Yorker short story into the script for Ang Lee’s film Brokeback Mountain. At a party after the ceremony, Patrick Goldstein, who was among the reporters covering the event, introduced himself to McMurtry and mentioned that he worked at the L.A. Times.

This content is created and maintained by a third party, and imported onto this page to help users provide their email addresses. You may be able to find more information about this and similar content at piano.io
Advertisement - Continue Reading Below
More From Books
Brave New World
Excerpt: ‘The Devil’s Dictionary’
Advertisement - Continue Reading Below
Locked Down
The Agony and the Ecstasy
Let’s Talk About Sex
Excerpt: ‘Fox & I: An Uncommon Friendship’
Call of the Wild
12 New Books for July
Life Lessons
Future Shock