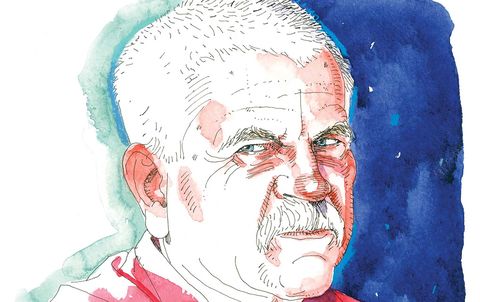 Mike Davis, who died on Tuesday at age 76 of esophageal cancer at his home in San Diego, taught me to speak Los Angeles. I mean that in the most literal sense. If we imagine, as I do (and Davis did), cities as their own vernaculars, then the Southern California megalopolis represents a lexicon that is particularly complex.

“Stretching now from the country-club homes of Santa Barbara,” he wrote in the prologue of City of Quartz: Excavating the Future in Los Angeles, “to the shanty colonias of Ensenada, to the edge of Llano in the high desert and of the Coachella Valley in the low, with a built-up surface nearly the size of Ireland and a GNP bigger than India’s—the urban galaxy dominated by Los Angeles is the fastest growing metropolis in the advanced industrial world.”

That book, published in 1990, established Davis as the inheritor of a contrarian (which is to say: anti-booster) tradition of Southern California thinking; his antecedents include Louis Adamic and Carey McWilliams. It was also, in no small part, responsible for him being named a MacArthur Fellow in 1998. His vision of the place was of a gluttonous and rapacious landscape, “encompassing six counties and a corner of Baja California, and clustered around two super-cores (Los Angeles and San Diego–Tijuana) and a dozen major, expanding metro-centers.” City as nation-state, in other words, as Rosecrans Baldwin would argue in his 2021 book, Everything Now: Lessons from the City-State of Los Angeles.

Davis created a metaphor, or a bit of framing, that recast everything.

To understand why, it’s important to remember the culture in which City of Quartz appeared. At the time, as Davis pointedly noted, Southern California was in expansionist mode. For this reason, he began the book in the Antelope Valley, where Palmdale, “the fastest growing city in California for most of the 1980s,” was once the intended site of a never-built intercontinental airport, meant to ease congestion at LAX. That all this would have happened 70 miles north of downtown Los Angeles tells us everything we need to know about how the megalopolis imagined itself. “A city 70 miles square but rarely 70 years deep,” Reyner Banham declared in Los Angeles: The Architecture of Four Ecologies, published in 1971, although it took not even half a century for that to fall apart. By 2019, in her novel Your House Will Pay, Steph Cha would write what might be read as the Antelope Valley’s epitaph: “Los Angeles, this was supposed to be it. The end of the frontier, land of sunshine, promised land. Last stop for the immigrant, the refugee, the fugitive, the pioneer.… But he had left, and so had most of the people he knew. Chased out, priced out, native children living in exile.”

To his credit, Davis was aware that Los Angeles had limits. It was, we might say, the central thesis of his work. Even in the late 1980s, he understood, there was an endpoint to the sprawl; Southern California was not Trantor, the planet-city of Isaac Asimov’s Foundation series. Seventy miles turned out to be too much. Instead, observed the architect Michael Maltzan, “the prototypical suburban context of the city has given way to an emerging context of real physical intensity and population density.… Easy mobility decreases as the freeways turn into virtual gridlock well before and well after the traditional rush-hour expectations.… Now the bounding perimeter of the city has been hit, and perceptual, psychological, and physical limits of what it means to be in Los Angeles have arrived.”

What this suggests is the foundational significance of Davis’s work.

Among the essential concepts in City of Quartz is that of “the master dialectic of sunshine and noir,” which I continue to believe is a necessary lens through which to consider the dichotomies of the place. The idea is that Los Angeles exists in a constant state of tension, between its Edenic aspirations, on the one hand (the sunshine), and, on the other, the harsher (or noirish) realities of urban life. For Davis, this was not merely a matter of interpretation but rather a way of seeing, and thinking about, the vast disparities of the city, in which, as he wrote, “social polarization has increased almost as rapidly as population,” with affluence nearly tripling even as poverty grew by a third. “The ultimate world-historical significance—and oddity—of Los Angeles,” he would argue, “is that it has come to play the double role of utopia and dystopia for advanced capitalism. The same place, as Brecht noted, symbolized both heaven and hell.”

In the more than three decades since the book was published, these divisions have only become more pronounced.

And yet, City of Quartz was, for Davis, less a definitive statement than a starting point. (It was his second book, after Prisoners of the American Dream: Politics and Economy in the History of the U.S. Working Class, which came out in 1986.) He got some things wrong, most notably in his account of “post-liberal Los Angeles” as “Fortress L.A.”—a place both guarded and gated, in which “the carefully manicured lawns of Los Angeles’ Westside sprout forests of ominous little signs warning: ‘Armed Response!’ ” In the contemporary city, such “new repressions,” while prevalent, are less overt; just think of the gentrification of Downtown and the renewed attention to mass transit for a sense of how this works.

Meanwhile, Davis kept writing. In 1998, he followed City of Quartz with the magnificent Ecology of Fear: Los Angeles and the Imagination of Disaster, which sought to untangle the apocalyptic strains of Southern California life, arguing that the region’s ongoing development was the result of a willful disregard for the forces, geologic and otherwise, that have always determined the way we live here. “What is most distinctive about Los Angeles,” he wrote, “is not simply its choreography of earthquakes, wildfires, and floods, but its uniquely explosive mixture of natural hazards and social contradictions. Not even Miami, that other fallen paradise, can approach the conflagrationist potential of Los Angeles.”

By then, we had all seen the effects of such “conflagrationist potential.” The fires and floods of the early 1990s, the Northridge earthquake, the 1992 insurrection after four Los Angeles Police Department officers were acquitted in the beating of motorist Rodney King. If City of Quartz—which was published less than six months before the assault on King and a year and a half before the verdict—appeared prescient, Ecology of Fear was a look through the other end of the telescope.

Still, what is prescience but a form of paying attention? Davis didn’t create the issues he sought to highlight, but he had the presence to catalog them. Like McWilliams, writing about the Zoot Suit Riots or the Sleepy Lagoon murder case to underscore the scourge of anti-Mexican discrimination, he identified situations that were in plain sight: the power dynamics between Downtown and the Westside, the booster era, the rise of Hollywood. In Ecology of Fear, he juxtaposed “the public subsidization of firebelt suburbs” such as Malibu with the issues facing another Los Angeles firebelt, the Westlake district, where immigrant families crowd apartment buildings that regularly go up in smoke. “Needless to say,” Davis pointed out, “there is no comparable investment in the fire, toxic, or earthquake safety of inner city communities. Instead, as in so many things, we tolerate two systems of hazard prevention, separate and unequal.” Provocatively, he named the chapter that addresses these disparities “The Case for Letting Malibu Burn.”

Here, we see Davis’s political commitment, his sense that writing could be a form of seeking justice, if not necessarily a source of hope. In July, after he announced that he was stopping treatment for his cancer, he gave an interview to the Los Angeles Times, in which he rather explicitly made that point. “To put it bluntly,” he told Sam Dean, “I don’t think hope is a scientific category. And I don’t think that people fight or stay the course because of hope, I think people do it out of love and anger. Everybody always wants to know: Aren’t you hopeful? Don’t you believe in hope? To me, this is not a rational conversation. I try and write as honestly and realistically as I can. And you know, I see bad stuff. I see a city decaying from the bottom up. I see the landscapes that are so important to me as a Californian dying, irrevocably changed. I see fascism. I’m writing because I’m hoping the people who read it don’t need dollops of hope or good endings but are reading so that they’ll know what to fight, and fight even when the fight seems hopeless.”

And Davis was a fighter. He kept fighting until the end. He went on to write 20 additional books, including two adventure novels for young readers and a series of inquiries into Las Vegas, El Niño, avian flu, and the car bomb. If none of these titles landed like his early efforts, what did it matter? He was a work in progress, not unlike the city at the center of his oeuvre. In 2020, he turned his eye back to Los Angeles, collaborating with UC Irvine historian Jon Wiener on Set the Night on Fire: L.A. in the Sixties, a historical magnum opus that sought to trace a series of events and liberation movements that together added up to a shadow history of Southern California, as told through both its communities of color and its radical constituents.

“If I have a regret,” Davis acknowledged in that Times interview, “it’s not dying in battle or at a barricade as I’ve always romantically imagined—you know, fighting.” The attitude is one with which I have an abiding sympathy. All the same, in facing down his mortality, he died as he had lived: engaged, committed, and without illusion.