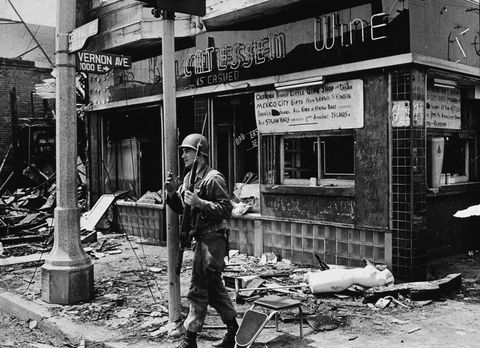 There are only a few fiction titles that cover Los Angeles’s 1965 Watts Rebellion, and Nina Revoyr’s Southland is one of them. The novel—which Alta’s California Book Club will discuss at its March 18 gathering—follows a twentysomething law student, Jackie Ishida, as she attempts to solve the murder mystery of four Black American boys found dead in a freezer owned by her grandfather, with the help of James Lanier, a cousin of one of the boys.

Southland takes place in the Crenshaw district and formally moves between 1994 and the early-to-mid-20th century to unearth and detail generations of obscured and untold history. Over the course of the novel, we learn of the rich exchange between Black American and Japanese American communities there. The Watts Rebellion—six days of riots in protest of police abuse and discrimination—becomes the catalyzing moment of the novel not only because it is the period in which the bodies of four Black boys are found but because it shows how the histories of Black and Japanese American communities were entwined and entangled, even as they appeared disparate.

The Watts Rebellion, however, is not the only historical moment that Southland covers: the novel also details the history of Japanese internment camps during World War II. This context becomes quite important, since the expulsion of Japanese American citizens from the Los Angeles area allowed Black Americans to move into the areas they’d occupied, which dramatically shifted the demographics of the city. As a consequence, strong efforts to impede Black people from living in other neighborhoods emerged, further stoking racial divides and tensions.

More than that, though, Southland offers a different perspective on the relations between two minority communities. Not only do we come to understand the (parallel) history that led to the Watts Rebellion, but we are also given the opportunity to attend to the networks of solidarity, connection, and friction that are not often included in dominant historical narratives.