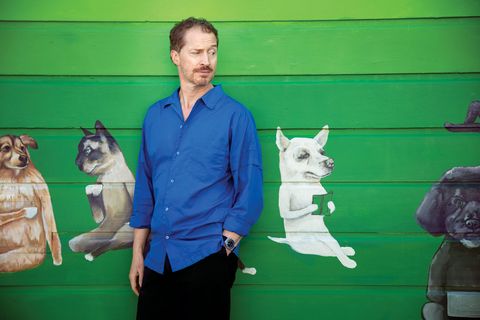 I am going to tell you a shocking truth about writers. Something so shocking—so shockingly boring—that you may fall from your chair in a fit of tedium. It is the truth we never tell. Readers assume that we live with characters as they do, and sit in the honky-tonks of written scenes immersed in jukebox music and Bud Light conversation; that when love appears, we have known such love; that when death comes, we have known such death. What a miserable life you imagine for us! Nabokov tells of an intimate friend who worried that he should live “among such depressing people.” The shocking truth is that we do not live in honky-tonks, with jukeboxes, with Bud Light love or death. “The only discomfort I really experienced,” Nabokov relates, “was to live in my workshop among discarded limbs and torsos.” We live, that is to say, with words. The love affair (meaning the passions, struggles, betrayals, and reconciliations) I have in writing a novel is not with the “people” who inhabit it; it is with words.

I put “people” in quotation marks because they are, in fact, a mere series of dots provided by the writer that the reader connects into a coherent whole. I’m happy also to put “setting” in quotation marks. When a novel I am reading opens a chapter in a “living room,” my mind immediately ignores the various details embedded to evoke a fictional world and sets the scene at the Coopersteins’ house in Rockville, Maryland. That was my best friend’s house when I was growing up, the first house I remember that was not my own. Thus, Charlotte Haze flirts with Humbert Humbert not in her conventional Ramsdale parlor, with its striped sofa, rickety lamp tables, and Mexican “thingamabobs,” but on the green silk divans Myrna Cooperstein covered so carefully in plastic. Even the grand salons in Proust have, on their gilt tables, the glass grapes and ashtrays of that magic room, and as Raskolnikov murders the poor woman in Russia, behind him sits the Lladró figurine of a slender Jewish boy. Why the Coopersteins’ and not my old home on Stonewood? Perhaps because it was the “other place” of childhood, the site of Hanukkah and additional wonders, the town square where fiction sets up its traveling theater.

I dare say it is true of every reader. Each of you adds your own Coopersteins, your own love affair, your own connection with death. All I do is play with words. And I do mean play! I have beside me a 1906 Roget’s Thesaurus in its original edition, arranged not in alphabetical order but in Aristotelian categories (I have no idea what that means) that baffle and intrigue me. Take a sentence I wrote in my most recent novel, Less Is Lost: “Frozen at the transept, bathed in golden light, our Arthur Less lets out a series of plangent sighs.” Let me freely admit I did not know some of those words before composing. But I knew I had to write something delicious, something so overly formal it would seem ridiculous. Where did I turn? To my trusty Roget’s! I was looking for the silliest words possible. There, in the “church” category, I found “nave” and “transept.” It doesn’t take divine knowledge to know that “transept” is funnier. In the “sadness” category, I found “mournful,” “plaintive,” and “plangent.” At first I chose “plaintive,” but it made it all sound too serious. So I went for “plangent” (again, a word I’d never heard), and suddenly the sentence was great fun. I must have snickered, like someone arranging letters on their Scrabble rack to form farty gay elf. I wasn’t suffering as Arthur suffered. I was having a ball.

A few days ago, I had the somewhat enchanted experience of sitting next to someone on a plane who was reading my novel. It was a five-hour nighttime flight, so we sat in total darkness except for my reading light and the glow of his Kindle. I couldn’t bear to say anything. So I watched him read my book! He would giggle, then highlight a word. I thought he was saving it as some immortal piece of wisdom; of course not. He was looking it up. Maybe it was “transept.” And I giggled a little myself. On our descent, I broke the spell to say, “I don’t want to freak you out, but I’m the author…” What spell? Of watching my own glee at playing with language get passed on to another human being. A human being who, it turns out, is rather like myself. And, reader, that is why I write.•