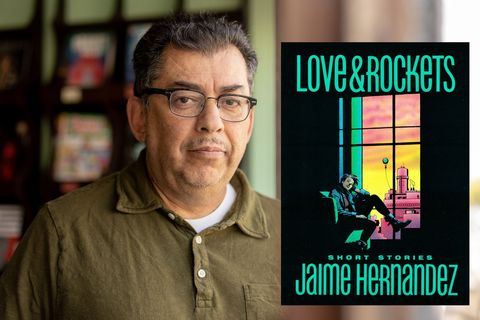 On the book’s cover, a woman happily reclines in an easy chair, while out the window behind her a balloon floats in the pink-orange sky above a cityscape. I picked up that paperback—Love & Rockets: Short Stories, by Jaime Hernandez—not knowing that my life as a comics reader was about to be irrevocably altered.

In my memory, Comics and Comix, where I worked the cash register as a teenager, is as magical a place as Willy Wonka’s factory: graphic novels, posters, RPGs, T-shirts, and, oh yeah, comic books. So many comic books. Mainstream titles alongside black-and-white indies. Superheroes, samurai, The Sandman. Back then, I could’ve happily lived in there.

By this time, the Hernandez brothers’ Love and Rockets had been around for close to 10 years, but even with the magazine-size issues on our shelves, I knew nothing about the series other than what the cover images suggested. Was it…science fiction? Romance? Something in between?

While straightening the racks one afternoon, I found an orphan copy of Short Stories. Sure, why not? I sat at the counter, our stereo tuned to the local new wave station—it was always either that or classic rock, depending on who was on duty—and opened to the story “100 Rooms.”

“This is my friend Maggie” are the first words of Love and Rockets I ever read.

In the tale, she and her pals Hopey, Izzy, and Penny have a staycation inside the empty mansion of billionaire H.R. Costigan. While in search of a bathroom one night, Maggie discovers a handsome squatter named Casey living in one of the bedrooms. She becomes his prisoner, then his lover, until he asks her to run off with him. At the climax, Maggie chooses to stay behind with Hopey instead. The end.

Thirty-one pages unlike any comic I’d seen before. No supervillains, secret identities, or cliff-hangers. If not for the horns on Costigan’s head, this could have been set in the same world I inhabited, filled with ordinary people in (mostly) ordinary situations—though to me, sensitive, pretty Maggie and impulsive, spiky-haired Hopey were anything but ordinary. I was smitten.

Speaking of, let’s bring onstage another gift that landed in my life during that senior year of high school—Savannah.

Leather jacket, piercings, partly shaved head. Musician, writer, tomboy. For the record, if it sounds as if I’m describing one of Maggie’s crew, I fell for Savannah like a guy down an open manhole well before discovering L&R.

I passed her the paperback one day as we departed English class, not because I made a habit of sharing books but because she was the kind of girl you could pass a comic to. “Is it about wrestling?” she asked with a furrowed brow at the image of Maggie’s aunt Vicki applying a leg lock in the ring.

“No,” I said. “Well, sort of?” Argh, what was the right answer? Was her expression a sign of intrigue or repulsion?

Savannah returned the book the next day. “That was rad,” she said with that crooked grin of hers. We debriefed details at one of the wooden carrels in the school library: the steel-toe boots Maggie covets (and Savannah owned); Izzy in her black trench coat like our goth classmates; buxom Penny sunbathing topless, wondering “what the poor people are doing right now.”

After Maggie and Casey sleep together, their dueling thought bubbles sure landed hard.

Casey: “This may be my imagination, but I think this chick really likes me.”

Wishful thinking on his part, mine, or both?

Maggie: “Things are moving too fast here. Do you realize what you’re doing?”

Actually, they weren’t moving fast enough! And, yes, I did realize!

From there, Savannah and I became an unofficial L&R book club. We read out of order, depending on what I could grab—characters and plot threads collided like meteorites, then careered apart. Relationships fizzled out before they began. Jaime Hernandez’s raw, scratchy art from early on mellowed into lush, smooth line work and back again.

“Jerusalem Crickets.” “Young Locas.” Wigwam Bam. Every story I chose for our club was a token of my affection. Had I made the fatal mistake, though, of letting Savannah see me as a reading buddy at the expense of anything more?

As spring gave way to summer and the end of high school arrived at long, long last, Savannah informed me she’d be moving. Far away. The kind of far that includes an ocean.

“I’ll see you in five years,” Casey says to Maggie at the end of “100 Rooms,” after she suggests that as the time at which they might be able to run off together. A single panel of Hopey’s face, half in shadow—steeling herself to perhaps lose her favorite partner in crime—defined melancholy for me. In those pre–cell phone, pre-internet days, saying goodbye often meant saying goodbye.

The last words of mine and Savannah’s story, inside a yearbook cover: “Toys R Us was an adventure.”

The last words of “100 Rooms,” inside a dialogue balloon: “Good morning, Maggie.”

Doesn’t that line sum up the true appeal of comics? A perpetual new morning, an eternal right now. While Hernandez’s characters—unlike their corporate-owned brethren—have aged in real time, readers can always flip back to when all of us were younger, maybe thinner or better-looking, with less wisdom and fewer scars.

We might revisit a game of indoor croquet atop Costigan’s pool table. Or Maggie stranded in the jungle alongside hunky rocket mechanic Rand Race. Or little bald Hopey spray-painting “Super Heroes Suck” on the side of a building. Or two teens excitedly showing each other their favorite comic panels, a rare occurrence (for one of them, at least) of being able to recognize something like a perfect moment even while living inside it.

“This is my friend Maggie.… What a perfect comic book character she makes.”

Join us on Zoom on Thursday, January 19, at 5 p.m. Pacific time, when Hernandez will join CBC host John Freeman and a special guest to discuss Maggie the Mechanic. Please drop by the Alta Clubhouse to let us and your fellow book club members know your thoughts about the book. Register for the event.

Related Stories
Excerpt: 'Maggie the Mechanic'
Why You Should Read This: ‘Maggie the Mechanic’
Why I Write: Why I Draw
Kevin Sharp Kevin Sharp is a fiction writer and journalist who has also written for stage, screen, and video games.
Advertisement - Continue Reading Below
More From California Book Club
Trying to Get Away
A Different Kind of Bildungsroman
Advertisement - Continue Reading Below
Don’t Call Him Gay Ulysses
Excerpt: ‘Less’
California Book Club: Jaime Hernandez Transcript
Event Recap: Jaime Hernandez
Announcing the Special Guest for Jaime Hernandez
Five Books and Movies For After You Finish ‘Maggie
The Shock of the New
Literary Adventures in California: Boxwalla