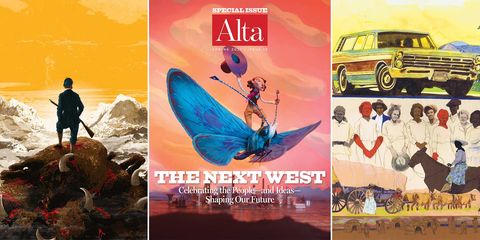 After reviewing thousands of submissions in more than 90 categories, the SPD jury selected Medal Finalists and Merit Winners from among the best works for 2021 published in print.

The following Alta contributing illustrators were recognized as Merit Winners:

Mark Smith won two awards, respectively, for his drawings accompanying the articles “The Search of a Lifetime” and “The Confounding Case of Sir St. George Gore.” The latter is about an Irish aristocrat whose notorious safari through the western United States in the mid-1850s was a cross between a Kardashian glamping vacation and General William Tecumseh Sherman’s Civil War march to the sea.

Chris Sickels, of Red Nose Studio, received recognition for designing the cover and three two-page spreads for Alta’s The Next West issue. Using a type of polymer clay called Sculpey, Sickels created a sequence of unique models held up by armatures constructed from wiring, which he then photographed.

John Mattos earned an award for a series of images he produced for a wildly entertaining story titled “An Occurrence at Sierra Mojada,” which imagines the last moments in the life of the celebrated author and Civil War reporter Ambrose Bierce.

In the Single Illustration category, James Ransome earned an award for a striking image that depicts a Ford station wagon, Black pioneers, and Indigenous people of Southern California in a style that evokes the famed murals of that region. The illustration brings to life an article titled “Biddy Mason and Hannah Embers Were Here,” which reexamines the events that led to Fort Benson becoming a California historical marker.

Thomas Ehretsmann also earned an award in the Single Illustration category, for an oil painting he produced for an interview with the legendary art critic Dave Hickey. The work depicts Hickey standing in a picture frame and clutching a cigarette. Hickey died on November 12, 2021, and the painting is among the last made of him.

While other organizations celebrate the work of illustrators, SPD prides itself on having a specific focus on the visual editorial contributions of print and digital professionals. “All five of these illustrators did an amazing job of enhancing these articles and deserve the recognition,” said Alta’s creative director, John Goecke. “Alta is honored to showcase their work regularly in its pages.”

The Gold Medal and Silver Medal winners will be announced during the 57th Annual SPD Awards Presentation in June. •