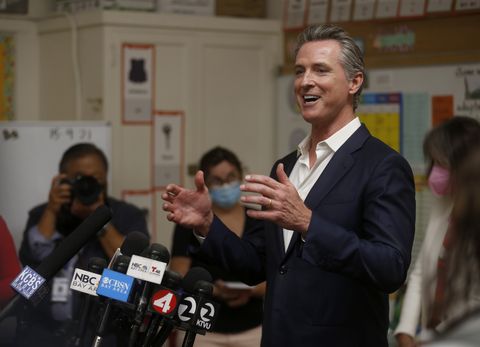 Like all dedicated consumers, Californians appreciate a good return policy. As long as you’ve kept the receipt, you can exchange almost anything—including an elected official—for a model that more comfortably fits your particular views. But beware a policy that demands that even if the return fails—as last week’s Republican-led attempted recall of Governor Gavin Newsom did—there’s still a hefty processing fee.

So, in this case we actually spent money on an attempted return. But maybe we learned something. Possibly?

One thing we learned: This isn’t Bed, Bath, and Democracy. You don’t always get what you want. If you were one of 4,295,574 Californians who voted yes to oust Newsom, you were disappointed. And if you were one of the 7,289,563 voters who thought Newsom more or less fit your whole political design scheme, you were happy indeed.

The status quo is, I’m afraid to say, not cheap. This recall cost the state a lot. You’re going to see headlines declaring that the taxpayer cost for this recall was $276 million. But that was only a July estimate from California’s Department of Finance. The actual cost may be at least $300 million, although it appears to be creeping upward, possibly as high as $400 million.

The state’s $276 million estimation didn’t include the money spent by the campaigns themselves. Sonoma State University’s ​​David McCuan calculatedthat the Newsom campaign called in $90 million in get-out-of-limbo money against the other candidates’ combined $50 million. McCuan told the New York Times to expect figures to rise in future recall attempts: “The spillover effect here is this increases the stakes of all levels of California politics. It raises the bar on the level of resources required to compete.”

If you can stop thinking about $$ all the time, consider the big picture: What did we ultimately get for this attempt to oust the democratically elected governor and replace him with one of a selection of more than 80 candidates? We got…an experience.

That experience varies depending on how you answered the yes/no question.

For some GOP operators and opinionators, the recall results are further proof that California is a “progressive paradise” where liberal sheeple accept the thin cloth mask of oppression. Or the results of a Democrat governor winning in a Democrat-dominated state are somehow a confirmation that voter fraud is real, a cry that started even before the polls closed. Imagine something like a Disneyland dark ride, where we lurch through a series of tableaux depicting an unproven right-wing voter-fraud conspiracy that will probably end with a sudden, exhilarating, and terrifying drop into the darkness of the 2022 midterms.

For progressives, the experience is confirmation that they’re on “the right side of history” and can pat themselves on the back even as the problems of the state (drought, homelessness, policing, COVID safety in schools) pile up. Think of it like a visit to a fun house: sure, they see themselves reflected in all those mirrors, but they’re looking pretty warped.

Since recalls don’t seem to be going anywhere, some state Democrats have ideas about how to improve the process, including raising the barrier to entry for kick-starting a recall, adding a clause for “cause” (like criminal activity), automatically installing the lieutenant governor if the guv gets the boot, and splitting the recall into two votes. These changes might not be any easier, but they would at least ensure that the fate of the world’s fifth-largest economy isn’t (necessarily) put in the hands of a reality-TV star, a billboard model, or a talk-radio host because of a confusing yes/no ballot.

To return to the shop analogy, imagine if you wanted to return a shirt that didn’t work for you and instead got a medium-size Bengal tiger. You’d probably stop shopping there. That’s no way to run a business. Now, as you put the old shirt back in the closet, ask yourself: Is that any way to run a state?•