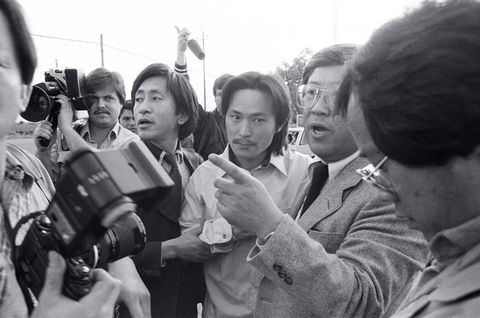 In June 1973, 20-year-old Korean émigré and high school dropout Chol Soo Lee was arrested in San Francisco for the murder of Yip Yee Tak, a known gang leader in Chinatown. Lee admitted he’d done a stupid thing, borrowing a coworker’s gun some days earlier (he was a barker for a North Beach strip club) simply because he’d never handled one before. Proving he had no idea how to do so, Lee accidentally shot a bullet into a wall just outside his rooming house while examining the weapon, but he claimed no knowledge of the killing whatsoever. The SFPD bum-rushed him into a trial that resulted in a life sentence.

Among the many issues bewilderingly left unraised at Lee’s trial was the fact that forensics clearly showed that the bullets he’d fired outside his flat and those fired into Tak’s body could not have been from the same weapon. Nor did Lee (mustachioed, five foot four, 125 pounds) match the clean-shaven, taller, heavier perp described by witnesses to the killing. It was also alleged (sans evidence) that Lee belonged to one of two warring San Francisco Chinese gangs—sidestepping the fact that, as a Korean, he’d never have won their acceptance.

It took a decade and a slow-building groundswell of support (including posters and a folk song called “The Ballad of Chol Soo Lee”) from Asian American activists for Lee to be exonerated, a saga recounted in the documentary Free Chol Soo Lee, screening tonight on opening night of the 40th annual CAAMFest.

Directed by first-timers Eugene Yi and Julie Ha, the documentary received favorable press and an award nomination for its premiere at the Sundance Film Festival in January and was part of the Los Angeles Asian Pacific Film Festival earlier this month.

Free Cho Soo Lee tells the story of how such a gross miscarriage of justice could have occurred. Having moved here from Seoul at age 12, Lee was a perennial outsider. Faced with murder charges, Lee naively assumed his obvious innocence would prevail, despite inept counsel and all-white witnesses who, one commenter said, probably thought “Chinese, Japanese, Korean, they all look alike.”

Many Chinatown residents knew Lee wasn’t guilty—some even knew who the real killer might have been but were too frightened of gang reprisals to come forward. What was clear was that the mayor’s office and police were under considerable pressure to convict somebody, anybody, after 16 recent gang-related Chinatown murders had gone unsolved. Lee provided an easy mark.

Luckily for Lee, he did have allies, like Ranko Yamada and Sacramento-based investigative reporter K.W. Lee. Together, they drummed up enough attention to foster a protest campaign that eventually included such student activists as future S.F. public defender Jeff Adachi and crusading celebrity lawyer Tony Serra. (The latter’s role in this tale would later be dramatized in the 1989 Hollywood feature True Believer, a James Woods–starring fiction not loved by participants in the real-life case.)

Retried at last, Lee was freed in 1983, after nearly 10 years of incarceration—despite his having spent some of that time on death row for killing another inmate, an Aryan Brotherhood member who he claimed intended to kill him.

This engrossing, sometimes exhilarating documentary uses plentiful archival footage (including scenes of the remarkably poised subject interviewed in prison) as well as latter-day recollections to illustrate the successful David versus Goliath battle.

While Free Chol Soo Lee focuses on Asian American communities coming together for a common cause, Lee’s memoir offers a grimmer view of what he was going through at the time.

Posthumously published in 2017, Freedom Without Justice: The Prison Memoirs of Chol Soo Lee provides a bleak, minutely detailed account of Lee’s years in San Quentin and other facilities, where, ironically, the gang violence he’d avoided in San Francisco flourished around him.

Frequently “the only Asian in the tank among a mix of races,” Lee nonetheless had to negotiate being “trapped in warfare twenty-four hours a day” among (and sometimes within) Black, Latino, white, and other ethnically defined prison gangs. Guards and prison administration manipulated—and heightened—conflicts for their own purposes. It was a world in which seemingly petty, even accidental slights might have warranted a fatal “hit,” usually via a handmade contraband knife. Though he tried to stay neutral, by his own account Lee was the target for numerous such attempted assassinations, right up until his release.

Eventually, Lee wrote, he’d “become a changed person from witnessing so much violence.” Reentering civilian life was difficult, despite his moderate fame and myriad supporters. As Lee, who died in 2014, said in one clip in the film, “I became a disappointment and disgrace,” acquiring substance addictions; actual gang affiliations (at last); arrests for, among other things, an act of arson that disfigured him in the early ’90s; and serious health problems before his death, at age 62.

Chastened in his final years, Lee remained enormously grateful to those who’d helped overturn his original, wrongful conviction. If his own life didn’t end happily ever after, Free Chol Soo Lee nonetheless finds inspiration in the community activism that made him a free man.•