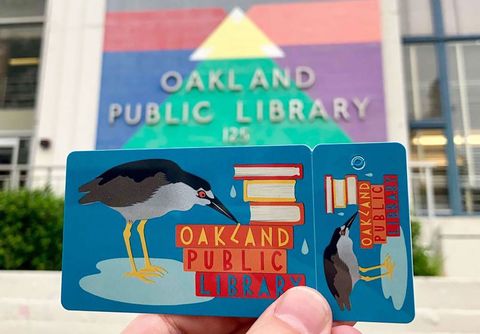 I’m one of those kids who grew up in a library. At each developmental stage, my relationship with the abundance of free materials provided by these institutions shaped me profoundly. From sneaking glances at Mad magazine in kindergarten to obsessively listening to rap cassettes that I couldn’t afford, the items I discovered while wandering through the stacks of my local library influenced my sense of humor, my ambitions, and my self-image. In college, the library was a refuge from my noisy roommates. Before I bought my first laptop, the library’s computers kept me connected with distant friends and family.

Something strange happened when I moved to Oakland about a dozen years ago: I didn’t get a library card. My wife and I had gotten bookshelves for our new apartment, and now that we had a little bit of disposable income, we wanted to build our own library. As our home filled with literary gems unearthed from dusty secondhand shops and tomes gifted to us by guests, I hardly noticed the public library’s absence from my life. Until I got laid off.

As I was jobless and approaching middle age, I did some soul-searching and somehow landed on “local historian” as my new career path. The Bay Area’s tech boom was peaking, and with a flood of money and new residents pouring in, Oakland was rapidly changing. As elders and longtime residents were being displaced in droves, I launched a podcast celebrating the history of Oakland. I wanted to celebrate the stories of fading older generations and also contextualize this place for all the new people moving in so that they wouldn’t just see Oakland as a blank slate to be overhauled according to their upscale desires.

The first step in launching this new project was getting a library card.

The Oakland Public Library includes about 20 branches, but in acquainting myself with this system, I spent the bulk of my time in a modest room on the third floor of the main branch in downtown Oakland. I still remember the overwhelming sense of awe I experienced the first time I entered the History Room. (The name has since been changed to the Oakland History Center.) I came with a short list of research topics, and the librarian quickly gathered a stack of relevant books, file folders full of yellowed newspaper clippings, and various other reference materials in response to my queries. I was enthralled.

That initial excavation sparked an obsession that has fueled East Bay Yesterday for the past six years. My local history “project” now includes a radio show, tours, maps, and stories that are included in curricula ranging from middle school to master’s programs.

After that first day in the History Room, I left the library with a list of research topics about 10 times longer than the one I’d walked in with and also an intuition that Dorothy Lazard, the librarian who had helped me, would soon become a dear friend. Since then, that list of research topics has only continued to grow and so has my friendship with Lazard. Even though she retired last year, we still keep in touch and gather several times per year with other local historians to trade stories, share resources, and (since we usually meet in someone’s backyard instead of a library) enjoy a few bottles of wine.

Over the years, I’ve visited nearly all of Oakland’s libraries and even had the privilege of hosting events at a few, but the place I still spend the most time is the History Room. It’s rarely crowded, but there are often a few patrons huddled at the old wooden tables there. It’s usually a mix of homeowners curious about who lived on their property before them, students working on papers, and journalists digging for un-googleable facts, but when I visited the other day, it was just me and the librarians.

With potentially big changes on the horizon, as Oakland considers renovating or even potentially moving its woefully outdated main branch, I was glad for the opportunity to catch up with Emily Foster, who was archiving vintage photographs when I pulled her aside for a few minutes.

We commiserated over mutual concerns, like the library’s vulnerability to fire, how the lack of climate control necessitates open windows (which results in a constant stream of dust flowing over the collection of irreplaceable historic materials), and similar worries. When I mentioned to Foster that I was working on this article for Alta Journal and asked her if there was anything potential visitors should know, she responded, “If anyone has questions about Oakland, we’re the place to come. People are constantly coming here with seemingly unanswerable questions, but somehow we manage to answer a surprising amount of them.”

That made me think back to my early years, roaming among the tall towers of books, curious about all the knowledge that literally loomed over me. And it made me realize that sometimes libraries can answer questions you didn’t even think to ask.•