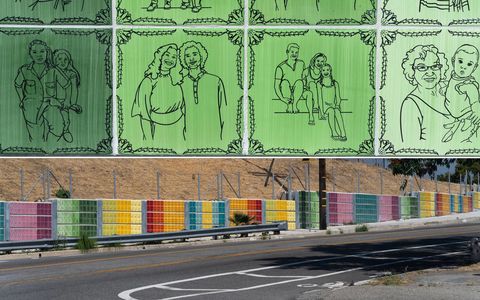 Pedestrian deaths have been on the rise in Los Angeles over the past eight years, despite the fact that several civic agencies have tried to make walking in the city safer. It’s no secret that L.A. is aggressively car-centric, with some areas dangerous for people on foot—including many roads that lack sidewalks. Up until recently, one of those streets without a sidewalk was Alhambra Avenue in El Sereno, where the Eastside transitions into the San Gabriel Valley.

Designed by Echo Park artist Sonia Romero, El Sereno Sarape is located on a hilly stretch of the avenue that’s often crowded with industrial vehicles and cars speeding through the corridor. Romero’s colorful wall is part of a larger project of safety improvements prompted by, among other awful incidents, the death of a young mother by a hit-and-run driver along this road in 2017.

Romero won the commission in 2018 to create the work, which is divided into sections devoted to history, landscape, and community. Romero put out an open call to community members, and each tile honors longtime residents by providing a space for 20 local families to share their stories. The mural’s 42 original tile designs come in varying shades of orange, red, yellow, light green, and pink.

At the June 10 unveiling, several local families joined Romero to celebrate the work. One of the tiles is based on a 50-year-old prom photograph; another shows a local beekeeper; one reads “Otsunga,” in honor of the original Tongva name for the area.

Romero sees public art as an antidote to hostile urban design. She believes a mural imbued with meaningful local stories can provide neighborhood residents with a feeling of safety, both literal and metaphorical. In the past decade, the artist has left her marks all over Los Angeles County with community-driven works installed at subway stations, swimming pools, parks, and a library.

“From a safety perspective,” Romero told me via email, “no one will have to endanger their lives to take in the mural or get a selfie shot because of the design. The colors beautify the stretch of space, and the drawings of the community show the care and lives that go into the neighborhood.”

The artist chose the mural’s theme to pay homage to the local Latinx community. “Serapes, or sarapes, were in my brain because I had been seeing them a lot in social media as a Latinx flex,” she says. “Like in graduation photos when the graduate wears a serape-themed sash. Or casually used as a park blanket or in the back of a car.”

“That’s how I got the inspiration for this piece. In 2018, El Sereno was majority Latinx, and that culture was being threatened by incoming gentrification,” she explains. “We were also in the middle of the Trump presidency, and walls were on everyone’s minds. I thought this was an appropriate wall and moment for a giant serape flex. El Sereno Sarape can be registered fast in a car, a blur of striped color, and pedestrians can enjoy all the detail as they walk along the sidewalk.”

Thanks to the efforts of their neighbors, they can also walk safely.•

Related Stories
Murals Under Siege
Street Fight
Mike Sonksen Mike Sonksen, a third-generation Angeleno, is a poet, an essayist, and the author of Letters to My City.
Advertisement - Continue Reading Below
More From Alta Newsletter
NYC Isn't the New LA
The Desert Is Coming
Advertisement - Continue Reading Below
Will Alexander’s Sonic Grammar
Lego Bike Safety Lessons
All About Calendarios de Varilla
The Year in Tech
Dan Savage’s Adaptation
An End-of-Life Battle
The ‘Believer’ Returns
Making Sense of Morrissey