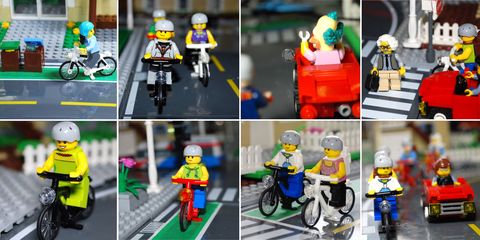 In the spring of 2020, Sonia Elkes was searching for a bike-safety presentation to give to elementary and middle school students in the Bay Area town of San Carlos. “It became apparent that we didn’t have really compelling content to show the kids, and I started to feel more and more stressed,” says Elkes, a behavioral counselor who launched a local bike-advocacy group called San Carlos Bikes in 2017.

What Elkes did have was a giant Lego town that she and her four kids had built at the start of the pandemic. The Lego universe today includes tiny bikes in addition to cars and people (known as minifigures, or minifigs)—and Elkes realized that she could model safe and unsafe biking on her Lego streets. With the help of Rose Mesterhazy, who manages bike education for Palo Alto, Elkes produced “Street Smart: A Student’s Guide to Smart Biking,” a slide deck presentation that can be freely downloaded at the website Bikes & Bricks. Another presentation, focused on pedestrian skills, is aimed at younger children.

Elkes is part of a nationwide grassroots movement that is pushing for bike and pedestrian education in addition to street-safety improvements. As she drafted the Lego presentation, Elkes was acutely aware that 11-year-old Paul Lafargue had recently been killed in a collision while riding his bike in nearby Palo Alto; a decade before, her community had been devastated by the death of 14-year-old Leyla Beban, who was biking to school in neighboring Woodside when she was killed in a crash. And in the spring of last year, 13-year-old Andre Retana died after he fell off his bike and was hit by a vehicle in Mountain View.

Bicycling advocates like Elkes find themselves in a painful conundrum: most streets are designed for cars, yet there are many compelling reasons to get young people on bicycles. Over the past 40 years, obesity in children and adolescents has more than tripled, while the number of children walking and biking to school dropped from 48 percent to 13 percent from 1969 to 2009. Shifting to “active” transportation can also make a major dent in the country’s carbon emissions.

Yet bike and pedestrian safety in the United States is the neglected scullery maid of education. Unlike driver’s ed, which is required by most states to get a license and has national curriculum standards, teaching kids how to navigate streets safely is seen as the responsibility of each family. A handful of states provide funding for their local Safe Routes to School programs, which can include bike and pedestrian education, but there’s no national initiative to make it part of the school curriculum.

Meanwhile, most European countries require traffic-safety education by law beginning in elementary school. By the time they reach middle school, students in Denmark, Germany, and the Netherlands have learned how to walk and bike defensively and anticipate dangerous situations. When they are around 11, Dutch children take the Verkeerexamen (traffic test), a standardized test that has a written component and a real-world test; for the latter, students bike along a local route, and volunteers observe them and score them on their skills. The Verkeerexamen has been around since 1932—presumably ample time to work out the logistical challenges of national bike education.

Critically, the Netherlands also began developing a world-renowned network of dedicated bicycle paths after increasing traffic resulted in a peak of more than 400 child fatalities in 1971 and the 1973 oil crisis made driving very expensive. It’s hard to know if there will be a tipping point for the U.S., but in 2022, the nation projected a 40-year record high in pedestrian deaths, and bicyclist fatalities also went up an estimated 5 percent in 2021.

Beban, Lafargue, and Retana all died under similar circumstances: a truck driver was turning right and didn’t see the bicyclist. Elkes’s Lego presentation covers drivers’ “blind spots” and how to avoid “right hook” collisions, along with other defensive-biking skills. Training in these skills could make the critical difference when streets aren’t explicitly designed to prevent tragic interactions between several-thousand-pound vehicles and bicyclists.

“My kids need to be able to ride [their bikes] for their development—to gain independence and practice responsibility,” says Elkes. “But my sanity depends on knowing that they know the rules of the road and how to navigate those streets safely.”

“One of my favorite slides is the one with the bicyclist looking over her shoulder before moving around a garbage can in the bike lane,” emails Danielle McElwee, who teaches fourth graders in Sonoma County and serves as the lead educator for Sonoma County Safe Routes to School. “I tell the kids, ‘If you’re riding and there is a Lego garbage can in the road, you will need to move further into the road to avoid hitting it. But you have to look behind you to make sure there aren’t any Lego cars driving past you at the same time.’”

McElwee says the kids laugh, but it draws their attention to the safety tip. “I know it sticks with them because in our next class a week or so later, there is a trivia question about this and I’ve noticed the students get this question right more often than previously when we didn’t use that slide.”