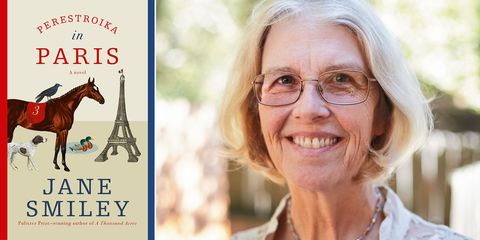 Jane Smiley is a master at her craft, a keen observer of the world, and a thoughtful, inimitable explorer of the psyche. She is both comfortably old-fashioned, placing her complicated characters in plots that can take their time to develop, and quite modern, presenting her readers with lines of sharp, clear prose.

Still, reading her new novel, Perestroika in Paris, amid a surge in the pandemic and the lingering backwash of the 2020 election, I found myself anxious. Here, Smiley tells the story of a horse, Paras, and a dog, Frida, writing from their points of view and in their voices. Other characters include a raven, Raoul, and a rat, Kurt, as well as a pair of mallard ducks named, inexplicably, Sid and Nancy. We also hear from a number of human characters: a gardener, a baker, a grocer, a gendarme, a little boy, and his grandmother.

Paras is a racehorse, and when she is briefly left alone after one contest, she pushes against the door to her stall and opens it. Being “a very curious filly,” she leaves her racetrack, Auteuil, on the edge of Paris, and ends up in the Place du Trocadéro, under the Eiffel Tower. She has taken her trainer’s purse. It contains substantial winnings, which Frida appropriates upon befriending Paras and uses to buy the two of them food.

I turned the pages with trepidation. When would the plague descend? The right-wing militia? The deniers and the white supremacists? I kept waiting for the gendarme to capture Frida and Paras and take them away. Why else were the ducks named for heroin-addicted punk rockers well known for their abusive relationship? I kept thinking about Black Beauty, a book that traumatized me as a child with scenes of beatings, brutal owners, and bits too tight in horses’ mouths.

But Perestroika in Paris is not Black Beauty, and finally I surrendered to it. And why not? The novel is an excellent antidote to our daily madness. It exists in the innocent and sweet Paris of children’s picture books like Madeline and Anatole. The dialogue is in English, but there is something in the cadences, and the use of quaint phrasings like “my dear,” that reminds us of the French. It’s subtle and well-done. The descriptions of the streets, the architecture, and the gardens, as well as the elaborate meals and the freshly baked bread, become components of a love letter to Paris. Everything is safe and clean and polite. When the gendarme hears Paras whinny, he chooses to have a glass of Burgundy rather than investigate, since he has already convinced himself the horse is imaginary. The rats are friendly. Paras’s trainers look for her, but she remains a step ahead. You’d think that a horse roaming free in Paris would not be hard to find, but there is magic in the air here. The park worker uses her manure to fertilize his plants. The baker believes she is having a vision as she feeds Paras oats and special treats. The little boy, meanwhile—a lonely eight-year-old named Etienne—invites the whole menagerie of animal characters to live in his blind great-grandmother’s house and garden.

This sounds absurd, but it is lovely, a fairy tale that in the best tradition of the Brothers Grimm operates on many levels all at once. You could read this book with a child, and he or she would love the animals and the humor and generosity of the narrative. An adult reader might think about the relationship between freedom and friendship, which is a theme Smiley explores. Every character, animal or human, is alone at the beginning of the novel. “Relations in Paris were more chaotic and less friendly,” the raven Raoul admits, “…and, yes, he was lonely.” Frida, too, “was a lonely dog…. How to make a friend, either dog or human, was a mystery to her.”

At the same time, Smiley’s characters are protective of their independence. Frida, for instance, holds back when she first meets Paras, but eventually she gives up her freedom to stick around. Like the others here, she is seeking a balance between freedom with its loneliness and friendship with its responsibilities.

For a moment, Frida thought that, in spite of the money and the purse, the horse wasn’t her concern. She could go back to her little cubbyhole up in the cemetery and pretend that she hadn’t seen Paras and that her life was the same as always. But then she thought that, if her life was the same as always, she didn’t quite know what she was going to do.

Somehow this horse, naïve and lost though she is, brings everyone together. Because of Paras, each character—as well as Smiley’s readers—must accept the importance of community.

It is difficult not to be charmed by Perestroika in Paris. It is un petit quelque chose, a light, delicate pastry that is surprisingly filling. Smiley has said she spent seven years writing this novel. Seven years ago, the world was a happier place, but Perestroika in Paris comes out exactly when we need it most.

Diana Wagman is the author of six novels, including Spontaneous, which won the 2001 PEN Center USA Award for Fiction.

Knopf
Perestroika in Paris by Jane Smiley
Knopf Publishing Group Bookshop.org
$26.95
Buy the Book
This content is created and maintained by a third party, and imported onto this page to help users provide their email addresses. You may be able to find more information about this and similar content at piano.io
Advertisement - Continue Reading Below
More From Online Exclusive Book Reviews
The Structure of the Incidents
Natural History
Advertisement - Continue Reading Below
Uncanny Valley
The Never-Ending Story
Ways of Seeing
Rock ’n’ Roll Fantasy
The History of Violence
Eye of the Beholder
The Things They Carried
Starchitect