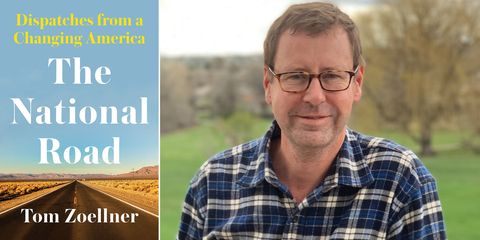 My father used to tell me that if I was driving and felt sleepy, I should pull over and take a nap. When I responded that, as a woman, I had no business sleeping in my car on the side of the road, he advised me to do it anyway. He had learned to drive in Nebraska in the 1960s and thought nothing of spending 12 hours in the car with a thermos of coffee to get to southern Colorado. He had such a pure faith in the power of the road, he believed that it applied to me as well. He wanted me to share the joy of adventure on the American open road.

Something of this ethos marks Tom Zoellner’s new book, The National Road: Dispatches from a Changing America, a collection of essays that aims to answer the following question: “What are the enduring features that make us Americans?” Using the road as metaphor, Zoellner captures not only places, people, and motifs across the continent but also the very quality of movement. He drives from Montana to New England at a time of year when “a bubble of summer low pressure had been pushing north from the Gulf of Mexico, turning the middle Mississippi Valley into a patchwork of rain that night, and the thunderheads glided and shifted like sandbars when the rain stopped.” In an essay on visiting Mormon landmarks at night—which doubles as a primer on that curiously American religion—he offers this glorious observation: “The moon was summer-fat that night and gave the countryside the quality of a gray rainbow.” Zoellner’s love for America as landscape sits at the center of this book.

I have often wondered whether westward expansion might have left a lingering inheritance that underlies the stories we westerners tell ourselves about how we interact with space. “I have never left a highpoint without a pang of regret—a sense of skipping a crucial thought or deed,” Zoellner writes in “The Whole Hoop of the World,” which recounts a series of visits to the tallest mountain in each state. Such immersion, and the way it forces us to confront infinity, is, I’ve found, a kind of common lens through which western-born Americans consider nature.

But then Zoellner’s wonder falters. In the moving “Late City Final,” one of my favorite essays, Zoellner describes with an almost patriotic zeal his time working at local papers. “I wanted to pour a trickle of words onto the flimsy pages of newsprint and help cover America,” he recalls. “It seemed like the best job ever created.”

We know what happens next. The microscopic road—the internet—springs up, dispersing thousands of stories with an even greater efficiency than that of a dandelion assaulting a suburban lawn. Zoellner wonders whether historians will note that the papers began to close just as America “expanded the most rights ... it ever had before to its minority citizens and began to surrender the exclusively white male grip on the levers of power…toward a general expectation of public honesty and probity.” As the newspapers begin to shut down, so, too, do Main Streets and mom-and-pop stores. And so, what now?

Later, the road descends into the San Fernando Valley for a glimpse at the pornography trade. “For all of its deceit and counterfeiting,” Zoellner tells us, “a kernel of honesty glows at the heart of pornography. We seek to conceal our ordinary daytime lusts with clothing and propriety and shelter, but this burning river of mystery flows inside all of us.” Oh? The road glides past Nevada brothels and abandoned gold camps: “capitalism stripped away of all its pretensions and niceties, in the same way that a desert is honest and clean with all its verdure burned off to reveal the skeleton of land itself. The end of a gold camp resembles a corpse after an autopsy.”

Zoellner isn’t the only one who looks at America right now and sees its most honest self reflected in parched earth; it’s a popular sentiment, and I can’t fault him for it. But part of me feels that I don’t need another reminder of the distance we have traveled between the dream of America that we—or at least some of us—have shared and the reality in which we find ourselves. Why are immigrants still entering this country, why are parents still fighting and people of color striving, if the bare truth is that the American dream has become the equivalent of a tawdry corpse? Reading the later essays, I often thought about Leslie Jamison, who once asked whether there was not an aesthetic alternative to “sadness as a default narrative posture.”

I think my dad had it right—the road is magic. But he also had it wrong: It was never the case that everyone could pull over and safely go to sleep.

I think of Emily St. John Mandel’s novel Station Eleven, in which a pandemic leaves transportation lines disrupted and often deadly to the few who attempt to travel. By the end of the book, however, the road beckons once again. “Perhaps vessels are setting out even now,” Mandel writes, “traveling toward or away…steered by sailors armed with maps and knowledge of the stars, driven by need or perhaps simply by curiosity.” What she’s saying is that the road remains to carry us not only to the past but also to the future, to destinations we must discover and, in many cases, fight to build.

Marie Mutsuki Mockett is the author, most recently, of American Harvest: God, Country, and Farming in the Heartland.

Counterpoint
The National Road: Dispatches from a Changing America by Tom Zoellner
Bookshop.org
$26.00
Buy the Book
This content is created and maintained by a third party, and imported onto this page to help users provide their email addresses. You may be able to find more information about this and similar content at piano.io
Advertisement - Continue Reading Below
More From Nonfiction
Hard Rain
Natural History
Advertisement - Continue Reading Below
The Never-Ending Story
Rock ’n’ Roll Fantasy
Personal History: ﻿Lars Jan
She Explored the Undercurrents of Life
Joan Didion: 1934–2021
Personal History: Janelle Brown
Planting a Tree Is Not a Way of Life
Personal History: Bret Easton Ellis