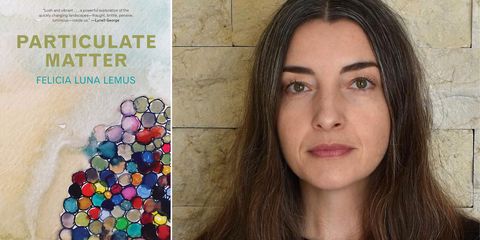 To call the themes in Felicia Luna Lemus’s spare, poetic memoir, Particulate Matter, timely would be an almost comic understatement. Yet the story she tells—involving fire, illness, isolation, and the ravages of climate change—is not about the endless disaster that is 2020. Instead, it unfolds several years earlier, as wildfires rage and ash falls in Los Angeles and Lemus’s wife, the novelist Nina Revoyr, fights for breath in a retreat remote from the city she has been forced to flee.

The saga begins with Revoyr’s complaint “It feels like my lungs are sunburned,” after which the couple rushes to a hospital. Lemus, no stranger to loss, offers several fragmentary depictions of tragedy, including her grandfather’s death by lightning. “It was naive of me to think the skies could be neutral,” she writes. Upon finding a fallen hummingbird nest, she notes, “I should put it back where I found it. But it’s mine now.” What she is addressing is her own loneliness during her forced separation from her wife.

Such allusions are the way Particulate Matter conveys information: delicately, elliptically. It’s mainly through inference, for example, that we learn that Revoyr does not come home from the hospital but moves to a “little house, home-not-home” in a coastal community, where the air is cleaner, leaving Lemus to spread herself between that place and the couple’s home in the city, where, she notes, “I toss and turn, but I do not take your side of the bed.”

This “your”—addressed to Revoyr—fits the tendency to eschew explanation: once we relax into the direct address (even the dedication reads simply “Nina”), we absorb Lemus’s meditations on grief, fear, loss, and a changing, dangerous earth. It is as if we are eavesdroppers to one side of an intimate coded conversation between the author and her wife.

It is a conversation about many things. Lemus carries several obsessions throughout the book—which is short enough to be an essay, since many pages contain no more than a sentence or two. These fixations include resistance to the city, with its noise and its impatience, the honking in tunnels, the fireworks that sound “like war.”

Yet there is nowhere to hide: Revoyr’s new place turns out to be toxic also, and when she tries to camp in the yard, a rat falls from a tree onto her tent. Nothing is safe. There’s a bomb scare at Revoyr’s office; a shooting occurs at the freeway exit Lemus takes to visit her.

Meanwhile, in their new community—“(temporary),” Lemus assures herself and Revoyr in repeated parentheses—the biracial couple become visible in a way they are not in Los Angeles. Lemus is made to prove she isn’t stealing at a swanky home goods store, and the Starbucks barista finds Felicia an impossible name to spell. The in-your-face chaos of the city is juxtaposed with the quiet neighborhood where surfaces are full of beauty but danger lies underneath.

Ultimately, Lemus is preoccupied with transformation—in a marriage, in a body, in a country, in the land. She compares a cautious coyote pup with “one older, railish, rough patches of fur. No fear in his stride.” She suggests that a brown widow bite will give her “superpowers” and confides that the movies she and Revoyr have happily watched will make her weep should her wife die. This sense of imminent mortality is contrasted with the trees and cacti that have “survived world wars.”

Lemus changes as her ordeal wears on: she smells fire repeatedly even after the flames have been put out, calling in the dog and shutting her windows against what may be PTSD. She loves Revoyr’s sincerity, but her own voice veers to jaded; one page bears the single sentence “Seriously, what the fuck?”

Particulate Matter is emotionally gripping, despite Lemus’s elusive approach to narrative. The memoir never reveals the specifics of Revoyr’s condition, nor discusses in much detail why Lemus must continue to live in Los Angeles. (Such revelations, of course, would be redundant, since Lemus’s reader is, first and foremost, her wife.)

In that sense, Particulate Matter joins the ranks of similarly elliptical-yet-intimate grief narratives like Karen Green’s Bough Down, written in response to the suicide of her husband, David Foster Wallace. What distinguishes Lemus’s book, however, is something she could not have known while writing, and that is how the nightmare lived by one California couple became, in the summer of 2020, the nightmare lived by much of the West Coast. This makes Particulate Matter not just a memoir but also an oracle, foreseeing the present as we repeat, en masse, a similar ordeal, separated from loved ones and watching the sky rain apocalyptic ash, telling ourselves, as Lemus does, “I almost believe this…will end someday.”