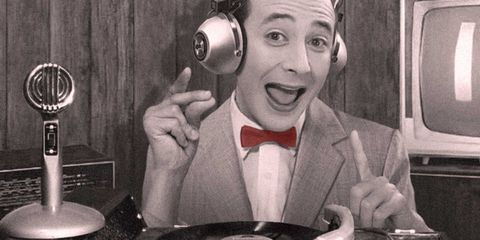 The public-radio airwaves have long been wanting for whimsy, but over Thanksgiving weekend, Los Angeles’s listener-supported KCRW broadcast a fun house–size dose of it. The Pee-wee Herman Radio Hour took over the L.A. airwaves with a familiar giggle and a blast of classic soul. Pee-wee’s radio debut came four decades after Paul Reubens’s beloved character first graced the stage in L.A., eventually becoming a movie and television icon.

It all started as a bit of a Twitter stunt. On November 10, the official Pee-wee Herman account tweeted a typed letter to KCRW’s Santa Monica office requesting a DJ slot. A clever social media campaign and some back-and-forth between the station account led to the launch of a one-off radio special. (Not to burst anyone’s bubble, but Reubens announced the completed radio pilot in May on Pleasant Gehman’s The Devil’s Music podcast.)

In addition to Pee-wee Herman the disc jockey, actors Josh Meyers, Alison Mork, and Lynne Marie Stewart reprised their roles as Conky, Chairry, and Miss Yvonne, respectively. The gang packed a lot of jokes and music into the hour, including appearances by Jack White and Charo.

There’s always been some slippage between the public Pee-wee persona and the very private Reubens. Even in the guise of his antic boy-man character, Reubens dropped some music-nerd factoids that reminded me of Canada’s music trivia–minded multimedia performer Nardwuar: The Human Serviette.

Avoiding Dr. Demento–style novelty tunes, Pee-wee leaned on classic ’60s and ’70s soul and funk. Surprisingly absent were any nods to the late-’70s Hollywood punk scene where Reubens had been present. Kids watching Pee-wee’s Playhouse over a bowl of cereal during its 1986–1990 run may not have known that Reubens had deep early L.A. punk and new wave connections, including Exene Cervenka, the Go-Go’s, and underground artist Gary Panter, who designed sets for both the original show and the Playhouse TV series.

Given Pee-wee’s ascendance from liminal spaces like punk clubs, podcasting feels like a logical progression of his oeuvre. Maximum Fun podcast networkfounder and Bullseye host Jesse Thorn produced the Radio Hour and announced that the archived show would remain for only a one-week window. A hybrid format, the show countered the time-shifted nature of podcasts with the finitude of an artificial deadline. Throughout the show, only partial segments of songs could be heard, cut off by a record-scratch sound effect that nearly became a character in itself. (A theory: the song publishing licenses might have prohibited a full-play Pee-wee music podcast.)

One way to look at Radio Hour is as a parody of terrestrial radio in 2021—a format in precipitous decline—with Pee-wee doing the weather, hosting call-in contests, and executing a paella recipe. The Pee-wee Herman project has always been both a deconstruction and an homage to the media that shaped Reubens, from 1950s puppet shows to school film strips to PBS programming.

There may be another, more pragmatic reason for the 69-year-old Reubens’s pivot to audio. In 2016, he acknowledged the very expensive CGI de-aging effects for Pee Wee’s Big Holiday. The youthfulness of Pee-wee plays well as a disembodied voice, and Reubens seems to be in a contemplative space regarding his legacy.

My own experience of that legacy began in the summer of 1985, seeing the trailer for Pee-wee’s Big Adventure and losing my mind. I had no idea who this man-child was, I’d never seen his appearance in Cheech and Chong’s Next Movie or even heard of his HBO movie, and I may have mistaken him for Martin Short’s Ed Grimley character.

The trailer was all it took for me to laugh maniacally and attempt the tiptoe Tequila dance, to the chagrin of my stolid immigrant father. Finally seeing Big Adventure on a big screen cracked open my imagination, with the live-action cartoon visuals of Tim Burton, Danny Elfman’s antic score, and the truly terrifying Large Marge augmenting Reubens’s creation. There were other characters from the ’80s whom a comedy nerd might gravitate to, and I’d definitely ended up imitating Bobcat Goldthwait and Max Headroom, but Pee-wee Herman became my Peter Pan role model for evading adulthood.

The very notion of Pee-wee inverted the narrow idea of alpha masculinity, which had few alternatives in the Reagan-era suburbs of California. Revisiting old Pee-wee TV appearances, I found that most of the bits have aged well as pure goofiness, save an appearance on a Carl Reiner show with some very unfortunate slant-eyed glasses. I was not the target age for Pee-wee’s Playhouse, but its abundance of puppets and colorful set design primed me for the world of cardboard-cutout fortresses and costumed characters of the noise-music scene I found myself in decades down the road.

Some fans on Twitter are already clamoring for a weekly Pee-wee Herman Radio Hour, but the extensive sound design and comedy writing would necessitate a slow production turnaround. This may just be a one-off, but the final minutes teased a future episode. Reubens can hardly be accused of slacking during the pandemic; he has been collaborating with the Safdie brothers on a two-part docuseries about Pee-wee for HBO and is writing a memoir. As seems fitting for someone whose trademark role originated in the ’70s, Reubens loves bits that drag out far longer than anyone else wants or expects—here’s hoping the Radio Hour is one of them.