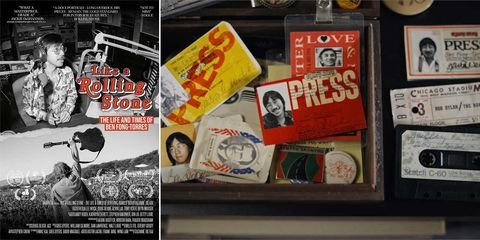 When Suzanne Joe Kai’s Like a Rolling Stone: The Life and Times of Ben Fong-Torres screened at film festivals earlier this season, press coverage was celebratory, affectionate, even reverential—and understandably so.

Kai’s documentary, which will be showing in Los Angeles for a limited run at the Laemmle Monica Film Center starting November 26, hits all the right notes for all the right reasons, tracing Fong-Torres’s path from a postwar East Bay childhood to journalist, broadcaster, one of Rolling Stone’s first editor/tastemakers, prolific author, and cultural advocate.

At a time when Asian American experiences are receiving a greater share of the mainstream spotlight, Fong-Torres’s journey covers a few intersectional, zeitgeist-y bases: the middle child of hardworking Chinese immigrants; a minority kid who navigated (and excelled at) assimilation via Top 40 hits while simultaneously busing tables in the family’s Chinatown restaurant; a tenacious young reporter who quietly stared down racial bias from his pale ’n’ male peers; and a rock superfan who parlayed his love of music and writing into a decades-long career.

Long before the modern-day version of smart, ambitious San Franciscans preached the gospel of “hustle and grind,” Fong-Torres ditched traditional Chinese expectations and quit his safe, steady job with a phone company. Joining the fledgling editorial team in Rolling Stone’s original Brannan Street loft in 1968, Fong-Torres was at the epicenter of that generation-defining magazine back when cofounder Jann Wenner was still buying desks from Goodwill and long-distance office phone calls were tracked with egg timers.

As Kai deftly shows us in a trove of concert clips, archival footage, charming B-roll moments, and glimpses of backstage camaraderie, Fong-Torres found himself calmly at the center of it all—asking serious questions, taking detailed notes, and writing long-form features about the biggest names in American entertainment as RS grew from countercultural rag to a publication of national influence.

Arguably some of the best and most telling moments in the film are the examples of Fong-Torres’s uncanny, almost Forrest Gump–like timing and presence as the face and byline of Rolling Stone. There he is, in the green room with Paul McCartney, both wearing goofy printed shirts. And there he is, backstage with Al Green, or cracking up at something Brian Wilson just told him. There he is again, ordering potato chips from room service with Jim Morrison, or having tea with Stevie Wonder. He scored an interview with Marvin Gaye right after the release of What’s Going On, and his deeply revealing piece on Ray Charles—at a time when the artist was largely overlooked by younger listeners—won the ASCAP Deems Taylor Award. Members of both Jefferson Airplane and the Grateful Dead made it clear that they would not speak to anyone else from the magazine other than Fong-Torres. And while on assignment with the actual Rolling Stones, he encountered a very young Cameron Crowe, who later immortalized Fong-Torres as a pivotal character in 2000’s Almost Famous, Crowe’s mythic biopic of his teenage years.

“That was the culture at the time. That you had access,” Fong-Torres explains in the documentary. “You were not one of a hundred people asking for an interview. You were one of one.”

It’s precisely this accessibility—the tour-bus-and-hotel-room proximity to his famous subjects in those early days—that fueled his celebrity profiles.

In an interview early last month with the San Francisco Chronicle, Fong-Torres said, “When I met these [rock stars], we were suddenly bound by the fact that we were different. They were performers, artists or a traveling band. So with me walking in, and the fact that I’m Asian, just adds to that otherness. I felt like there was definitely a bond due to my being what I am.”

While that may be true, it could also be argued that Fong-Torres’s unique childhood experiences also contributed to his appeal with wary interview subjects and band publicists. Besides his love of R&B and Top 40 radio, the consistent through line of Fong-Torres’s upbringing was working long restaurant hours after school, both in Oakland and for a brief stretch in Amarillo, Texas, before quickly returning to the much more ethnically diverse Bay Area. (“It was in Texas that I could see discrimination firsthand,” he states simply in the documentary, describing his time as the only Asian student in an all-white Texas school in 1957. “I will never forget the gym teacher calling me ‘Chop-Chop.’ It was very humiliating. In speech class, I learned to mimic Texas accents, to camouflage my Chinatown upbringing.”)

Any writer who’s ever worked a service or hospitality job knows that the occupational skill set one retains from dealing with customers and busting ass in kitchens is precisely the same skill set that contributes to insightful reporting and effective interviewing. Active listening, fly-on-the-wall blendability, constant multitasking, and knowing how to correctly read the room? All in a day’s work if you’re waiting tables. Anticipating everyone else’s needs and being able to focus amid chaos? Check and check. Light-years before the terms emotional labor and soft skills entered corporate vernacular and LinkedIn posts from thought leaders, Fong-Torres was unwittingly honing his interviewing chops and work ethic in the family restaurant, ironically, the very place many Chinese immigrant children aspire to escape.

For a first-generation Chinese American who was also raised in Northern California during a time when grammar school teachers visibly struggled to pronounce my name, Fong-Torres’s pioneering refusal to follow the Chinese Parent Plan resonates deeply with me, especially when he quips that his parents would have much preferred Dr. Fong-Torres or Ben Fong-Torres, Esq.

It’s a familiar tension for those of us who witnessed the backbreaking work of our immigrant parents, only to then fully assimilate as young adults and choose the very American path of “doing what you love” for a living—even if that means following rock bands on tour. Like Fong-Torres, I also ditched the dutiful Chinese child road map and became a writer and an editor at an arts and culture alt-weekly back when one could actually make a nice living at a local newspaper. (Also back when I was often the only minority in the office and was mistaken for the staff accountant on several occasions, but that’s another story.)

Publishing and reporting in general have changed seismically since the days of circulation audits and luxurious word counts. And while Kai’s storytelling no doubt puts Fong-Torres front and center, she inadvertently pays homage to the era of writing for a living in the 1970s, when music journalism in particular was an intimate, lo-fi experience filled with hours of cassette tapes waiting to be manually transcribed. (Fong-Torres’s personal archive, by the way, belongs in the Rock & Roll Hall of Fame, his casually labeled tapes with names like George Harrison, Ray Charles, Tina Turner, James Brown, Jerry Garcia, Jim Morrison…the list goes on and should be digitized for posterity, or at least a podcast series.)

At 76, Fong-Torres is still a part of San Francisco’s cultural landscape. His legacy is clear, and one that deserves more acknowledgment in contemporary media. But while Like a Rolling Stone may initially feel like a tribute to Fong-Torres and his path from Chinatown to rock history, it also provides a loving reminder of what a writer’s life was like before “turning in copy” became “creating content.” More than a tribute to one writer or magazine, the film is a love letter to living an analog life, complete with crates of vinyl and paper ticket stubs.

Those things—crammed into Fong-Torres’s basement or lovingly shown off in the opening credits of Crowe’s Almost Famous—are more than ephemera destined for eBay: they’re the source material of art and reminders of that sweet and hazy time before experiences became fodder for Instagram, Twitter, TikTok, or (soon) the Metaverse. It’s telling that Fong-Torres has little to no presence on those platforms: he doesn’t need them. As Like a Rolling Stoneshows, his life was, and continues to be, full of life.•