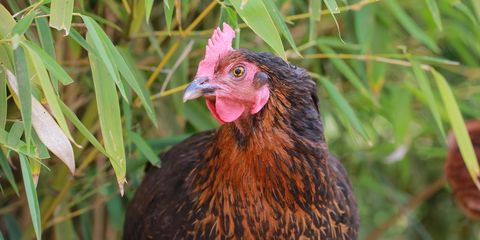 Which came first: the chicken or the really strong opinions about keeping them as pets? Last week’s Alta Journal newsletter (subscribe here) looked at the pandemic-era popularity of raising backyard chickens. The article, in which one expert derided the trendy hobby as a “disaster,” ruffled some feathers. Here are a handful of Alta reader responses, lightly edited.

Some years ago when I lived in a house in the woods near La Honda we raised chickens—Rhode Island Reds and leghorns. We got a lot of eggs out of them and there was no problem with rooster noises, as the nearest neighbors were far away and we were under the influence of the idea that hens liked a rooster around and fertilized eggs were lower in cholesterol.

We lived on the verge of a redwood forest giving onto an upland bay-madrone-oak forest of a considerable extent. Lots of coastal deer, coyotes, raccoons—even mountain lions, which we sometimes saw at a duck pond in the hills. Plenty of predators, in other words. We ourselves were predators. We sometimes killed the extra rooster or hen going off its productive years as an egg-layer and ate it—not bad, despite what you hear about tough old birds.

We had a jerry-rigged but pretty darn solid chicken coop, with a large fenced-in free-range area. No nonsense about letting them roam at will; our dog was not a model of restraint, and as I said, we were living in a forest. We knew the beasts were out there. We were happy that they were out there, in fact.

Inevitably, I guess—although we never saw it coming, after years of happy chicken farming—I went out one morning to feed the birds and found a scene out of The Texas Chainsaw Massacre. All were dead, all except for one Ishmael figure spared to tell the tale, a young leghorn hen who I found cowering under a board. Despite what it says in your essay about chickens having “large personalities,” I never saw much in the eyes of a chicken beyond intense instinctive chicken life, but this hen exhibited a version of the thousand-yard stare said to be common among soldiers after sessions of especially brutal combat. We tried to comfort her by holding her, but that didn’t seem to make a difference. I can’t remember what we did with her—I’m sure we didn’t eat her, though.

No, that was the end of poultry for us. Only a couple of chickens had been eaten; the rest had been killed on a spree, a few by disemboweling. A friend who knew about these things said it looked like raccoons. They’re said to go in for disemboweling.

I’m glad to have been a back-to-the-land type in an era that was not quite so much about cultivating exquisite sensitivities, for example, about the fate of excess roosters. My era was actually about devolving, not evolving, in the direction of getting some dirt on your hands, some blood (but not too much), as a counter to what we saw as the air-conditioned, plasticized, deodorized unreality that was taking over modern life.

Thank you, Alta, for the very good spotlight.

People, people, do your research.... As a former chicken/avian keeper in my youth, I can attest to the great responsibility involved in caring for fowl, chickens, quail, pheasant, and a variety of exotic birds—they are so unique and fascinating.

I rescued/took over as caregiver to many of them and was privileged to give them a good life and study the wonder of birds.

Care of these creatures is time-consuming and requires a great deal of commitment to their li’l lives. As in all things, respect all life.

Breakfast for the Neighborhood

On the Basis of Sex

Hello. I read your article with great interest this morning.

I do know that many people have become disenchanted with the whole idea of chickens, which is sad. Across my social media and through my several books, I try to educate people, offer tips to make things easier or more economical, and just basically try to get people to do their research before taking the plunge.

One thing in the article is incorrect. It actually isn’t hard to sex a baby chick if you know what you’re doing. The hatcheries have a 90 percent success rate. I think the problem with unwanted roosters came more because people think you need a rooster for a hen to lay an egg. And that’s wrong. The eggs just won’t be fertile and will never hatch into chicks.

I have also seen an uptick in people hatching their own chickens, not realizing that your odds are pretty good that half will end up being roosters.

So I think those are the two reasons why roosters are being surrendered to shelters and rescues or just being dumped.

As for the rest, chickens are actually pretty low-maintenance and easy to keep once you get your routine down. I just wish more people had done a bit of research or read a few books before diving in.

My family has a sanctuary for chickens in Canada. We see a lot of the same problems referenced in the article. However, the last sentence in the fifth paragraph is absolute bullsh*t that will only end up hurting animals. I say this without malice, but with the hope that we recognize the error and amend it.

It is a damn shame people do not understand them. They are missing out on so much joy and love. I truly feel for people who don’t know how wonderful they are.

People who love their hens don’t feel those connections just because of the cruel selective breeding for excessive egg production. They have complex personalities, no different from any other traditional companion animal.

A rooster’s mission in life is to look out for his flock. Our house rooster, Steve—yes, he lives in the house and wears an assortment of knickers to avoid accidents—is basically a puppy with feathers. We are part of his flock. He always wants to be by your side, and he loves to snuggle up with us in the evenings. He really loves playing in blanket forts on the couch.

To say roosters are less fun to “own” than hens is wrong. We have six boys, each of whom could not be more treasured.

Roosters are also less prone to developing the painful and often fatal reproductive diseases faced by layer hens. Hens are the most expensive animals to take care of, if you are actually providing them veterinary care. Their bodies are so messed up from excessive egg production. Watching them get sick from reproductive diseases (i.e., ovarian cancer) and not being able to do anything to save them is the worst kind of heartbreak. It is most certainly not fun. Most people just ignore the signs they are sick and let them die suffering.

Hopefully you’ll see the importance in making such an amendment to help bust these deadly myths.