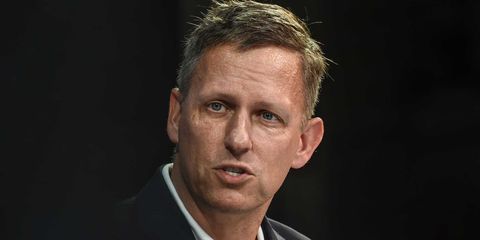 Unless you’re a close reader of the tech press, you may not know the name Peter Thiel. Chances are, though, you’ve used many of the products created by the companies he cofounded and funded over the past two decades, making him very, very rich.

Ever shop online using PayPal? Thiel cofounded it. Like to keep up with friends, family, and the news via Facebook? Thiel was an early investor in the social network when Mark Zuckerberg was just another cocky college dropout. (Thiel still sits on the Facebook board of directors.) Use Airbnb, Spotify, or Lyft? Thiel’s Founders Fund venture capital firm funded those companies and dozens more.

This essay was adapted from the Alta newsletter, delivered to your inbox every Thursday.
SIGN UP

He’s also extraordinarily controversial as a key figure in the election of Donald Trump, delivering a speech at the Republican National Convention in 2016. Trump called Thiel “a very special guy” and reportedly told him, “We’re friends for life.”

Thiel’s ability to hold a grudge is also pretty extraordinary, as documented in Max Chafkin’s The Contrarian: Peter Thiel and Silicon Valley’s Pursuit of Power (Penguin, September 21). The billionaire waged a decade-long campaign against Gawker Media after the New York–based blog company outed him in 2007. Thiel secretly funded multiple lawsuits against the company until one fronted by Terry Bollea (better known as Hulk Hogan) delivered a death blow in 2016. Thiel called the $10 million stealth campaign “one of my greater philanthropic things that I’ve done.”

“The story of Thiel’s rise in tech is the California story in a bunch of different ways,” says Chafkin, a features editor and reporter for Bloomberg Businessweek.

Thiel’s story may sound like that of other tech titans, with his Dungeons & Dragons–playing childhood in Foster City (a suburb south of San Francisco) and his Stanford degrees. But Thiel’s story is also strange, mostly because in Chafkin’s telling, Thiel himself comes off as very strange. (An example: in 2008, Thiel wrote a letter to investors in a hedge fund he was running in which he described an “impending catastrophe…famine, disease, war, and death.” The letter’s headline? “The Optimistic Thought Experiment.”)

To Chafkin, Thiel’s darker views are less a rebuke of the popular image of tech founders as quasi-hippie utopians than a revelation of the conservative strain that courses through Silicon Valley. Stanford in the 1990s, Chafkin says, “was this hotbed for the new right.”

Even though Thiel built his fortune in California, he seems to be doing everything in his power to distance himself from the place. He funded a think tank dedicated to the creation of offshore autonomous enclaves (a.k.a. Seasteading). As Chafkin shows, he essentially purchased New Zealand citizenship, while also acquiring a house made of 18 tons of granite known as the Plasma House in Queenstown. (He’s currently trying to offload it: asking price, $6 million.)

Thiel’s Founders Fund has also invested in a company that seeks to get people as far away from California (and Earth) as possible: SpaceX, founded by his onetime colleague and longtime foil Elon Musk. If Musk somehow succeeds in building a colony on Mars, Thiel’s machinations—good and bad—could recede as his “pursuit of power” goes interplanetary.

It would also make Earth, like California, New Zealand, the Trump administration, and the ashes of Gawker, just another stepping stone for Peter Thiel’s relentless, extraordinary rise.•