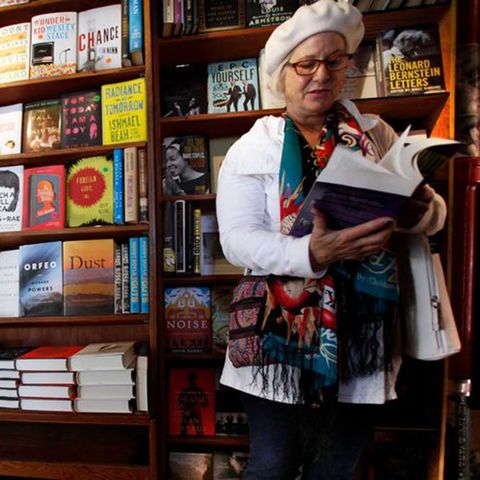 With each passing day book lovers find themselves increasingly unable to resist the siren call of one-day shipping, making Amazon, already among the most profitable companies in the world, bigger and stronger. Publishers and proprietors of bookstores, the spaces once cherished as literary community hubs, are being asked to play by Amazon’s rules or forfeit the book game entirely.

Earlier this month, some of bookselling’s best minds and most enthusiastic supporters gathered for Reimagining Bookstores, a virtual conference launched by Kepler’s Books in Menlo Park. The goal: to come up with practical solutions to ensure a future for their businesses and the communities that rely upon them. Twenty-three other bookstores from twelve different states, including six California locations, jumped in to co-host the gathering, which drew a diverse crowd of booksellers, publishers, buyers, authors, and readers from across the country. These were ardent book lovers sharing their hopes for the future. It was a smashing success.

Taking part over two days, Reimagining Bookstores featured a multitude of Zoom rooms where people shared ideas about strengthening the sorts of spaces many of us have found refuge in over the course of our lives. My own first internship was at City Lights Publishers, located in the upstairs offices of the City Lights bookstore in San Francisco. Seeing fellow readers peruse the towering shelves or discover the stairway to the maze of books downstairs made the sticky BART ride across the Bay worth every screeching minute. Attending Reimagining Bookstores was an opportunity to meet and talk with others who knew the feeling of seeing a lone customer pause in front of a book that might completely change their life.

On day one of the conference we assembled in a giant Zoom room, with attendance capping out at around 250 people. Praveen Madan, Kepler’s energetic CEO kicked off the event. “I’m absolutely convinced that we can create a strong and exciting future for bookstores everywhere, but we are gonna need a lot of help,” he told the virtual crowd.

With his background in technology, Madan is an unusual avatar for bookstores, but perhaps the right person to rethink the business of selling books. After an early career as a consultant, he and his wife, Christin Evans, revitalized San Francisco’s Booksmith. In 2011, he became CEO of Kepler’s, a Menlo Park institution founded in 1955 that he restructured as a hybrid of for- and nonprofit.

Reimagining Bookstores was designed with the concept of Open Space, a set of organizing principles that focus on fostering organic discussion. Attendees were divided into three cohorts, and each of these groups created their own conversations posting topics to agenda walls which were opened up into participant-led breakout rooms.

For a virtual event, it felt surprisingly organic.

There were conversations about how to bring more teens into bookstores, which inevitably turned to TikTok talk, and conversations around ambassadors and role models. Other rooms took stabs at the issues like horrific rents, living wages, the role of smaller bookstores in offering social services that libraries are currently overwhelmed by, and the ever-looming confusion of why the wealthy aren’t opening their pockets to help finance bookstores. A room discussing turning bookstores into non-profits drew many interested attendees, one of whom shared, “People say, ‘Why don’t you just write a grant?’ It’s a lot of work, I don’t have the time!” In another conversation aimed at providing mentorship opportunities for younger employees, one bookstore manager mused, “How can I help staff more? The problem is now I’m the boss... I can’t be like, ‘let’s go out to the bar y’all!’ Apparently that’s not as cool nowadays.”

Day two began with Madan offering three discussion points that were personally important to him. He called attention to the fact that bookstores are good for our communities and that they must ask for help to continue to serve and become more essential, especially post-Covid. That might mean adopting new models like nonprofits, hybrids and cooperatives. He was also emphatic that a living wage for bookstore staff must be achieved to combat “institutionalized poverty.” Finally, he acknowledged plainly that booksellers need to save themselves, this event being one way to start that effort.

With Madan’s points in mind, and “generosity” as his rallying call, discussions included a debate about forming unions for bookselling staff vs. asking customers to “tip” a bookseller who helped them or adding surcharges to their total purchases to support bookstore employees, differentiating pain points for booksellers vs. those of customers, and a potential Stewardship Council.

As someone who grew up attending storytimes at my local bookstore, and who later sought a quiet spot in the YA section where I could sit on the floor with a stack of books, I would hate to see these cozy spaces transform beyond recognition in an effort to adapt to a technology-obsessed culture. However, I do see the need for a reorganization of how the book business works. Talk of creating worker co-ops was particularly compelling to me as a way to ensure staff are being paid fairly while potentially saving these stores. (In fact, there are already a number of bookstore co-ops out there, including Oakland’s Moments Cooperative and Community Space, which opened in 2020.)

While one would expect an indie bookstore revival event to be full of hissing at Amazon and frantic brainstorming about how to bring about its demise, there was an impressive restraint from most participants, even when the behemoth’s name was invoked. One bookstore leader wrote into the chat at the end of day one, “Make sure your legislators know that you support anti-trust legislation that would force Amazon to be broken up!!” But overall, people seemed to understand that Amazon isn’t going anywhere anytime soon. Rather than waste resources trying to bring down a monopoly, the focus was on community action and giving bookstores a fighting chance.

So often these conferences are full of good intentions that die at the bright red “Leave” button, with participants finding themselves staring at their own reflections on a darkened screen, but as Reimagining Bookstores ended, participants seemed energized. A bulletin board was created to continue the discussions and an email group for the nearly 600 participants was launched.

The conversation about the future of bookselling has only just begun.

Two weeks out, after witnessing firsthand the true care booksellers had for the employees that work for them, a major departure from Amazon’s blatant labor violations, I’m feeling even more committed to bookstores. The next time I desperately need a buzzworthy novel, I’ll head to my nearest indie shop rather than ordering it from… well, you know where. Customers are also stakeholders in this reimagining. If we keep showing up for them, booksellers will keep showing up for us.

We’re in this one together. As one of the participants said, “I’m staying at the table.” I will, too.•