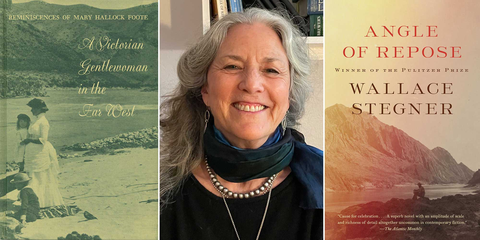 In late March, Nevada City is chilly and between rains, most of its snow melted away. In a few months, this small Northern California city will be a high-fire-risk zone.

Sands Hall found her writer’s desk facing the forest by way of a garage apartment in nearby Grass Valley, where she went looking for a fresh start in 1994. She had left a cult, then gotten a master’s degree, then ended a relationship, all in succession. A friend offered her the apartment, and it was there that she returned to acting and singing. In Grass Valley, she found an artists’ community, a place to play music, and an Equity theater where she could put on shows.

Before she arrived, her only reference for the gold country town that became her home was Wallace Stegner’s Angle of Repose. Now, though, the 1971 novel, considered a classic of the West, leaves a sour taste in her mouth.

As she tells it in an investigative essay in the Spring 2022 issue of Alta Journal, Hall was working on a stage adaptation of Angle of Repose in 1998 when she came upon a literary controversy so damning that it derailed production and spurred the creation of another show. Eventually, that effort grew into a campaign to set the record straight.

In the decades since 1998, Hall has combed through Angle of Repose and A Victorian Gentlewoman in the Far West: The Reminiscences of Mary Hallock Foote, the book on which Repose is based. Stegner’s novel borrows heavily from Reminiscences, copying passages and metaphors, including the imagery that would give Stegner’s novel its title. “Scene after scene drawn directly from Reminiscences shows up in Repose, as do many lengthy verbatim quotes,” Hall writes. “Troublingly, even as Stegner uses Foote’s descriptions and insights, he subtly yet thoroughly denigrates her character.”

“I really, deeply, desperately, hugely wanted to tell it when I understood that it wasn’t just plagiarism,” Hall told me.

“I did feel like a detective often, prowling on fascinating things,” she said during a Zoom interview interrupted briefly by her cats, Boo and Radley. “And certainly, you know, if I had a wall [of clues] like the detectives have, it would have been full of all kinds of things.”

An example: During one trip to the Stanford University Archives, she found a condolence note from Foote’s assistant to Mary Hallock Foote and her husband, Arthur, following the death of their daughter Agnes. Agnes died as a teenager, but the note references when she was a young girl; there’s also an Agnes in Repose, and Hall believes the note may have been Stegner’s inspiration for the character’s death as a child.

Hall’s copies of Repose and Reminiscences are well-worn and thick with Post-it notes marking where Stegner copied Foote’s language. She says she has enough material to write a book: “It’s a really vast and far-reaching story.”

As a writer, Hall straddles fiction and nonfiction, which includes her informative and deeply reflective memoir, Reclaiming My Decade Lost in Scientology, and the play Fair Use, about Stegner, Foote, and the ways their work has become entwined. But Fair Use is a work of fiction; Hall’s Alta essay, by contrast, brings much of her perspective as a writer and the experiences of women before her into the story.

Writing emotions into a story as Hall does, especially a nonfiction story, especially writing as a woman, is opening yourself to a new level of criticism. Being vulnerable—being angry—is risky for a writer who might be deemed bitter. One of the ways that Stegner undermines Susan Burling Ward, the fictional Mary Hallock Foote, is by making her disloyal and quick to anger.

But, Hall suggested, it makes sense to revisit Stegner and Foote while we’re in the middle of a cultural reckoning around women’s voices and who tells whose stories. “This is something men have felt free to do to women’s work,” Hall told me. And readers share Hall’s outrage: “The practice of ‘borrowing’ language from women writers is old, and still very much alive,” the writer Ruby McConnell wrote on Twitter. “It’s the story of a kind of murder,” novelist Sarah Stone wrote.

Editor’s note: An earlier version of this story suggested Wallace Stegner’s assistant sent the Footes a condolence note; that note was from the Arthur Foote’s assistant and was in Stegner’s papers.