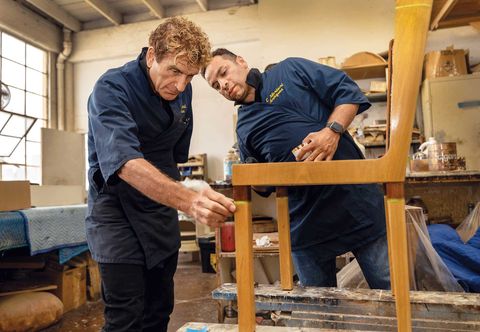 Leonardo is widely and deservedly regarded as one of the greatest artists of the Western world. But a huge volume of his artistry was devoted to practical inventions, from a machine gun concept for the reigning military authorities to designs for a parachute, a helicopter, and a glider that, if it had been built today with an engine, would surely have been capable of flight.

He sketched the organs and muscles of the human body. Understood the possibility of optics and lenses for magnification. Played musical instruments and wrote treatises on a variety of subjects, from the formation of mountains to aging to philosophy.

As a painter, he was responsible for the Mona Lisa and The Last Supper—two masterpieces of the Renaissance. If they were all he had done, his reputation would still be immortal.

This publisher’s note appears in the Fall 2022 issue of Alta Journal.
SUBSCRIBE

Leonardo was living proof that there is a fine line between high Art with a capital A—like that in museums—and the most beautiful and useful works of master crafters. In this issue, we intentionally blur that line.

We’ve sought to discover and applaud the artisans whose skills and creations rise to the level of Art, even though they may not be formally categorized as artists. Their work is spectacularly beautiful. And it requires study, practice, devotion, and talent—prerequisites that we normally associate with artists.

In Japan, there is a tradition of naming and venerating Living National Treasures. These are creators whose artisanal skills are so extraordinary that the whole country is encouraged to honor and celebrate them. The designation divides crafts into eight categories: pottery, textiles, lacquerware, metalworking, doll making, woodworking, papermaking, and other.

We don’t have quite the same tradition here in the West. But perhaps we should. And in this issue, we spotlight those creators and crafters who might be nominees, whose skill and devotion create objects and experiences worthy of celebration and collecting.

This issue is a voyage of discovery during which readers will encounter the amazing work of Claudio Mariani, who restores furniture using traditional European techniques. His handiwork is almost invisible in restoration, and the pieces he reproduces are almost more perfect than the originals.

Our issue also features the amazing pottery of Tung Chiang and the exquisite mochi of Frances Hashimoto. We profile the best purveyors of heirloom seeds, the guitar-string wizardry of Gabriel Tenorio, a printer of artisanal stationery, and a designer of original millinery—as well as makers of rare jams, various distillers of fine spirits, and other craft specialists.

Alta Journal was launched to discover and document arts and culture, invention and exploration, with an emphasis on the sensibility of the North American West—a geography that spans the coast, the mountains, and the high deserts, from Texas in the east to Hawaii in the west and from northern Mexico to southern Canada. More important than latitude and longitude are attitude and sensibility. We had a hunch that boundaries are more fluid out here. That science and technology count as creative pursuits. That exploration and discovery are ongoing activities of our readers, writers, and editors. That surfing, poetry, and software all attract creative minds.

The one thing we might have missed, at our founding, is the astounding number of makers who care deeply about craft, who build objects and experiences of beauty and functionality, and whose work inspires us and makes our lives better. This issue of Alta is our course correction.

While we may not always make Leonardo’s first class, we are determined to operate within the second class. And as is often the case, it’s our readers and writers who lead us to see more.•

Related Story
The End of Hibernation
Will Hearst Will Hearst is the editor and publisher of Alta Journal, which he founded in 2017.
Advertisement - Continue Reading Below
More From Dispatches
An End-of-Life Battle
Rounding the Horn
Advertisement - Continue Reading Below
You Are Here: My Geography of Conflict
The ‘Believer’ Returns
You Are Here: Street Art in Suburbia
Making Sense of Morrissey
You Are Here: A Game to Get Lost In
New Sonia Romero Mural
Alta Finalist in 28 LAPC A&E Awards
Faith Ringgold at the de Young