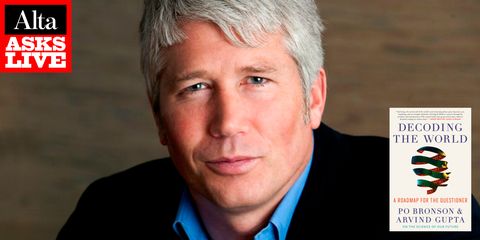 Where is civilization headed? How can we live meaningfully in an uncertain world? And what does the future hold for the planet? Author Po Bronson’s latest book, Decoding the World: A Roadmap for the Questioner, is a science, art, and buddy story that travels the globe to tackle the worrisome mysteries that keep us up at night. Bronson sits down with Alta managing editor Blaise Zerega on Wednesday, December 2 at 12:30 p.m. Pacific time. Join us!

Po Bronson is the managing director of IndieBio, the world’s leading biotech accelerator, and general partner at the venture fund SOSV. His notable investments include advancements in carbon sequestration, cell-based meats, and bee health; AI drug design for undruggable cancers; and new processes for renewable fuels.

Bronson was a finance and tech journalist covering Silicon Valley for Wired and the New York Times Magazine and an op-ed contributor to the Wall Street Journal. He is a frequent contributor to Alta Journal. His science journalism has been honored with nine national awards, and he is the author of seven bestselling books that are available in 28 languages worldwide. His work has been cited in 185 academic journals and 503 books.

Most recently, Bronson is the author of Decoding the World: A Roadmap for the Questioner, with Arvind Gupta.

Decoding the World is the most intense fusion of science and art since 1979’s Gödel, Escher, Bach. It is an attempt to explode science out of its silo, out of its ivory fortress, and integrate it with philosophy, literature, economics, and pop culture.

Decoding the World, at its core, tells the story of a friendship. It’s a buddy story. It starts with Bronson coming to IndieBio—and ends two years later with Gupta leaving IndieBio. Gupta is fearless, a radical experimentalist. Bronson is like a detective, patiently looking for clues others have missed. When they meet, their styles mix and create a quadratic speedup of creativity. Yin and yang crystallized.

As Gupta’s departure draws near, he struggles to leave the sanctum he created, while Bronson has to prove he can keep the “indie” in IndieBio after Gupta is gone.