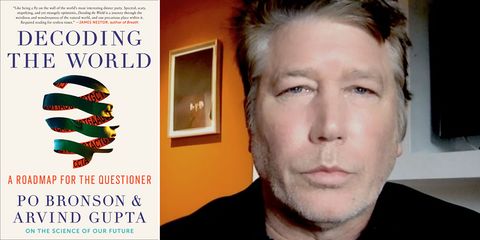 Decoding the World: A Roadmap for the Questioner is a buddy tale for nerds—and that’s meant as a compliment. Cowritten by bestselling author and Alta contributor Po Bronson and biotech investor and entrepreneur Arvind Gupta, the book is a collection of essays that offers satisfying (and entertaining) answers to some of the biggest challenges facing the human and natural world. Among them: the causes of and possible cures for cancer, the reasons for honeybee colony collapse, and the prospect that artificial intelligence might one day turn on its creators—us.

A narrative about Bronson and Gupta’s friendship and professional partnership underpins these essays. Gupta—the doer—founded the biotech accelerator IndieBio in 2015 to invest in and support startups. Bronson—the thinker—joined as strategy director about five years later. But as the book progresses, their roles reverse and (spoiler alert) Gupta departs IndieBio. He joins Mayfield, a Silicon Valley venture capital firm, and Bronson takes over as IndieBio’s managing director. Lending fun to the pages are chapter titles drawn from news headlines, cartoon images of the authors’ faces to indicate who is writing each section, and screenshots of their text messages, which reveal high-minded musings, friendly banter, and life decisions. An early chapter, which begins with a discussion of BuzzFeed’s infamous blue-dress poll that nearly broke the internet, ends with this foreboding text message exchange:

Bronson: …thinking about how Tinctorium was having such a hard time raising money when it’s such an incredibly good company
Bronson: VCs should be throwing money at them…while all these other dumb companies in the valley rake in tens of millions
Bronson: I just got really angry.
…
Bronson: Do you get mad?
Gupta: no
Bronson: really?
Gupta: I think about being a Seed/A investor, where I can help these startups get to the next level
Bronson: leave IndieBio?
Gupta: I don’t know. So torn.

In addition to leading IndieBio and writing books and journalism, Bronson is also known for cofounding San Francisco’s Writers Grotto, which provides community and support to local writers, in 1994.

Alta caught up with Bronson via email to discuss Decoding the World.

Was there one central question that inspired you and Gupta to write Decoding the World?
Yes. How do we navigate our future? This future, which to many (at times) feels like chaos, feels like doomsday—with climate change, a war on truth and weaponization of hate, with artificial intelligence intruding on our privacy, with rogue genetics, with such inequality. So, what does the near future look like? How are we going to address these massive challenges?

Your book’s subtitle is A Roadmap for the Questioner. Whom do you mean by “questioner”?
Questioning things is at the heart of science, at the heart of philosophy, and at the heart of art. We wanted to get science out of its silo, to artistically integrate it with pop culture and literature and economics. We believe a lot of people identify as questioners. Science is simply this: asking questions and running empirical experiments to find the answers.

How did you and Gupta decide which news headlines, and consequently what areas for innovation, to examine?
The book was run as an experiment. We didn’t know what would work. We started many chapters that didn’t work, and we even include one of those chapters—we just cut it off at the point [where] it started to fall apart and made a note: “this experiment failed.” One of our fundamental messages is to stop pretending we can plan our way to solving climate change and other challenges the world faces—we need action, and we need massive experimentation.

What is your favorite headline and chapter name?
“This Guy’s $35,000 Cat Clone Looks Nothing Like the Original.” The news item was about a guy who cloned his cat, only to discover that clones don’t necessarily look the same. It’s a chapter about how genetics really works, highlighting how genetics is not deterministic. We have always considered it deterministic, and genetic determinism is arguably a concept that has altered the last 150 years of philosophy and social science. The chapter ultimately argues that if we’d actually understood genetics 150 years ago, the history of recent philosophy would have been different.

You and Gupta ask about many areas of scientific inquiry and discovery. Which one personally interested you the most?
My deepest interest is how the brain works. Even top neuroscientists aren’t necessarily aware of the recent discoveries of how neurons create a record of their firing, which they encode into a traveling packet of genetic code, which can then cross synapses between neurons. With this traveling code, you can replay memories, like using sheet music with a player piano. This will have a radical impact on understanding cognition and consciousness.

Of the many researchers, scientists, and risk-takers you and Gupta write about, which one just might one day become a household name?
The one with the highest likelihood is Uma Valeti, the founder of Memphis Meats, which was the world’s first cell-based meat company and is, we believe, the company with the biggest lead in the space—and closest to market. Uma was a cardiologist at the Mayo Clinic, and when we first funded him, we had zero idea if it would work. Now there’s a hundred companies trying to do it.

This is not the first book you’ve coauthored. How did you and Gupta work together?
This is the most fun I’ve ever had writing a book! Since the day I first walked into IndieBio, our minds melded into a phenomenon we nicknamed “the quadratic speedup,” which is a term borrowed from quantum. We wrote the entire book in the late evenings, texting each other constantly (and we include some of those texts between chapters).

What book is on your to-read-next list?
Infinite Powers, by Steven Strogatz. It’s about calculus!

Give us the elevator pitch for your book.
How about the movie-line pitch? It’s a buddy story. It starts with Po coming to IndieBio and ends with Arvind leaving IndieBio. Arvind is the doer, Po is the thinker, but over the course of the book, they learn from each other. In the end, Po has to keep the indie in IndieBio after Arvind is gone.

Decoding the World: A Roadmap for the Questioner by Po Bronson and Arvind Gupta

Blaise Zerega Blaise Zerega is Alta Journal’s managing editor.
Advertisement - Continue Reading Below
More From Nonfiction
By the Book
Underneath the Radar
Advertisement - Continue Reading Below
If You Build It, They Will Come
Six Essential Books by Doug Peacock
Doug Peacock Still Answers the Call of the Wild
The Gene Pool
Rosebud Awards: Best Nonfiction Book
See You at the Crossroads
Jann Wenner Doesn’t Get That He’s Doing Just Fine
Excerpt: ‘I’ve Had to Think Up a Way to Survive’