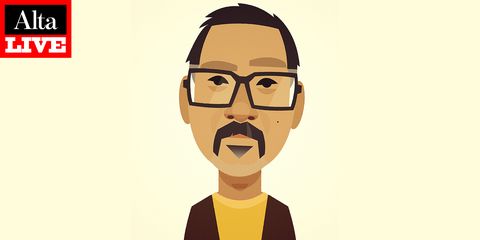 Stanley Chow might not be a household name, but we’re pretty sure you’re familiar with the illustrator’s work. From his portraits of the New Yorker’s (and Alta Journal’s) writers and contributors to his images of Netflix’s Peaky Blinders series for billboards, Chow’s style is instantly recognizable. The artist joins Alta Live to share some of his favorite work, discuss his inspirations and processes, and explain his newest project: custom NFT avatars called Chowies. Join us!

Stanley Chow was born and raised in Manchester, England, where he currently resides. He began his career in 1997 as a fashion illustrator and storyboard artist and has since become one of the most highly respected and established artists in the U.K. He works with various media in the advertising, design, publishing, packaging, gaming, animation, and interactive spheres. Most notably, Chow was nominated for a Grammy Award for his design work with the White Stripes in 2008. He is probably best known, though, for his editorial illustrations and portraits of the staff writers of the New Yorker.•