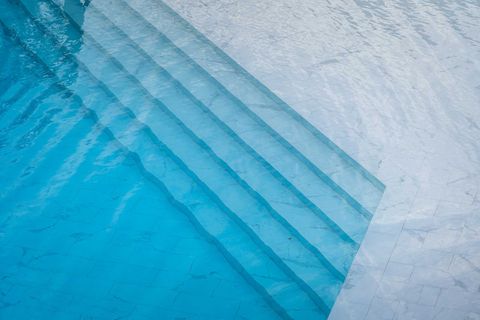 Literature abounds with scenes of swimming, of bodies plunging for joy or escape into oceans, lakes, and rivers, but the swimming pool has a particular hold on the modern literary imagination. Within tight, geometric boundaries, the pool allures, an artificial encapsulation of wilder longings. Its limits intensify its effects, heightening the brilliance of the water, so dazzlingly, improbably blue, as it laps at hard, unforgiving edges. Perhaps because they’re rarely in the income bracket that enjoys them, writers particularly love private pools. Emblems of privilege, they combine invitation and menace, offering up the narrative temptations of sex and violence. A pool without a body in it is as tantalizing as an unfired gun.

F. Scott Fitzgerald knew this. He keeps the water of Jay Gatsby’s decadent “marble pool” markedly empty until the final act of The Great Gatsby. His elliptical description of Gatsby’s demise deliberately confuses the languor of a relaxing body with the weight of one eternally at rest. Drawing our eye to “a faint, barely perceptible movement of the water as the fresh flow from one end urged its way toward the drain at the other,” he reminds us that pools are, after all, just fancy feats of plumbing. To die in one, laid out on an ungainly “mattress,” leaking “a thin red circle” as the wind and the leaves slowly revolve one’s inflatable bier: How absurd! And how—to use a search term that crops up repeatedly in connection with public pools—gross! That thin red circle, a tiny contaminant, spreading inexorably. But of course, no imperfection is tiny in a swimming pool: no leak or crack can be left unattended. A pool is only pristine when it is full of water and empty of people—sparkling, inviting, unsullied by human effluvia. (Empty of water, it’s just a wide-open grave.)

Ironically for a novel purportedly driven by frustrated desire, no sexual frisson attaches to Gatsby’s pool. No frolicking in the shallows, no brushes of skin underwater. While accidents may happen in a private pool, there are no accidental encounters. It’s only at the public pool that we plunge into the gross unknown of other people’s strange, unruly bodies. It’s only there that the discreet ogling of strangers has the potential to become indiscreet: gross indecency. In Alan Hollinghurst’s early novels, set in London’s gay communities in the years just before AIDS, swimming pool scenes are preludes to sex or suffused with its possibility, whether the space in question is a subterranean private members’ club or the open cruising ground of the ponds on Hampstead Heath.

No such tingle of possibility excites Neddy Merrill, the titular swimmer of John Cheever’s 1964 story, in his brief and jarring dip into the public pool. Coming roughly halfway through his attempted odyssey home via the private pools of his suburban neighbors, it is not exactly a turning point. Doubt and fear have already crept in. Pools he remembers as shimmering, welcoming, and bottomless as the drinks start to appear boarded-up and drained away, and a summer storm, a deluge of useless, untrammeled water, has already sluiced down on him. Yet the pool at the rec center is another order of disorientation. Immediately on entering, Ned is “confronted with regimentation” in the form of showers, footbaths of a “cloudy and bitter solution,” identification disks, and chlorine. A hyperactive Cold War imagination makes the place a gulag, with lifeguards on their towers blowing “police whistles.” Ned registers the other swimmers only as faceless, ungovernable assaults on his senses, bodies that shriek, bump, splash, and jostle. The contamination he fears, however, is not bodily but social, the risk that he might “damage his own prosperousness and charm” by dipping his toe in these murky waters. What Ned fails to understand is that the superficial virtues he prizes so highly are illusions: already damaged, already cracked, by the end of the story they will have drained away completely.

From Cheever’s solitary swimmer to Julie Otsuka’s The Swimmers is a journey from alienation to democracy—from the private pool, the emblem of lonely and self-destructive privilege, to the shared pool as a space of profound human connection. Otsuka’s underground swimmers, members of a self-selecting club, speak, at first, as a collective. No glimmer of sexual desire disturbs their waters, despite the presence of barely clothed near-strangers. Instead, their pool is a site of psychological repair, where the differences between people—“addicted, enabled, embattled, embittered, out of print, out of luck,” and so on—are flattened into a single voice, each distinguished only by their speed in the water. The rules are not experienced as oppression, but internalized, obeyed, and enforced by mutual consent. They are hygienic—hot shower with soap for two minutes—and interpersonal: “Be nice to Alice.” Respect for bodies and for people, these rules suggest, is vitally connected. Leaking bodies and troubled souls are both protected by small acts of kindness.

The crack in the pool, when it appears (or does it?), prepares the way for the equally baffling cracks that will fan out and deepen in Alice’s memory. Like the line of red in Gatsby’s pool, the line of black in Otsuka’s novel is a transformation disguised as an interruption. A swimming pool is always subject to contamination, permeable in its very essence, a temporary barrier against the nature of water to soak into the ground, to drain, to evaporate. The crack is inescapable, a reminder to the swimmers—and the reader—that the end will come. We are bound together as human beings, across time and civilization, by the desire to bathe in clear water—a desire that we try to capture and contain in swimming pools, impossibly. Like our individual lives, our pools sparkle with possibility and are tantalizingly finite. So we dive in, ignoring the cracks.

Join us on Friday, September 16, at 5 p.m. Pacific time, when Otsuka will talk to host John Freeman and a special guest, the Pulitzer Prize–winning author Michael Cunningham, about The Swimmers. Be sure to visit the Alta Clubhouse to let us and your fellow California Book Club members know what you think of the novel. Register here.

Related Stories
A Place for Us
Excerpt: ‘The Swimmers’
Why You Should Read This: ‘The Swimmers’
Joanna Scutts Joanna Scutts is a literary critic and cultural historian and the author of Hotbed: Bohemian Greenwich Village and the Secret Club That Sparked Modern Feminism.
Advertisement - Continue Reading Below
More From California Book Club
Announcing Winter 2023 Books
Excerpt: ‘Gordo’
Advertisement - Continue Reading Below
California Book Club: Robinson Transcript
Event Recap: Kim Stanley Robinson
High Costs of Convenience
‘The House of the Spirits’
‘Less’
‘Maggie the Mechanic’
Introducing Cory Doctorow for ‘The Gold Coast’ Eve
The Simultaneity of Kim Stanley Robinson’s Visions