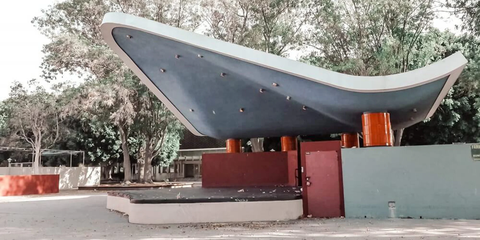 When I think about the West L.A. Courthouse, I think about pro skater Gabriel Rodriguez, a Mid City legend who passed away in 2019 at 46. With a style as smooth as his pants were baggy, Rodriguez was able to grind and slide the courthouse’s ledges with a rare grace. His progressive trick selection—from a waist-high frontside tailslide across the stage ledge to a nollie backside tailslide—set the standard for Chocolate Skateboards’ inaugural cinematic offering, Las Nueve Vidas de Paco. A classic skate video, Vidas featured a predominately Black and Brown team making their names across legendary Los Angeles skate spots. Many skaters of my generation grew up memorizing it trick for trick.

Much has changed since Rodriguez’s 1995 video appearance. When I arrive at the courthouse in December, making a beeline after a six-hour drive from Sacramento to a family visit in Pomona, I pull up to a plaza legally open to all skaters since 2014. It’s one thing for a city to fund and build a skate park, but to make an existing structure legally skateable is truly unique. The original white concrete benches/planters were replaced with metal ledges, similar to what you might find at a skate park, to the dismay of some skaters who wanted the obstacle of the original concrete ledges. Regardless, the plaza still has its challenges and is free and open for any skater to enjoy without hassle.

In 2018, skaters learned that the plaza would likely be demolished, along with the existing civic center buildings, to make way for the West LA Commons project, slated to start construction as soon as 2023.

A “mixed-use community,” the Commons project includes plans for over 900 residential units with “more than 430 service-enhanced affordable units…[serving] families, seniors, and people experiencing homelessness.” The Los Angeles Conservancy hopes parts of the existing structures will be kept, including the mid-century modern facades at the front of the courts and municipal buildings, through creative reuse tactics, which would save some elements. Located just west of the 405 along Santa Monica Boulevard, the project will help efforts to address California’s housing crisis, but it will also eliminate the legendary, legalized skate spot known throughout California.

Instead of stretching, I do a couple of laps around the courtyard. There are a handful of other skaters about on this random Friday afternoon: someone measuring the height of the stage against the standing length of their board; some locals skating the newly installed round rail near the municipal building; a longboarder with dreadlocks and a DSLR in hand, taking photos of the scene, before exiting just as quickly. I set a water bottle near a planter between the courthouse and the municipal building. Both form the borders of this L-shaped courtyard, with the West L.A. Library at the northern border facing Santa Monica Boulevard. The signature structure of the courthouse is a Googie-inspired amphitheater with a waist-high skateable concrete stage sitting in the middle of the plaza and looking like a parking space for George Jetson. I try to muster a noseslide on the shortest portion of the stage ledge and barely clip the top before falling.

Preserving some part of this course is merely the latest fight for legal local skate spots for West L.A. skateboarders. The 2010 creation of Stoner Skatepark, a popular spot nearby, was a massive undertaking, with a local skate commission developed to address community requests, including noise-reduction efforts installed throughout the park. Skaters who helped create that skate park later worked with Nike Skateboarding and the city to turn the civic center into an official skate plaza. The West LA Commons website notes that it’s working with the Skatepark Project, which previously helped build Stoner, to “figure out ways to best honor the rich street skating history at the civic center property…and find ways to safely incorporate it into the project.”

Legal or not, nothing about the courthouse will prevent my board from hitting a crack and propelling my body into the ground like generations of skaters before me who wound up sprawled here, staring at the sky wondering how badly they were hurt. In my case, a bloody elbow and increasingly sore ribs on my right side, pretty much delivered on arrival. I skate around a bit more to shake off the fall and do a mediocre 5-0 grind (grinding solely on my back truck) on one of the benches, before pushing into the flat ground in front of the municipal building to do a heelflip, before turning back around and doing a frontside slappy grind on a curb near where I started. The flow of the space is intuitive, with wide-enough pedestrian paths for skaters to pass one another and enough benches for many small sessions to be happening simultaneously.

Like all skate spots I’ve known, I feel the West L.A. Courthouse’s residual history in the soreness of my body after my session. My ribs ache through the holidays from the weight of my elbow smashing against them from the concrete’s impact. I replay the spot in my head all week and imagine the tricks I hope for a chance to try as I heal.

Injuries (or almost-injuries) are part of the exchange all skaters make with the places we ride. The relationship between time, space, and the limitations of our selves is what keeps us skating, pushing each skater to try to land something out of respect for a beloved skate spot, especially one that may soon be a part of history.

Maybe the developers of the West LA Commons will place a plaque in honor of all the fallen skaters. Or, ideally, a statue of Gabriel Rodriguez’s tailslide across the stage, a tribute to the giants who once made the plaza their own.•

José Vadi is the author of Inter State: Essays from California. An award-winning essayist, poet, playwright, and film producer, he lives and writes in Sacramento.