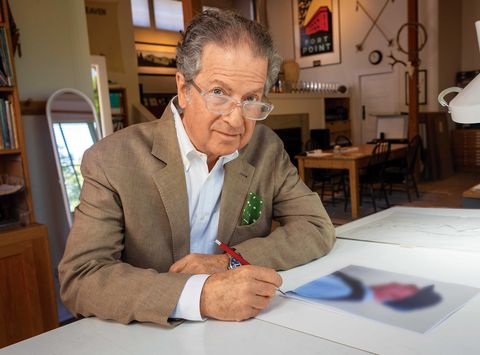 If the bear on the cover looks familiar, don’t fret: it’s just the work of Michael Schwab. The graphic artist has been creating iconic imagery for such clients as Amtrak, the Golden Gate National Recreation Area, and Major League Baseball since he moved to the West Coast in 1973. For this issue’s cover subject, “I couldn’t get a California black bear in my studio,” Schwab admits, “so I went to my library of animal reference photos, as well as online, to study how bears behave when standing up.” His influences range from the big, bold ads created by the Beggarstaff Brothers in London in the late 1800s to the psychedelic rock ’n’ roll posters produced for San Francisco’s Fillmore Auditorium in the 1960s. As for his distinct approach to color—which you’ll also see in the icons for the Alta California Guides in this issue—Schwab says, “It’s like music: the notes have to work together to create a nice chord.” The Marin County–based artist was born in Oklahoma and counts himself among the many “creative types that grew up in the middle of the country and traveled west to fully realize their hopes and dreams. It was OK in California to be different—even admired. Inspiration is all around us.”•

Advertisement - Continue Reading Below
More From Premium
Trailblazer: Nicole Martin
Fiction: ‘My Chicano Heart’
Advertisement - Continue Reading Below
Will U.S. Cities Rise to the Vertical Challenge?
Alta Picks: Our Binge List
Now Open: The Big Orange
The Real Worlds of Alexis Smith
The Dark Season
Marion Davies on Her Own Terms
The Magnificence of M.F.K. Fisher
The Woman Who Turned Orange County Blue