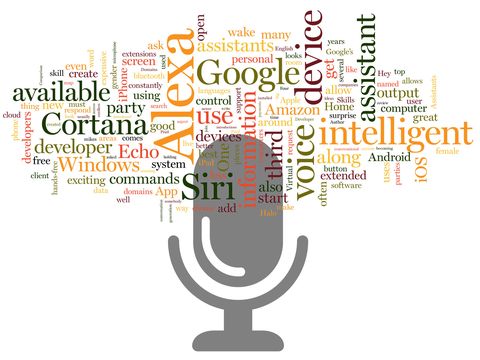 Let’s be honest. The first few times you used Siri, you probably spoke to her as if addressing a young child over a static-y long-distance phone connection. It’s OK to admit that you carefully enunciated one-syllable words and practically yelled.

Or how about the first time you encountered Amazon’s Alexa? Housed in a Delphic black cylinder, she demanded your reverence. I confess that at first I added “please” and “thank you” to each of my requests for the time, for the weather, and to buy more dishwashing detergent.

But now? If you’re like me, you’ve abandoned the pretense of good manners and have little problem bossing around these voice assistants — or their cousins Bixby, Cortana and Google Assistant. These services are found on our ubiquitous smart phones or litter surfaces in our kitchens and bedrooms disguised as so-called smart speakers. What’s more, they’re being embedded in everything from washing machines to robotic vacuum cleaners. Thanks to this amazing, breakthrough technology, you can now ask your refrigerator important questions like, “Am I out of milk?”

It was not supposed to be this way.

When Siri arrived on the Apple iPhone in 2011, she heralded a glorious new age of computing, one where swipes and clicks, logging in and pressing home buttons would no longer be needed. She was flawed, but she was still a new paradigm. Yet the novelty of asking Siri to play music soon wore off. When Alexa was introduced five years later, the dream of ambient computing, of a new voice interface replacing mouse, keyboard and touch screen seemed real again — if only briefly.

After all, Alexa and its ilk represent a glorious blend of voice recognition, machine learning and cloud processing power. An estimated 36 million voice-assistant-powered devices will be in use by the end of this year, a jump of nearly 130 percent from 2016. Alexa-powered devices represent about 70 percent of this market.

Amazon’s lead has enabled Alexa to amass more than 12,000 skills — voice-powered apps — that range from the useful, like controlling smart lights and reminders to quit smoking, to the silly, like a virtual cat that meows. Despite these riches, the most common uses of Alexa are quite mundane, and the overwhelming majority of skills represent a very, very long tail of little to no utility.

“Alexa, set a timer” is everyone’s favorite skill. It’s quite handy when cooking, but this function reduces a marvel of technology to a voice-activated alarm. Runner-up in popularity is playing music, which turns Alexa into a voice-controlled jukebox.

The state of the art is advancing. Google Home has the ability to recognize up to six different voices. And all of the voice assistant services have been outdoing one another in natural language processing. Last fall, Microsoft declared Cortana’s voice recognition had achieved parity with humans, accurately understanding 94.1 percent of speech; in May, Google Assistant claimed to have cracked the 95 percent threshold.

These advances, coupled with our natural ability to speak faster than we can type, suggest that we are finally on the cusp of pervasive voice interfaces for nearly all our computing needs. And yet … do we actually want such a future?

As Alexa learns from us, she’ll soon anticipate our needs before we do. But what if she gained some personality? Falling in love with a voice assistant like the one in the 2014 movie “Her” has become quite plausible for some. We’re hurtling toward the uncanny valley, where replicas of ourselves and our activities may lead to revulsion.

But it’s not some dystopian future I’m worried about. Voice assistants are not the horsemen of an artificial intelligence apocalypse that the likes of Elon Musk, Bill Gates and Stephen Hawking have warned against. They are just the latest technology to restrict us from expressing those qualities that make us human. Pandora’s voicebox has been opened.

Why talk to anyone when our voice assistants can do it for us? As someone who laments the decline of good old-fashioned conversation, I thought I might find solace that these voice assistants had gotten us talking again. But not even that is true. Maybe we need a new Alexa skill: “Alexa, shut up and let us humans talk.”

• Skill Finder: An easy way to find skills you need and those that you just think you do.

• Uber: If calling a ride with a tap on your phone is too complicated, you can ask for one the old-fashioned way — with your voice.

• Find My iPhone: Works as promised. Your phone will ring when you lose it beneath the sofa cushions.