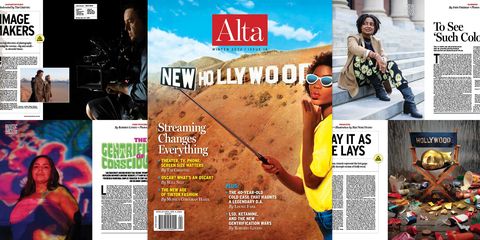 Like many Californians, my wife and I had dreams for 2022. Filled with skiing trips, toddler playdates, and maskless days at Disneyland, many of these hopes, owing to the Omicron variant, have sunk like the eponymous submarine in U-571.

Three weeks ago, the temptation was to behave as we did when the pandemic first struck, letting hours slip by in an indistinguishable blur of work and regret for having watched season four of The Crown in two evenings. But wallowing would deprive us of some life-affirming experiences this year. Since we are not in lockdown, we’ve decided to tick some boxes off our bucket list.

So we signed up for scuba diving off Catalina. This new (dare I say, intentional?) approach has already affected other aspects of our lives, from what we cook to when we set our alarm clocks.

We wished this pandemic would have ended, but at least, we’re using it to redefine what time, health, and happiness means to our family. If change is inevitable — it’s best to adapt on our own terms.

This idea of adaptation is at the heart of the winter 2022 issue of Alta Journal. Titled the “New Hollywood,” the magazine’s writers, artists, and editorial staff examined how major disruptions, ranging from the pandemic to shifts in technology and audiences’ tastes have impacted the film industry to creating new winners, new losers, and new opportunities.

Alta’s editor and publisher, Will Hearst, captured the spirit of this remarkable issue with one line: “The question that interests us is not the future of technology but how creative people will use the new capabilities to advance storytelling, art, and culture.”

Elsewhere in the issue, Tim Greiving joins three top directors of photography in a roundtable to press a similar question: How has the emergence of streaming affected their work? “It’s democratized the storytelling universe, which I think is amazing,” said Ava Berkofsky, who is best known for their work on Insecure. “There’s more diversity in whose voice is getting heard, because there are more outlets for it.”

Monica Corcoran Harel writes about film’s influence on fashion throughout the decades and how streamers and TikTok stars are reversing the flow of inspiration. Now, in some instances, shows are being created because of a fashionista’s influence. “Meaning our new movie stars really are the girls next door—if they’re making style videos in their bedrooms, that is,” says Harel.

Novelist Will Self pulls no punches as he takes aim at Hollywood and its annual ceremony of self-adulation: The Academy Awards. As Hollywood scrambles to make the ceremony relevant again, trying everything from “virtue signaling” to diversifying the academy’s jury, Self remains unimpressed. “[Harvey] Weinstein may have gone, but the mentality he epitomized lingers on, like the rotten smile of some Chershire cat.”

Meanwhile, Robert Ito covers another phenomenon taking place in the film industry: Hollywood’s fight to keep production companies in Los Angeles (or, at least, in California.) Aptly titled, “Keeping Hollywood in Hollywood,” the article looks closely at the fiscal strategies and attempts Hollywood has made to compete with rival areas like Toronto, the United Kingdom, and Georgia, each of which is vying to be the next capital of the content-making universe.

Yet, just when it seems we could sit back and enjoy the drama unfolding in Hollywood from our sofas, David Thomson flips the script and argues that the movies simply reflect our real-life anxieties. “They are a cave painting of our struggle with the Dark,” Thomson writes.

But what do the creators in Hollywood watch? Producers, directors, and showrunners weigh in on their favorite shows, with playwright and screenwriter Tanya Saracho suggesting We are Lady Parts on Peacock. “We are Lady Parts is about an all-female Muslim punk band, but’s really about sisterhood, and fierce female friendship, which is my favorite thing in the world.”

Outside of Hollywood, Roberto Lovato investigates what he calls the looming “psychedelic-industrial complex” in San Francisco's Mission District, a situation in which “Latinos and other non-whites have either zero or limited access” to psychedelic treatments. Denise Hamilton resurrects the tale of Toypurina, an Indigenous female shaman who led a revolt against Spanish rule, and Lydia Lee shares the compelling survival story of the West Coast’s only native oyster.

Whether you are inspired to revisit old Hollywood classics or to binge your favorite show on Netflix, we trust this print edition will fill your winter with a sense of awe and the magic of good storytelling.•