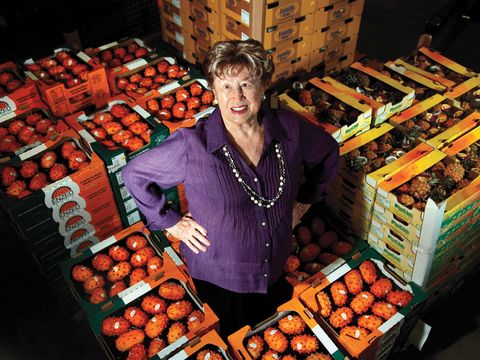 It was the Saturday of this year’s Women’s March. I was about to finish a weekend shift at the Los Angeles Times when my wife texted me the sad news: Frieda Caplan had died at 96.

News organizations around the world quickly published obituaries on her, including one by my colleague Dorany Pineda, for which I received a co-byline for contributing the word “loquacious.” Those initial remembrances and the ones that followed told the same, righteous tale: the “Kiwi Queen” was a legend many times over.

She was the first American woman to own and operate a wholesale produce company, succeeding in an industry that remains so macho, it makes a hot dog factory look like a nunnery. From the headquarters of her namesake company in the wealthy Orange County city of Los Alamitos, the child of working-class Russian immigrants changed how the United States ate.

Frieda started Frieda’s Inc. in 1962, selling fruits and vegetables in Los Angeles’s famous Wholesale Produce Market. By 1979, she had so outhustled and upstaged rivals that the trade journal the Packer (the bible of the produce industry) chose Caplan for its Produce Man of the Year award. With her usual panache, she returned the plaque. Ever since, the prize has been known as Produce Marketer of the Year.

But Frieda Caplan was far more than a pioneering food hawker. Frieda was a friend.

I couldn’t help smiling when I left the L.A. Times office that Saturday and began to call people who needed to know about her passing. I was sad but also in awe. Frieda left us on a day devoted to womanpower.

That was Frieda: impeccable timing, with the good sense to know that weekends aren’t for relaxing but for work—because the work is fun.

I didn’t even know about the first time I encountered Frieda until later. I was part of a 2015 panel on the future of California at Rancho Los Cerritos Historic Site in Long Beach. She was in the audience as I thundered to a group of shocked grayhairs that their children and grandchildren who were leaving California weren’t going to be missed and that they were quitters.

Frieda must’ve loved my rant, because I soon received a message from Oakley Boren, then a social media consultant at Frieda’s. Boren said Frieda wanted to have lunch with me because she was a fan of my food writing. Was I available?

But before our meeting, Frieda and I met again at the annual luncheon of the Fresh Produce and Floral Council, the powerful trade group that represents everyone from growers to wholesalers to supermarkets across California and the West. The council had asked me to deliver a keynote on how members could tap into the Latino market. I introduced myself to Frieda but barely got to shake her hand. Everyone wanted an audience with her.

My speech went well. But during questions, someone asked for my opinion on Stater Bros. Markets, the venerable Southern California chain whose store aesthetics and advertising campaign seemed stuck in the era of The Andy Griffith Show. I offhandedly remarked that Stater Bros. was “fuddy-duddy.” The room gasped—except for Frieda, whom I saw toward the back doubled over in laughter.

I pivoted to highlight her company—how it didn’t allow its hallowed status to get in the way of innovation and change. The crowd’s angry stares turned into hushed nods of agreement.

Meanwhile, Frieda sat alongside her posse and beamed.

We were going to get along just swimmingly.

Caplan receives the first-ever shipment of kiwifruit from New Zealand to the United States in 1964.
FRIEDA’S INC.

Frieda was in the winter of her life when I met her. But those who knew her best say she lived in an eternal spring.

She stepped down from day-to-day duties in 1990, selling the family business to her daughters. Nevertheless, she showed up to the office almost daily in the decades that followed. Even when she had to rely on a walker, she’d insist on navigating the front lobby stairs without assistance. Those stairs had a silhouette of Frieda at the bottom and photos of fruits and veggies arranged as a timeline that visitors could admire as they ascended the stairs to meet her.

Mary Arrañaga Landis, who worked for Frieda’s from 2010 to 2017 and now runs an olive oil store in Los Alamitos, held the title of “forager”—the person in charge of finding the Next Big Thing. Every Wednesday, Landis would host a show-and-tell in Frieda’s corporate kitchen and showcase the latest goodies.

“You would see Frieda hightailing it down the hall—she would practically knock people out of the way so she could sit right in the front!” Landis recalled over the phone with a laugh. “It was like Christmas for her. She would be the one that laughed the loudest, the one who tasted everything first. Sometimes, she wouldn’t even leave anything to people.”

Landis, who came from a produce family and whose father was Frieda’s contemporary, remembered her former boss as someone who not only took pride in promoting women in the industry, but also reminded them that although the work never ended, they had to find time for themselves.

“I’d get emails from her at 11:30 at night on a Thursday, and I’d come into her office the following day and say, ‘Frieda, what were you doing?’ And she’d say, ‘I had just come back from the LA Opera, so I was inspired and wanted to send you ideas!’ ”

I knew those emails well. She put me on her listserv, which was always quintessential Frieda: charismatic, wisecracking, crusading. She urged us to protest gun violence, to decry anti-immigrant politicians, and to donate to her favorite charities, among them the ACLU, the Anti-Defamation League, and Planned Parenthood.

It wasn’t a one-way conversation, though; Frieda read me voraciously. She signed up for my own weekly personal newsletter and responded to it more often than not. And it wasn’t with a pro forma “good job” or “attaboy.” There were always stories.

Like, how she used to babysit renowned Los Angeles politician Zev Yaroslavsky when he was little. Or the time she organized a party at her house for fellow Leos and Los Angeles Superior Court judge Lance Ito (of O.J. fame) served as the “hilarious” MC.

Another time, she sent an article that mentioned me that I didn’t know about, in UCLA’s alum magazine (she and I were proud Bruins). “You weren’t even born when I introduced KIWIFRUIT IN 1962!” she wrote. “That makes me the oldest foodie around…doesn’t IT!”

As we became closer, I introduced her to my wife, Delilah Snell. Whenever we’d get together, they’d end up talking more to each other than to me—a pioneer woman teaching the next generation about life and business.

“The way you have mounted product…people could learn from you, Delilah,” she wrote after visiting my wife’s store, Alta Baja Market, in Santa Ana, for the first time. “You don’t need signage…your unique spacing ‘system’ does the selling for you.”

“Frieda went through hardships to get what she achieved—as a woman, during a time when it was way harder, and while raising a family,” my wife said when I reminded her about the encouraging message. “She could’ve criticized me, and I’d still take it as a blessing. But liked what I have? She didn’t have to be so nice—but that was so Frieda.”

The last time Frieda and I talked was over the phone this past fall. She was recuperating from a broken leg but was still keeping busy.

“You know I love you, Gustavo,” Frieda began as she asked me to visit Dramatic Results, a nonprofit that provides arts programs to public schools in California, Oregon, and Alaska.

I never got the chance.

It’s impossible to miss Frieda, though. I think of her every morning, when I tend to my finger lime, a tree whose fruit looks like a gnarled pinky and features caviar-like citrus pearls inside; Frieda’s introduced them to American consumers in 2013.

Whenever I see purple, I immediately think “Frieda”—it was her trademark color, and the one that the hundreds of people who attended her celebration of life in February (where I served as one of the MCs) wore in her honor.

And I’m reminded of Frieda whenever I see women in male-dominated industries succeed on their own terms, in their own way—and show us hombres up.

“She never thought that she did anything different,” said Boren. “She’d always say, ‘I’m going to do it. You can’t tell me no.’ And she did it.”

Farewell, Frieda. You were the Jewish grandma this Mexican kid never thought he’d have. So allow me to say now what I never told you in person but what Delilah and I always say about you: Fue chingona. You were a badass.

Gustavo Arellano Gustavo Arellano is the author of Orange County: A Personal History and Taco USA: How Mexican Food Conquered America.
This content is created and maintained by a third party, and imported onto this page to help users provide their email addresses. You may be able to find more information about this and similar content at piano.io
Advertisement - Continue Reading Below
More From Dispatches
Trailblazer: Gustavo Aguirre Jr.
Trailblazer: Mayor Regina Romero
Advertisement - Continue Reading Below
A Maker of Tiny Tableaux
The Butterfly Effect
Flight of the Condors
Being a ‘Double Minority’ Made Me a Better Writer
Imagine a Wilder Future
On a Wing and a Prayer
Hail an Air Taxi!
Songs for the Final Passage