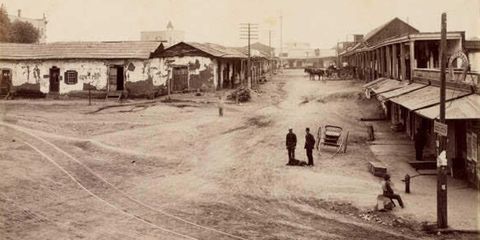 On October 24, 1871, an altercation in the Chinatown district of Los Angeles unleashed the killing fury of a mob. When a dispute between rival Chinese groups threatened to spin out of control, a Los Angeles police officer and a local rancher attempted to intervene. That did not work. The police officer, Jesus Bilderrain, was shot and wounded. Rancher Robert Thompson was shot and died not long afterward. By that evening, a mob of some 500 Angelenos—whites and Latinos—converged in the area (seen above circa 1880 in a photo from the Huntington in San Marino) and began to hunt down and kill Chinese boys and men, shooting and beating them, hanging their bodies from the wooden beams outside nearby wagon and blacksmithing shops. A few Angelenos offered sanctuary, one in his vineyard not far away. Some of the terrified Chinese men sought refuge in the city jail.

The violence claimed at least 18 victims, possibly more. Some 10 percent of the resident Chinese population of Los Angeles was murdered that night. Nearly 10 percent of the entire population of Los Angeles took part in the massacre. I can’t think of any bigger public event happening in Los Angeles prior to this spasmodic bloodletting, with the possible exception of one of the famed horse races that took place now and again in earlier years. But of course this was no horse race. This was a massacre.

Indictments, trials, and a handful of convictions followed, though the sentences were voided within about a year and perpetrators set free from San Quentin.

Though memorialized and no doubt recalled by members of the Chinese and Chinese American community to this day, the Chinese massacre has never been reckoned with in the scale or depth of what is appropriate. A plaque in the sidewalk outside the Chinese American Museum, near the Los Angeles Plaza, is the extent of the city’s acknowledgment of the terror. It’s something, but it’s not much.

If remembered at all, the event is most often referred to in textbook litanies of anti-Chinese violence in the West across the second half of the 19th century. Rock Springs, Wyoming, 1885: a couple dozen, maybe more, Chinese miners killed. Lewiston, Washington Territory (present-day Idaho), 1887: the Hell’s Canyon Massacre, possibly dozens of Chinese miners murdered. These are but the best-known, most notorious incidents. Across the West, both before and after the exclusion acts of the 1880s, Chinese people faced near-constant attacks, expulsion from this or that mining town or western city, ever-present discrimination in laws, heavier commercial taxes, residential segmentation, hurts and heartaches meted out across everyday life, in every way.

Years ago, I found a diary tucked away in the rare books and manuscripts at the Huntington Library. Small enough to fit into a breast pocket, the diary held the daily comings and goings of a tax collector in the Sierra Nevada mountains during the gold rush. Our diarist was a man of few words, jotting down his laconic entries with what must have been a tiny lead pencil. The banality of his life mirrored his clipped entries. “Bought boots.” “Sewed my clothing.” “Went to town.” And then, “Shot a Chinaman.” As if murder was as everyday an act as “bought supplies.” Racial hatred rendered prosaic in three words. In the latter part of his life, our diarist—having sewn racist wild oats in California—became the U.S. envoy to Japan. Think about that.

Think, too, about the Chinese-to-English dictionaries that Chinese immigrants used in their new lives in the West. Everyday phrases translated into usefulness, to be sure. But also sayings like, “Please pay me for my work.” “Please do not strike me.” “I will accept my wages and depart.”

California cities are now taking steps to acknowledge and apologize for such cruelties. The city of Los Angeles’s Civic Memory Working Group, which spent two years preparing its report and recommendations to the mayor, is working to rectify the ways in which Los Angeles grapples with its past. With the support and endorsement of Mayor Eric Garcetti, four committees took up publicly acknowledging the 1871 Chinese massacre as the 150th anniversary approached. (I was a member of the Working Group and am also part of the 1871 memorialization effort.) Exploring such issues as memorial forms and formats, site location, programming opportunities, and funding needs, the committees have been working toward a major public announcement, one that will at long last help all Angelenos better understand, acknowledge, and address this terrible incident, both within its 19th-century context and through the ways in which anti-Asian thought and behavior continue to reverberate through our city and our state. In September, for example, San Jose made a public apology for its racist past, noting, in particular, the arson-caused leveling of one of its Chinatowns in the late 1880s.

As historian Eugene Moy of the Chinese Historical Society of Southern California reminds all of us (Angelenos and those who visit here), “We must honor the people, the early Angelenos, who lived and worked in our community, and whose names should not—and must not—be forgotten.”•