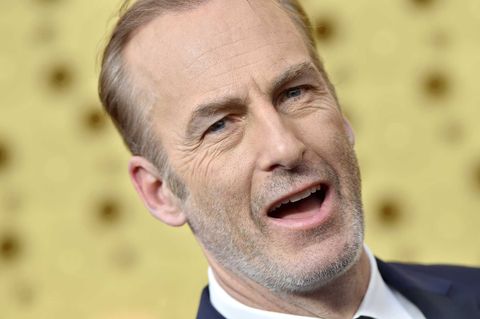 When Bob Odenkirk had a heart attack on the set of Better Call Saul, it was one of the few moments that united Twitter in the fractious summer of 2021. Everyone, celebrity and normie alike, hit the same note of concern, hoping, praying, and meme-ing for the best.

The sketch comic turned leading man has a new memoir out called Comedy Comedy Comedy Drama that begins with the question “Why are you writing a book about yourself? You’re not dying, are you?” (The book was finished prior to his heart attack, lending that question an eerie prescience.) The collective sigh of relief at his recovery from his many fans and admirers bodes well for book sales.

There is another ticking clock that Odenkirk is aware of as he writes: the shelf life of celebrity autobiography and the end of a successful TV series. Even with the unlikely late-career pivot to action-movie star in Nobody or popping up in 1800s period garb in Little Women, it is Better Call Saul’s five-season run (season six begins April 18) that has redefined Odenkirk’s career. It’s hard to imagine the market for this book without that. Although comedy nerds will probably love the Second City and Saturday Night Live palace intrigue, the behind-the-scenes dramas of Chris Elliott’s Get a Life or The Ben Stiller Show may miss all but the most hard-core among us.

Odenkirk’s best-known (which is to say, little-known) pre–Breaking Bad show, Mr. Show with Bob and David, calls to mind the old chestnut often used about the Velvet Underground: it didn’t have many fans, but all those fans went on to create their own art. The HBO series created with David Cross was a landmark in American sketch, a form that badly needed shaking up in the ’90s. (The Kids in the Hall whacked it good, but they were Canadians.) Mr. Show’s absurdist DNA can be found throughout subsequent generations of comedy, including Tim and Eric (of Tim and Eric Awesome Show, Great Job!), whom Odenkirk helped bring to Adult Swim and the (semi) mainstream.

The high esteem that Odenkirk enjoys—especially online—is uncommon in this moment when white male comedians have become a culture-war flash point. The book sidesteps issues of white privilege and punching down, although he acknowledges that the satire he’s written has been outpaced by reality. Cross and Odenkirk once counted Gavin McInnes, cofounder of Vice and the Proud Boys, as a friend and collaborator. (Cross has since distanced himself from McInnes.) With abundant hindsight, I felt uneasy when the memoir lauded Mr. Show castmate Jay Johnston. Johnston was an integral and welcome presence on the series, which ran on and off from 1995 to 1998, with a few reunions and reboots; he also attended the January 6th Capitol insurrection and made the list of FBI suspects. A less loyal Odenkirk would have to acknowledge that his friend turning into a Capitol-storming conspiracy theorist is a pretty fecund sketch premise.

Odenkirk’s path from teenage comedy purist to elder statesman hinges on a lot of lucky breaks as well as seriously hard work. The book alludes to youthful romantic relationships, but those are marginalia compared with his love affair with writing and performing. A pivotal chance encounter with improv guru Del Close makes for a real Hogwarts moment. (It’s also a great story in the Del Close documentary For Madmen Only: The Stories of Del Close.) Meeting Close and interviewing him for his college radio show in a Chicago apartment with a missing window showed Odenkirk that anything was possible. Close’s erratic and rambling stories led Odenkirk to realize there was a path forward for him, even if it was all chaos magic.

Fine-tuned comic instincts come across in Odenkirk’s prose, which is loaded with ellipses and misdirects. His love of Robert Evans’s memoir, The Kid Stays in the Picture, makes me long for the audio version of this book. (A Mr. Show sketch called “God’s Book on Tape” is basically Odenkirk doing Evans as God, a perfect tribute and skewering of star self-aggrandizement.)

Growing up in a large Catholic family steeped in midwestern work ethic prepared Odenkirk to be a writer for Saturday Night Live. The collaborative nature of sketch comedy calls upon different skills than the solitary endeavor of stand-up does, something Odenkirk developed from his numerous siblings. (Not for nothing, Odenkirk’s brother Bill is also a comedy writer, with credits on Mr. Show, The Simpsons, and Futurama.)

At SNL, Odenkirk, like many staffers before and after him, had a conflicted relationship with producer Lorne Michaels. As numerous SNL memoirs and podcast interviews with performers and writers make clear, Michaels is a specific archetype, the boss who’s an easy stand-in for a cold/distant/all-powerful father, putting staff in the position of his brood hanging on his every whim. All that desperate need for approval pinned to one sphinxlike man sounds exhausting. Michaels, with four and half decades mostly at the helm of SNL, has arguably reigned too long as the gatekeeper of American comedy, so it’s no wonder Odenkirk’s relationship to the workplace was antagonistic. His SNL experience set the tone for Odenkirk’s search for comedic independence and his own very different management style when he finally got a shot at his own series.

Comedy Comedy Comedy Drama is not only a showbiz saga, it’s the ultimate memoir of Generation X, a cohort who was always self-aware to a fault but is aging into wizened introspection. Odenkirk embodies some of that generation’s best traits: unwillingness to compromise, resourcefulness, self-starting, and the omnivorous transmogrification of pop cultural detritus into postmodern pastiche. Coming into his own comedically in the shadow of the boomers, Odenkirk went for cult success since mainstream acknowledgment was ever elusive. Only well into middle age did he find himself embraced by audiences and publications like the New York Times Magazine, which saw fit to put him on its cover in February.

Thankfully, this tome has plenty of gratitude and largesse toward the entertainment world, even as his projects like Melvin Goes to Dinner and Derek and Simon got sidelined on Odenkirk’s way to cover-boy status. Odenkirk’s creativity, restlessness, and willingness to challenge himself carry the day, whether he’s turning himself into an action hero, diving into his leading-man role, or developing a limited series based on the memoir of journalist David Carr. Like any good Gen Xer who makes it, sarcasm, self-deprecation, and impostor syndrome are Odenkirk’s constant companions, making him something truly rare in the culture: a relatable star.•