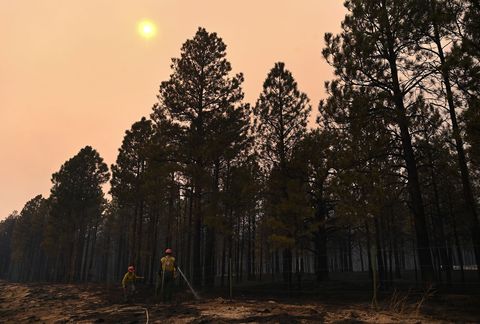 The wind shifted last night, and after a clear day the air is once again filled with smoke. It’s from the Calf Canyon Fire, to the east. The Cerro Pelado Fire, near Los Alamos to the west, the one that poured smoke into town 10 days ago, is quieter, from where I live virtually invisible. Some white haze, a few wispy tendrils, largely tamed. The Calf Canyon Fire is anything but. Yesterday a monster cloud grew above the Sangre de Cristo Mountains in an otherwise cloudless sky, cumulus-looking but more ominous, bruise-like colors around its edges. In front of it floated a different kind of smoke, as diffuse and undifferentiated as fog. The fire is 60 miles away, but it looks as if it’s over the next ridge.

The Cerro Pelado Fire has scorched 46,000 acres. Early on, Calf Canyon merged with the Hermits Peak Fire, caused by a controlled burn set in the middle of an extended drought, and together they total more than 300,000 acres and counting. That’s the largest fire in New Mexico history. Hundreds of people have lost homes (many uninsured) and livelihoods. Centuries-old communities have been destroyed. It’s unseasonably hot and windy. There are fires burning all over the West, and it’s not even Memorial Day.

The first big fire I experienced was here in New Mexico in the 1990s. The sky to the west darkened, the sun an unblinking red eye behind the smoke, and I involuntarily thought of the pioneers watching the prairie burn toward them with nothing for protection but space. At least I had the Rio Grande between that fire and where I stood. The river is a trickle now, not much comfort when a windblown spark can travel miles.

I remember, too, a fire in the Connecticut town where I grew up. Waiting for the bus—I must have been in elementary school—I watched a house burn on a ridge a half mile away. I can see it now: a huge twisting pillar of black anchored in flame, someone’s home collapsing beneath it. It electrified me because it was an amplification of something I had thought benign and now knew could destroy. Also, it was dramatic and beautiful, a glimpse of another reality. Years later, I happened on a fire in a downtown building in New York City that no one seemed to have discovered yet. Silent flames behind big windows, no one else around. Is that how cancer starts, or any calamity? A quiet moment before anyone knows.

I imagine a freight train bearing down and no way to get out of its path.

I’ve learned smoke’s different smells and colors and what they signify. Watching flames jump and roar on the nightly news, I imagine a freight train bearing down and no way to get out of its path. That’s climate change. Today we have 13 percent humidity; a few days ago it was single digits. Everything is fuel waiting for a match.

War, angry people with guns, and COVID: dislocation upon dislocation and the fires only add. The wind shift means the fire’s coming this way, though it has miles to go before we see flames above the ski basin. But it could happen. It’s moving toward Taos and Pecos both. A friend called me from New Hampshire and asked, Do you have your go bag ready? Meaning vital documents and keepsakes, what I would want to save should it come to that. She can be dramatic, and it’s hard to gauge distance and danger from thousands of miles away, but my urge to belittle her question told me it was valid. I told her no, but I know where those documents are, and my car has a full tank of gas, so I’m not cocky.

Last night I closed the windows and turned the HEPA air filters to high but left one clerestory open by mistake. The smoke crept in through that four-inch gap, settled into my nose and eyes, and in my dozy midnight anxiety I felt the presence of the fire, alive, not an abstraction. Thought of Ukraine and the burning oil fields in Iraq, blasted landscapes of billowing black. We humans did that.

We’re responsible, too, for what’s charred to the east and west of me, down south as well. There’s at least one fire in the Gila. New Mexico’s a desert, yes, but we’ve made it more so. How I long for the sound of rain on the roof, that ozone smell of wet air, its promise of abundance. It used to be July and August days would start out clear, the sky a deep and flawless blue, then gradually clouds would build in the west, mass and darken, and by late afternoon start to march army-like east across the Rio Grande Valley. The air would begin to toss, the smell of moisture to reach our house, where my husband, I, and our children huddled on the portal, wrapped in blankets against the suddenly dropping temperature. Just before the storm hit we’d scamper inside, closing doors and windows, watching the rain undulate in sheets across the land, twigs scatter, puddles appear. Thunder so close you could taste it. And then in 15 or 20 minutes, the tumult moved on, blue appeared in the sky, and we went out and stamped in those puddles in the reimagined evening.

What you can’t see can kill you. What you don’t know isn’t always wrong.

It’s been a while since we’ve had a monsoon season like that. Our storms now are fire, wind, and dust. Unseasonable snow falls in the Rockies. Haboobs rage in Arizona. Storms, too, are in the technosphere, on social media and TV. Hate storms, disinformation storms, people getting lost in the forests of their own fear and confirmation biases. Invisible, like a virus—we know a lot about that now. What you can’t see can kill you. What you don’t know isn’t always wrong.

It’s a week later and there’s still smoke over the mountains, but less of it. Calf Canyon is now 40 percent contained, though parts of it will likely burn for months. The fire was caused by humans, a prescribed burn from January that was thought extinguished but reignited in April. Hundreds of square miles have been seared to the point that they’re unrecognizable. People will rebuild, trees and other vegetation will grow back, and the scars will soften, but those scars will never completely disappear. And there will be more fires because fire season is all year round now.•

Related Stories
Letter from New Mexico: Murmuration
Fire Comes Home
Fighting Fire from Above
Anne Pedersen Anne Pedersen is an award-winning writer and a visual artist.
Advertisement - Continue Reading Below
More From Dispatches
You Are Here: My Geography of Conflict
The ‘Believer’ Returns
Advertisement - Continue Reading Below
You Are Here: Street Art in Suburbia
Making Sense of Morrissey
You Are Here: A Game to Get Lost In
New Sonia Romero Mural
Alta Finalist in 28 LAPC A&E Awards
Faith Ringgold at the de Young
You Are Here: Things That Go Boom
A Lighter Shade of Green