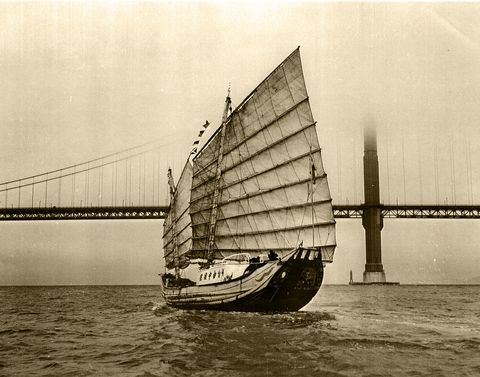 It was both bigger and smaller than I’d thought it would be. After getting off at the wrong bus stop, I’d trekked two miles through humid, 90-degree weather to get to this full-size replica of a Fujianese junk ship in Tainan, Taiwan. Sweat rolled down my scalp and dangled from my earlobes like earrings—and it wasn’t even summer yet. I’d arrived here from San Francisco in late March, two weeks prior. After quarantining in a hotel, I was allowed back into society to visit family and climb around a giant wooden ship. For years, I’d been doing research for my novel on Qing dynasty pirates, and one can’t talk about seafaring in Asia without talking about junk ships. But reading about these vessels had gotten me only so far. My first draft was filled with lush descriptions like “specify dimensions of junk” and “PUT SOMETHING HERE ABOUT MASTS!!” I needed a sense of structure, proportion. I needed a sense of place.

The word “junk” here refers, of course, not to the quality or function of the ship but to the type. Recognizable by their square sails, these ships are known for being intuitive to operate. Their straightforward rigging reduces the crew’s workload, to the point that 19th-century Europeans assumed that Chinese sailors were “refusing duty” or “excited by opium” because of how much time for rest they had while on board.

How intuitive is a junk to operate? Enough that, in 1955, five men in Taiwan with no experience aboard this kind of vessel decided to sail one in a yacht race from Rhode Island to Sweden to protest Communist control of China. According to a CNN article, these men had been separated from their homeland during the Communist revolution years prior. They (plus the U.S. vice-consul who provided them with visas) departed Taiwan for San Francisco on the Free China full of optimism, certain they would survive and attract international attention to their cause, forgetting that the sea has a long history of raising the hopes of man to a crest only to drop and shatter them immediately afterward.

The family members who had waited until morning didn’t escape the war—some lived, some died, and some were sent to labor camps.

Aboard the red, white, and black replica ship, I paced the deck, hearing the acacia and lauan wood creak, feeling the boards dip under my weight and then spring back slightly: approximately 30 strides from the bow to the stern, 7 from the port to the starboard side. I would never call it small, but it’s nothing compared with those cruise ships in TV ads. The shipbuilders had painted eyes onto the sides of the bow per tradition. On fishing junks, the eyes look downward in search of fish. On merchant and war junks like this one, the eyes look forward to the future. Amidships, on both sides, planks jutted out a little past the hull, each overhang about the width of a person. A placard helpfully answered my unspoken question—a place for sailors to relieve themselves directly into the water, giving new meaning to the term poop deck.

Standing aft, under a blissfully shady canopy woven out of rattan, I tried to imagine the world as the seafarers of the Qing dynasty might have seen it: an unceasing blue, waves and clouds that portended the will of the gods, a horizon line that was always just out of reach. I tried to imagine living in the bowels of this ship. Many sailors in East Asia worshipped Mazu, goddess of the sea. Many still do. They would have burned incense for her, packing the tight quarters with the earthy, grassy scent of mugwort, a tiny patch of land in the vastness of the ocean. These sailors also believed that festooning a ship with red rags ensured safe passage across rough waters, the more the better. I can’t help but giggle at the image of masts beribboned from top to bottom like the braids on a child’s prized doll.

I wonder how effective those rags were at protecting sailors from their spectacularly dangerous livelihood. During storms, even a ship of this size would have tossed violently. The crew of the Free China had only just departed Taiwan before they broke the rigging and had to get towed back. Unchastened, they departed a second time and made it as far as Japan before a typhoon broke everything. By the time repairs were complete, they had already missed the start of the race. Yet they decided to continue their journey to the United States.

In some ways, I understand their commitment to their cause. What had happened to them during the revolution was tragic but common. My maternal grandparents had also fled to Taiwan from China. When I was a child, my grandmother told and retold the story of how she and my grandfather had, in the dead of night, left behind everything they’d ever known. The family members who had waited until morning didn’t escape the war—some lived, some died, and some were sent to labor camps. Pregnant, my grandmother had run through a minefield with my grandfather to get to the junk ship that would take them across the strait, her pockets weighed down with hard-boiled eggs so they would have something to eat during the journey. While running, she noticed that her shoes kept sticking to the dirt. She asked my grandfather why. He simply replied, “Don’t look down.”

After arriving in Tainan, my grandparents lived in poverty. My grandfather sold cigarettes by the roadside under the sun. My grandmother salvaged discarded rice sacks so she could sew diapers for their children. Eventually, their conditions improved, but still they dreamed of returning to China. Their parents were there, after all, along with siblings, aunts, uncles. If they’d believed that sailing a junk might improve their chances of going home, they sure as hell would have done it.

There is a way in which older family members always look so much older than expected when one sees them after a long absence.

After 52 days at sea, the crew of the Free China arrived in San Francisco. They never made it to Sweden or, for that matter, Rhode Island (none of them wanted to set foot on a boat again). They got some international attention, but of course, the media coverage didn’t lead to regime change. I don’t know if any of the five men ever made it back to their homeland.

Compared with them and my grandparents, I am lucky. I can return to my birthplace in Tainan and see my family, though perhaps I don’t return as often as I should. This trip to Taiwan marked the first time I’d visited in years—first work had stopped me and then the pandemic. There is a way in which older family members always look so much older than expected when one sees them after a long absence. And there is a way in which, when one leaves, one takes care to look at their faces carefully because who knows if one will ever see those faces again? The pandemic only confirmed what seafarers have always known: every goodbye might be the last.

Before departing, I said goodbye to my 94-year-old grandmother, my last surviving grandparent. She pressed into my hands a beanbag toy I’d treasured as a child. She’d sewn it for me from scrap fabric; the design featured little sailing ships. I knew she was saying without words that old benediction: Yi fan feng shun, or, very roughly translated, “May the winds sail you safely back home.”•

Related Stories
You Are Here: A Tower to Show You the Way Home
You Are Here: Chinatown Is Worth Fighting For
A Space to Call Our Own