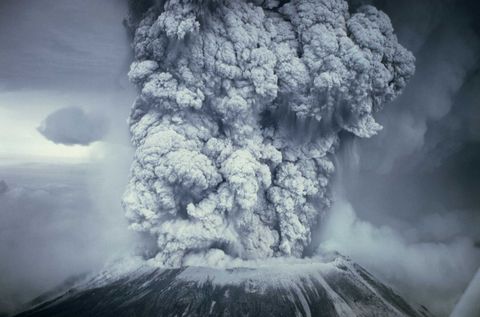 Robin George Andrews, my favorite volcanologist (which, I’ll admit, is an odd thing to have), has named the heart-pounding thrill of seeing a fiery volcano destroy a landscape the “volcanologist’s paradox.” I like to think I have a good excuse for churning magma being a guilty pleasure. For me, a multiracial, relatively new American, volcanoes symbolize the fragility of both the places they inhabit and the mythic identities we try to create in those places. My mother’s people were Nordic immigrants who abandoned icy homelands to remake themselves in America, moving farther and farther west. My father was a West African student who, after acquiring the tools to liberate his country from European colonizers, returned home. My family’s attempts to establish homes were fraught ventures, filled with sacrifice and secrets it took a volcano to unearth.

My Swedish grandfather wanted land. His desire caused him to drag the family to a valley in eastern Washington, a dry thumbprint bordered by the Rattlesnake Hills, an anticline ridge of dun-colored grass, and the Horse Heavens, gently rolling hills of flood basalt. The only Black girl in my school and in my family, I spent years wishing that another half Nordic–half Nigerian creature would come scuttling over the crest. At age 16, I gave up and got on a plane to Thailand.

During my year as an exchange student, I lived with a family who owned a gold shop in the center of Chiang Rai, a picturesque town just south of the so-called Golden Triangle, where Thailand, Laos, and Myanmar meet. Before dinner, my host siblings and I would lounge on the sidewalk out front. I liked to watch entire families piled onto a single bicycle or motor scooter, the freshly bathed kids in pajamas, necks ringed with Gold Bond Medicated Powder, and my host siblings liked to watch the families watch me.

One night, two apprentice goldsmiths yanked open the accordion security gate with a clatter and burst outside, shouting my name. “Your house, your house!” they cried. “It’s blowing up!”

“My house?” I snorted, picturing the tiny two-bedroom bungalow where my mother and I had moved after my grandparents had died. Ethically opposed to lawns in high desert, Mom had torn out the grass in the front yard and replaced it with rocks that absorbed the sun like charcoal briquettes. “How?”

Yes, our sagebrush-and-tumbleweed side of the state was prone to fires, but the landscape was gentle hills, not mountains. Any mountains, toward rainy Seattle, glittered with snow and icy streams.

“No, your house!” the youths insisted. The younger one dragged me inside and gestured at the small black-and-white television mounted high in the corner next to an altar with offerings of tangerines, lychees, and incense. There, on the Thai nightly news, a mushroom cloud curdled. The caption beneath explained that the American volcano “Helen” (which they placed in D.C., not Washington State) was indeed erupting.

I dropped onto a smithing bench, mouth open.

Wide-eyed, the workers glanced from me to the snowy screen and back to me.

I couldn’t speak. My grandfather and I had regularly gone camping at Mount St. Helens. Since when had she been a volcano? I would have been only slightly more surprised to learn that lava was burning through the National Mall, sending tourists and school groups screaming.

The next morning, my host father hustled me to the telegraph office to wire home. Mom telegraphed back, reporting that there was nothing to worry about. It was ash, not lava. Besides, Mount St. Helens was some 106 miles away.

In another month or so, I’d be home, with time enough to learn the real story.

Volcanoes should and shouldn’t be news. Of the 1,350 potentially active volcanoes worldwide, 20, according to the Smithsonian Institution, are actively erupting on any given day. Another 40 to 50 are in “continuing eruption status,” meaning that no more than three months passes without some sort of “event.”

Sicily’s Mount Etna (yup, that one), which has the distinction of being Europe’s most active and spectacular volcano, has been erupting on and off since September 2013—well, technically since 475 BCE. It’s literally old news.

Meanwhile, the United States, a relatively young nation, has the third-highest number of historically active volcanoes in the world. And yet, we’re always surprised when our landscape shifts. I wonder, is it a result of our blind faith in science and technology? The giddiness of postwar prosperity (itself a myth that doesn’t hold for marginalized communities)? Or does it originate even further back, in the hubris of white settlers and Manifest Destiny, the belief that a nation chosen to “acquire” the West should be able to beat the very elements?

Just as the pandemic had us turning to science and art to make sense of a new world, a volcanic event invokes religions, of a sort. We beg science to quantify what our eyes struggle to process, even as we suspect that science can’t save us. We ask literature to give language for what’s happening, philosophy to explain why. We search for signs in tarot and mythology. A primal portal to an unknown world has cracked open, pulsing with possibility. The gods may have warned us not to look, but like every mortal, we just can’t help ourselves.

With his trademark science-meets-mythology approach, Andrews describes volcanoes as if they were goddesses, churning and convulsing, weeping from their wounds, then falling into temporary repose. Volcanoes are the earth’s heart beating, he writes. “This ongoing destruction is accompanied by a kaleidoscope of aesthetic wonders: Incandescent ink, with hues of crimson and burnt orange, pours into the cerulean sea; streaks of purple lightning dance around skyscraper-high lava fountains; curtains of molten rock spill out of a newborn lithic coliseum, creating the youngest land on Earth.”

I sat, wide-eyed and speechless, on the sofa while she blew up my history.

My creation myth coincided with the volcanic eruption that permanently rearranged our landscape. The semester before I left for Thailand, when I applied to the international-exchange program, my mother was forced to reveal a series of secrets she’d been keeping for 16 years. Like dominoes, they fell, one after the other: No, she couldn’t produce papers proving custody of me, because there had been no divorce. Because my parents had never married. Because her father, the Nordic grandfather who raised me, had separated them and eventually disowned her. Because she had run away to a home for unwed mothers. Where I’d been born. Boom.

I sat, wide-eyed and speechless, on the sofa while she blew up my history. A few months later, I flew off to Thailand, and a few months after that, Mount St. Helens erupted in one of the greatest and most destructive volcanic explosions ever recorded in North American history. Entire populations of animals were wiped out, the sky darkened, and 106 miles due east, the streetlights in our town clicked on in midmorning. By noon, it was raining ash in our streets, and after that, we were no longer high desert.

The planet is alive, always in motion, always remaking itself.

Volcanoes remind us that destruction and rebirth occupy the same womb. The planet is alive, always in motion, always remaking itself. This year started with a massive 12-mile-wide volcano breaking records with a 35-mile-high eruption in Tonga. Meanwhile, Iceland’s Fagradalsfjall continued to leak brilliant orange fingers of lava over a blackened, otherworldly landscape. In the summer, scientists released a study about Mount Nyiragongo, which erupted last year entirely without warning, sending Congolese racing for the Rwandan border.

A few years ago, friends and I spent six hours scrambling over sharp, glossy lava rock to summit Nyiragongo and camp on its lip. After dinner, we gathered around the caldera and stared hypnotized at the burbling, glowing lava lake below. It was liquid; it was fire; it was terrifying. Not one of us could look away.•