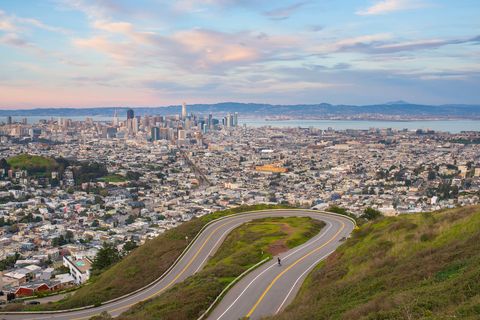 I’m a morning Twin Peaks person. In the way that I’m a winter Tahoe person and an East Coast summer person and a San Tung dinner person. A person who prefers a particular place at a particular time.

The people who show up on Twin Peaks roughly between 7 and 9 a.m., though, are my people. I may not know their names or, really, anything about them—but I consider us an unspoken community of sorts. Each of us crawling around these two hilltops in our own way. We see this place in a similar light. At 922 feet, Twin Peaks is the second-highest natural point in San Francisco (just a few feet shy of Mount Davidson, the highest). A pair of adjacent rocky, rust-colored hilltops covered in coastal scrub spanning 64 acres and flaunting panoramic views from the Golden Gate Bridge to the north across the sparkling bay to Mount Diablo in the east.

I often see my actual friend Lisa Brown “walkin’,” as she calls it. But mostly, it’s a series of familiar strangers: Here’s the auburn-headed woman with her matching mini auburn-bodied dog. The white-mustached man and his floppy-hatted woman-friend, who wear reflector vests in the sun, picking up trash as if they’re city employees. The two maybe-married dudes who amble quietly alongside each other, one a little bowlegged, like he used to play a lot of soccer, who offer hearty waves as I pass. The guy with the long, gray ponytail who shuffles along, always alone. He never smiles but always gives me a thumbs-up, or a fist pump, sometimes one of those double-gripped victory clasps. As if I’ve done something more remarkable than simply run by.

They don’t know that I used to be a proudly anti–Twin Peaks person.

In March of 2020, both entrances to Twin Peaks were closed to automotive traffic by the City of San Francisco, as part of its effort to expand pedestrian and bicycle routes for people otherwise sheltering in place against COVID-19. For the first time, in all my years of running in the city, I laced up and ran toward the sky.

Before, I’d always run down, from my house on a nearby hill of its own, in Cole Valley, to Golden Gate Park and along Ocean Beach. Then, early in the pandemic, my route took me through neighborhood streets lined with shuttered storefronts and more tents than ever before and showed me angst, anger, and, it seemed, all that was wrong with San Francisco and our new world. Whereas pandemic-era Twin Peaks was a reminder of all that was still right.

After nearly three years, my fellow once-masked morning people have become as much a part of Twin Peaks’ landscape as the rising sun and snaking fog and swaths of graffiti.

Who am I to them, I wonder. The middle-aged maybe-mom who—really?—runs every day? That short woman wearing a rotating mix of leggings and ridiculous woolly hats? Happy she didn’t have to do school drop-off? Who has just lost cell service while talking to her friend? And now is back to listening through tangled headphones to Michael Barbaro and NPR’s Up First and maybe KQED’s Forum if she got a late start? And sometimes to the deafening wind, or nothing at all.

What they don’t know is that I used to be a proudly anti–Twin Peaks person. “Favorite views” is an actual thing people in San Francisco talk about—though less frequently than, say, best burritos or the whole snoozy “San Francisco versus New York/Los Angeles/anywhere more affordable” question. And when the subject would come up, I’d say, often to no one in particular, “I hate Twin Peaks.” I’d tout instead the superiority of other, less popular vista points, those unmarred by metal fences and glass-strewn parking lots and scavenging crows and blurry telescopes charging 50 cents a peek. Twin Peaks had too many tourists. Too many bus tours. Too many winding curves for running without worrying about being hit by a careening car.

But then the roadways into and out of Twin Peaks closed to cars, and I’ve been running up there ever since. During the first month of homeschool, I ran with my second-grader son—a deal he struck in return for a Nintendo Switch. Occasionally, I run with a friend. Never with my new dog (despite everyone telling me, “It’s fun to run with your dog!”). But usually, happily, I run by myself. Up and down and around the electric-green knolls and crumbly cliffs and back again, never bored, turning the maybe three-mile out-and-back into six, sometimes more. Staying to the right of the double yellow lines while pelotons of spandexed cyclists speed down on the left. Sprinting along the smooth, flat curves at the top, admiring our Emerald City of Oz. Clambering over the metal barriers, moving between cement and trail. Muddling through the muddy sections after a rare rain. Brushing past dewy prickers of dormant blackberry bushes. Climbing the steep, uneven, wooden stairways to heaven.

Sometimes, the fog known to locals as Karl is so thick, it’s a whiteout equivalent to a winter drive over Tahoe’s Donner Pass. Other times, the view is so glassy and sharp, downtown so distinct and shiny, I feel like I just got LASIK surgery. On September 9, 2020, a.k.a. Orange Sky Day, when wildfires infamously turned our Bay Area skies a deep, disturbing hue, I was all alone up there, flanked by fiery-colored rocks, slicing through an eerie, yolky soup, and it felt like…Mars.

In Twin Peaks’ long, storied history, I am, of course, but a blip.

Though impassioned citizens petitioned to keep Twin Peaks’ roads closed, the city reopened the south gate in March 2021, permitting cars to drive as far as the vista point. (The north gate and roadway remain closed.) There’s more garbage now, and cars have resumed careening, if fewer than before. It’s still glorious.

I’ve pounded over asphalt coated in declarations of Valentine’s Day love to someone named Daniel, and I teared up passing a freshly painted, blue-and-yellow promise to “Stand with Ukraine.” I’ve cruised by the assertion that “Luis Fucks” and the generally agreed-upon fact that “Greed Sucks.” For weeks, a once-white T-shirt lay twisted in the dirt. I kept leaping over it wondering whether anyone would pick it up, whether I should pick it up. (I should’ve. I didn’t. Eventually, though, someone did. Maybe the mustached man in the reflector vest?)

The cultural history of these twin grassy hills dates back at least to the Ohlone, who say they were once a single peak: a married couple who disagreed so often that the great spirit separated them. In Twin Peaks’ long, storied history, I am, of course, but a blip. Barely qualified to pen an ode. I’m not Cool Gray City of Love author Gary Kamiya, who deems a hollow on a slope of the south peak the quietest spot to sit in all of San Francisco. Or fifth-generation local Lynn Oakley, who lives on a hill in the house her grandfather built, the first on Twin Peaks, a hundred years ago, before roads and electricity. I’m not even a Bay Area native who partied up there throughout high school or someone who hired a professional photographer to capture their engagement or one of the helmetless skateboarders who have been cruising this figure eight forever, twisting and turning and somehow never crashing.

All I know about Twin Peaks, really, is how it makes me feel while lapping around it: lucky to live here, lucky—as running always makes me feel—to be alive.

The other day, though, I learned something new. “Hey, look,” the gray-ponytailed guy said, stopping me mid-stride. I looked. Saw nothing out of the ordinary. What? I said, muting Michael Barbaro and talking, it turns out, to Tom. “It’s growing back after last summer’s fire.” What’s growing? What fire? I guess I’d been back East. “The coyote brush,” he explained, pointing to pops of bright green breaking through snarls of blackened roots. “I’m up here every day, after all,” he said. “I notice things.” I smiled, gave him a thumbs-up, and ran on.•