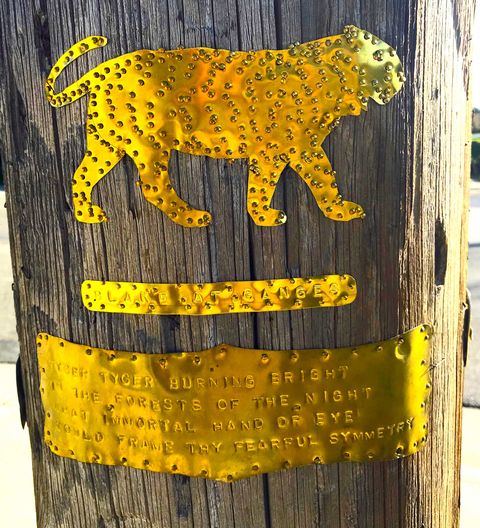 Courtesy of the Artist

When friends visit me in my El Cerrito neighborhood, I like to walk them to the corner of Blake Street and Ganges Avenue and ask them to close their eyes as we near the telephone pole there. Hammered into the pole at roughly eye level are a tarnished brass plate in the shape of a tiger, a rectangular strip reading “Blake at Ganges,” and below that a plate stamped with the first stanza of William Blake’s poem “The Tyger” from his illustrated collection Songs of Innocence and Experience, published in 1794:

Tyger Tyger, burning bright,
In the forests of the night;
What immortal hand or eye,
Could frame thy fearful symmetry?

My companion might admire the craftsmanship of the many small nailheads, whose patterns are meant to suggest the tiger’s stripes. People seeing this brass feline may fondly (or not so fondly?) recall the poem from their high school English class. They may also notice the absence of an identifying signature or initials. This is the street art of El Cerrito, created by one anonymous artist, who happens to be a friend and neighbor.

El Cerrito (Spanish for “the Little Hill”) is a city in Contra Costa County, California, with a population of 26,444. Acknowledged as the home territory of the Chochenyo-speaking Ohlone people, xučyun (Huichin) stretches from the shore of the bay to what we now call the Berkeley Hills and from El Cerrito to West Oakland.

Contemporary El Cerrito has odd roots as a kind of close-in exurb. With its history of ranching and quarrying along with some wild nightlife on San Pablo Avenue, the town had roadhouse joints as seen in certain old movies. Like other East Bay cities, El Cerrito gained residents after the 1906 earthquake left San Francisco in ruins, and since incorporating in 1917, it has become something of a bedroom community.

Over the years we have lived in our home, I have taken many walks through our neighborhood, noticing the well-tended or overgrown gardens, the little libraries, or maybe some milkweed growing along narrow sidewalks. Flaxleaf paperbark and bottlebrush trees line the streets. On some evenings from our balcony, my husband and I watch the light above the rooftops turn an incandescent gold, then deep red (depending on air quality), accompanied by the ever-present sounds of BART trains passing through late into the night. On weekends, we pick up Italian cookies from Giovanni’s, the local market, and bring them to neighbors. Friends might bring us homemade plum ice cream or bags of lemons from their trees. With some of these neighbor-friends, we have shared backyard movie nights, birthday gatherings, and show-and-tell parties to help us get through the pandemic era.

Outside Giovanni’s, the rusted top from an old tin of anchovies is nailed to another telephone pole with a few silvery metal fish escaping from within. This piece too is courtesy of El Cerrito’s mystery artist and his whimsical mind. A self-described “late bloomer” to clandestine art-making, he started creating these often-small objects in his early 50s. There is not a lot of street art in El Cerrito, so it’s not a crowded and competitive field, and he likes it that way. Though often quiet and understated, my friend has been known to suddenly drop a darkly humorous pun at a backyard get-together or break out singing a Buzzcocks song to the delight of everyone present.

An old tin of anchovies with a few silvery metal fish escaping from within, mounted on a telephone pole by El Cerrito’s mystery artist.
Courtesy of the Artist

So how did I meet this “anonymous” artist? My husband and I and our longtime friends both closed on the purchase of our homes on the same day. They live a mere two blocks away. Walking distance. The artist happened to see a photo of our neighbors’ new house posted by a friend on social media; he immediately recognized it because he occasionally walks his dog by their home. A few days later, he brought by a tub of homemade ice cream to welcome them to the neighborhood. Soon after, the artist and his partner joined the four of us for a dinner party, and we’ve honored his secret ever since.

In the early days of COVID, it was announced that our town had turned off the crosswalk buttons used to request a green walk sign. (The decision was made in an effort to minimize exposure to COVID.) In response, the artist fashioned a small white-on-black skull sticker from electrical tape, which he used to cover the “walking man” graphic above the crosswalk button. He meant it as a “vividly contemporary memento mori in the form of a practical public health warning,” he says. It was removed, presumably by the city, a few months later. On another local street, he installed a butterfly-winged bat, using insulated wire to suggest a bat’s bony wing framework. It too disappeared one day, along with the entire telephone pole. Although these were among his personal favorites, he’s learned not to expect all such projects to last.

Some projects are inspired by the artist’s own pet peeves. Many suburban residents are familiar with finding little baggies in their driveways, stuffed with small advertisements and rocks to weigh them down. The artist recalls, “They used to drive me nuts. It’s stupid to throw a rock into the trash, so I’d tear them open first to get the rock out. Then I realized that I could employ the same method to deliver some kind of art or message or prank.” He has put in neighbors’ driveways items such as a fake flyer for an intentionally bad landscaping service called “The Shady Rake” and a list of off-the-wall “recycling tips”—for the rock, paper, and plastic just delivered. One such piece even got someone upset on Nextdoor (not hard to do), yielding responses about who could have done this, whether it qualifies as art, and so on. A lot of people noticed his creations and liked them, but the final comment, “If that’s art, then I’m Pablo-friggin-Picasso,” made his day for expressing an opinion he knows is common but that he would never directly hear.

Other works by the artist include a small white-on-black skull sticker made from electrical tape, a metal butterfly-winged bat, and a rock-exchange kit.
Courtesy of the Artist

The artist has also spray-painted stenciled words or short phrases onto small picket signs and placed them around town—along the BART line or in vacant lots. Messages have included “Feral,” “Wildlife Zone,” “Dys Place,” and “Why a Duck” (à la Marx Brothers joke, here featuring a duck shape—this one planted in the mud at Aquatic Park in Berkeley). He has since turned one of these signs, reading “Vote,” into postcards and posters for use in election seasons. The postcards were shared with volunteers and sent to thousands of voters to support liberal candidates.

Most people assume that artists want to be recognized for their work. When I ask my friend why he prefers to remain anonymous, he explains that he doesn’t want the scrutiny: “I just can’t think of a good reason to be public about it. Attention to myself in this area seems beside the point. My pieces are kind of simple. Though, of course, I want people to like my work, I don’t really need to hear what people think of it, good or bad. So, I’m more obscure than secretive. Anyway, I’m still interacting, in a sense, with anyone who sees my work, but particularly with neighbors.”

I imagine the momentary puzzlement followed by appreciation of someone on a walk discovering a humble horseshoe on a phone pole in front of the 7-Eleven, or any number of other pieces my friend has done around town. I feel fortunate to be a friend and neighbor of this mystery artist, an enthusiast of getting to know your neighbors and of anonymous culture jamming. A geography major in college, he offers, “I see my street art as a way to make some kind of contribution to my cultural environment. I’m trying to connect with others about imagery, ideas, or locations that have meaning for me. I’m trying to enhance a ‘place’ and make it more special somehow.”•