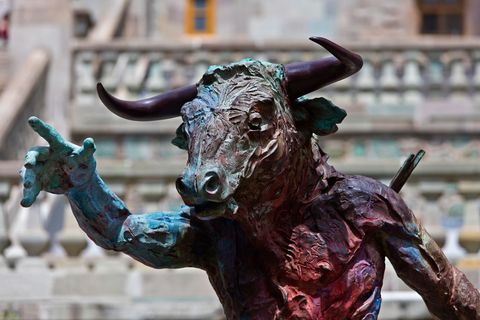 According to Greek mythology, the Minotaur was a beast hidden in a labyrinth by King Minos. With the body of a man and the head of a bull—born from the union between a woman and a bull—he fed on flesh. Every nine years, Athenians were required to deliver young people to the labyrinth, as tributes to be savaged. The myth’s climax hinges on the conquering of the monster: a mythical hero, Theseus, joined young people as a sacrifice but secretly planned to vanquish the Minotaur. King Minos’s daughter Ariadne gave Theseus thread to unravel in the labyrinth as he went to confront the Minotaur, a thread that allowed him to find his way out of the maze again.

What is it about the figure of the Minotaur that compels such intense fascination from poets and artists? For it’s not heroic Theseus or clever Ariadne who most captivates them, but the monster at the center of the maze. In 1998, after years of silence around his marriage to poet Sylvia Plath, Ted Hughes published an autobiographical collection, Birthday Letters, that included the poem “The Minotaur.” Plath is pictured as a Minotaur of destructive rages, smashing Hughes’s mother’s sideboard when he’s 20 minutes late to watch their child. But there is a double ambiguity; perhaps it is her father or her father’s grave that is the Minotaur, “horned, bellowing” and the horrifying source of Plath’s twists and turns of mood. Plath herself wrote about a picador felled by a bull in “The Goring.”

Conjuring the Minotaur as a symbol for the dark, secret recesses of a person—Hughes’s antagonizes by telling Plath that she never shows her real self in her poems—is the most straightforward, perhaps least labyrinthine way into the myth. However, in drawing from the Minotaur for inspiration, several poets have approached the myth by other corridors, laying out their own thread. For instance, in Dana Gioia’s 1991 “Maze Without a Minotaur,” it is the labyrinth of one’s own heart that terrifies. The speaker references a “dark maze without a minotaur, / no monsters but ourselves. / Yet who / could bear to see it all?” The poet James Merrill inverts the Greek myth in his 2001 poem “Minotaur.” The poem’s speakers are the tributes, but they are old, rather than young, praying to be eaten. Merrill makes the myth his own, in part, by referring to an ink sketch by poet and filmmaker Jean Cocteau, who likewise called upon the Minotaur to craft a private mythology.

But as you navigate Postcolonial Love Poem, the California Book Club’s selection for February, you might notice that Natalie Diaz’s Minotaur carries a different resonance. In her conception, the Minotaur is less a figure of violence than of longing, of twoness—bull and human. In “From the Desire Field,” the speaker notes, “But sometimes when I get my horns in a thing— / a wonder, a grief, or a line of her—it is a sticky and ruined / fruit to unfasten from.” The speaker implies that she is the bull in her feelings, anxiety turned desire, rather than an agent of brutal action.

The body of the speaker’s lover is the labyrinth in Diaz’s “Asterion’s Lament.” Asterion, the Cretan name for the Minotaur, was also referenced in “The House of Asterion,” a short story by Jorge Luis Borges told from the perspective of the Minotaur. In Diaz’s poem, the speaker is reverent toward the beloved’s perception of her: “And if you can close your eyes to the Minotaur / in me, with her heavy twist of horns, I can find you.”

In “I, Minotaur,” the speaker expressly situates herself as Minotaur, defamiliarizing the ancient myth further. She writes, “In my chest I am two-hearted always— / love and what love becomes.” She frames the postcolonial self, the fusion of Indigenous and American, as a Minotaur. The American side, bull-like, violent. The metaphor for conquering and rape is rendered explicit with the line “I am your Native, / and this is my American labyrinth.” She reveals, “I know what it’s like to be appetite of your own appetite, / citizen of what savages you.” It’s an inversion of the Minotaur mythology, a casting of the Minotaur as a destroyer of self, not others.

“I, Minotaur” alludes to Picasso’s 1935 etching, “Minotauromachy,” in which a girl confronts a Minotaur in the dim, confined claustrophobia of a chaotic room. In the image, intense fear is palpable in a horse’s expression, the female bullfighter’s state of frontal undress. But the young girl in the etching exudes calm, bearing flowers in one hand, a candle in the other. •

On February 17 at 5 p.m., Diaz will be in conversation with CBC host John Freeman and a special guest. We hope you’re enjoying this collection. Take a moment, as you read these poems, to visit the Alta Clubhouse to discuss Postcolonial Love Poem with your fellow California Book Club members.

Diaz shares her experience of poetry as a practice that allows her to be more than the sum total of America’s violence. —Alta

Here are 15 exciting fiction and nonfiction titles publishing this month about or from the West. —Alta

QUEEN OF THE GOTHS

Lisa Locascio Nighthawk, a novelist and the executive director of the Mendocino Coast Writers’ Conference, writes about the effect the recently deceased gothic novelist Anne Rice, of whom her mother was a fan, had on her own career. —Electric Lit

Viet Thanh Nguyen, the Pulitzer Prize–winning author of The Sympathizer, writes an op-ed about the recent book-banning controversy and the importance to democracy of engaging in difficult conversations with children about what those books say. —New York Times