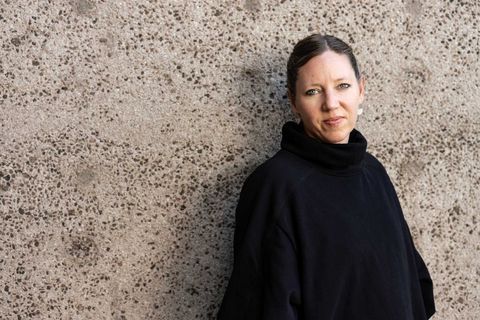 My mother is a teacher of fiction. She has read every novel under the sun. She wrote her master’s thesis at San Francisco State on Mrs. Dalloway while pregnant with [my sister] Emily. To celebrate a poetry publication of mine years ago she sent me a card that read: “We tell ourselves stories in order to live.” —Joan Didion. At the time I was living in a closet on St. Mark’s Place, and I pinned the card to the crumbling wall to remind me of her support, her thoughtfulness.

But the more I looked at the card, the more it troubled me. My poems didn’t tell stories. I became a poet in part because I didn’t want to tell stories. As far as I could tell, stories may enable us to live, but they also trap us, bring us spectacular pain. In their scramble to make sense of nonsensical things, they distort, codify, blame, aggrandize, restrict, omit, betray, mythologize, you name it. This has always struck me as cause for lament, not celebration. As soon as a writer starts talking about the “human need for narrative” or the “archaic power of storytelling,” I usually find myself wanting to bolt out of the auditorium. Otherwise my blood creeps up to my face and begins to boil.

I feel strongly that your family’s story of struggle and hope has great relevance to our audience, the young CBS producer wrote. What story was he talking about?

The paradigm of faulty family stories for me has always been that of the demise of my great-uncle Don, who died of MS back in Michigan years ago. Visiting him as a small child terrified me: he lay motionless in his bed after a tracheotomy and greeted us in husky vibrations mysteriously amplified from a dark hole in his throat. Whenever I asked anyone what had happened to Uncle Don to put this hole in his throat and keep him in bed, I always got the same answer: It all started one day when Uncle Don stepped on a piece of glass at the beach. He was never the same after that. It took me years to understand that while this day at the beach might have marked some kind of change in his condition, whatever he stepped on there did not cause his MS. But to this day, the relationship between this piece of sea glass and his eventual neuromuscular meltdown is, in family lore, cement.

During the Middletown winter of murder mind, I was required to teach a course on “narrative theory” at the university. I dismantled the inherited syllabus and made everyone read Beckett, along with an essay about brain damage, then turn in papers focused on the swirling disintegration of storytelling in Endgame. Several students seemed to miss the point—assuming there was one—and turned in papers that argued something along the lines of, If only Hamm and Clov could have told coherent, sturdy stories, they might have found lasting happiness. I was brutal on these papers. Several students complained that I seemed unusually hostile to their ideas.

“Nothing is funnier than unhappiness,” I repeated back to them, feeling the whirring of some vague, teacherly sadism, clearly in excess of the situation at hand.

How did she end up at the bottom of the River Ouse?

I know what I want is impossible. If I can make my language flat enough, exact enough, if I can rinse each sentence clean enough, like washing a stone over and over again in river water, if I can find the right perch or crevice from which to record everything, if I can give myself enough white space, maybe I could do it. I could tell you this story while walking out of this story. I could—it all could—just disappear.•

This essay is adapted from The Red Parts: Autobiography of a Trial (Graywolf Press, 2016).


Maggie Nelson Maggie Nelson is the author of many books of poetry and prose, including the National Book Critics Circle Award winner The Argonauts.
Advertisement - Continue Reading Below
More From California Book Club
For Love and Money
Trying to Get Away
Advertisement - Continue Reading Below
A Different Kind of Bildungsroman
Don’t Call Him Gay Ulysses
Excerpt: ‘Less’
California Book Club: Jaime Hernandez Transcript
Event Recap: Jaime Hernandez
Announcing the Special Guest for Jaime Hernandez
Five Books and Movies For After You Finish ‘Maggie
The Shock of the New